The Gun-Control Activist
3/5
The Police Officer 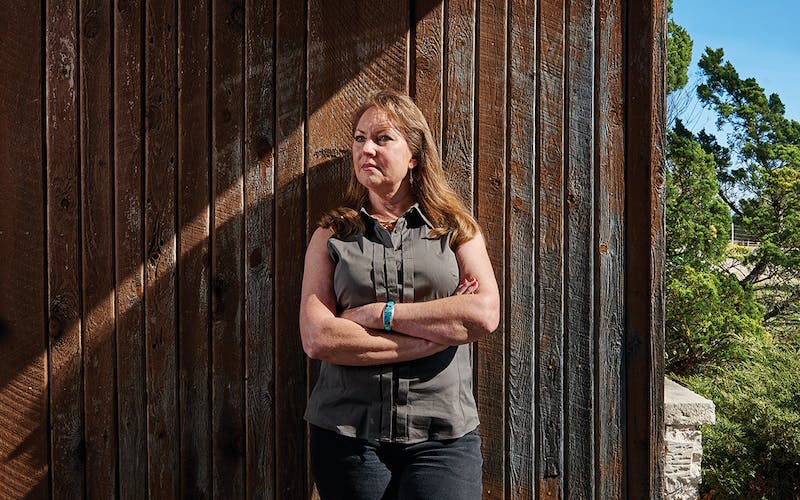 I did not grow up in a house with guns. When I was eighteen and moved out on my own, a friend of mine gave me a handgun and taught me how to use it. Fast-forwarding a bit, I went and became a chiropractor, and shortly after that, in my first year out of school, one of my patients was an assistant DA in Harris County. I was living just outside Houston, in Pasadena. He used to come in on a regular basis and would ask me about my gun. And I would tell him, “You know, I don’t carry it with me all the time, because, of course, that’s illegal.” I remember vividly him saying, “You need to carry it. You’re a single woman in a big city. You need to carry it.”

I did begin to carry it. At that time, it was illegal in the state of Texas. But I bought a purse that was specially made for concealed carry. Didn’t carry it all the time, but I carried it much of the time.

In 1991 I was with my parents at a local Luby’s cafeteria in Killeen. We were eating lunch with a friend of mine who was also the manager of the restaurant. We’d finished eating when a madman drove his truck through the window and very methodically began executing people with a handgun. And it took a good 45 seconds, which is an eternity, to realize that that’s what he was there to do. At that time, the mass shootings that we see frequently now were not occurring. So it wasn’t the first thing that came to your mind.

My purse was on the floor next to me. I actually reached for it. I used to carry that gun in my purse, but I’d taken it out about three months earlier, leaving it in my car, because I was concerned about losing my license to practice as a chiropractor. I was afraid that if I got caught, I’d go to jail. So my gun was a hundred yards away, completely useless.

Could I have hit the guy? He was fifteen feet from me. He was up. Everybody in the restaurant was down. I’ve hit much smaller targets at much greater distances. Was I completely prepared to do it? Absolutely. Could my gun have jammed? It’s a revolver, so it’s possible, but is it likely? Could I have missed? Yeah, it’s possible. But the one thing nobody can argue with is that it would have changed the odds.

Twenty-three people were killed, including my parents.

I’m telling you, we were like fish in a barrel. Sitting there waiting for it to be your turn is not a fun place to be. Anyone who thinks differently, I try to put them in that same situation in their mind, only instead of having their parents with them, having their kids with them. And as that madman is leveling his weapon at your two-year-old’s forehead, even if you’ve chosen not to have a gun, don’t you hope the guy behind you has one and knows how to use it? To me, it’s cut-and-dried.

I decided to talk to the media, and I made it crystal clear that I was mad at the Legislature, because they had legislated me out of the right to protect myself and my family. Even now I get angry thinking about it. That’s always been my dominant emotion. I get—not sad—I get angry.

I’ve been on every slime-bag talk show you can imagine—and some of them twice. I would always wash my hands well after I finished, but I think I’m glad I did them. I testified in a couple dozen states and hopefully helped to change a vote or two.

People would ask me to run for the Legislature, but I held off for a long time, because I couldn’t afford it. As you well know, the Legislature here doesn’t pay. So eventually when we felt like we could afford to have an absence from my clinic, I ran and was fortunate enough to be elected.

It was a great experience. If money were no object, I would run for office again in a heartbeat [Hupp left the Legislature in 2007]. It was really a wonderful experience overall, though Lord knows there were moments when a stiff drink was called for.

Huge strides for gun rights have been made not only in Texas but across the U.S. When I first started doing this, there were only a handful of states that had any kind of concealed carry at all. Now I think all states do. Some of the laws are still a bit onerous.

One of my bugaboos is gun laws. Anytime we list a place where you can’t carry guns, to me, that’s like a shopping list for a madman. If I’m a crazy guy who wants to rack up a high body count, I’m not going to go to an NRA convention. I’m not going to go to the gun show or places where there are thousands of guns in the hands of law-abiding citizens. I’m going to go where somebody has said that guns aren’t allowed. If you think about nearly every one of these mass shootings, they have occurred at places where guns weren’t allowed. That’s frustrating to me, particularly when you talk about schools. Where do these madmen go? They go to schools and slaughter people.

The Gun-Control Activist
3/5
The Police Officer