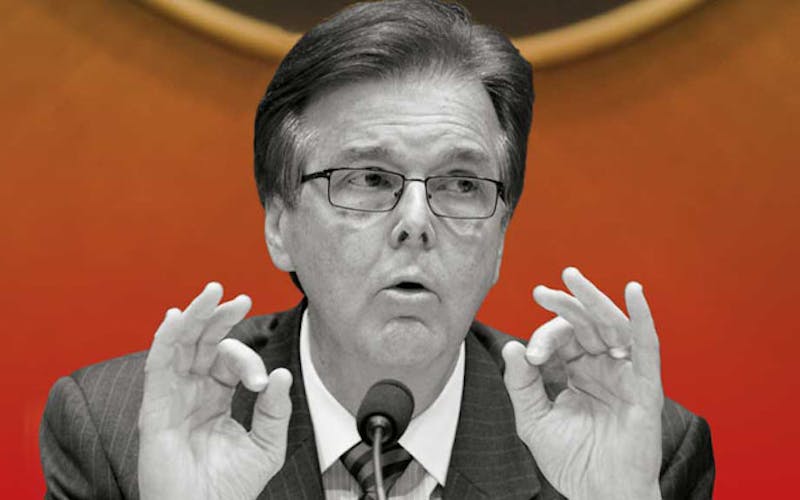 There are few types of lawmakers less helpful to the legislative process than bullies and ideologues. Unfortunately, Dan Patrick too often seemed to be both in his first session as the chair of the Senate Education Committee. The Houston radio host fell into a habit of lecturing his fellow legislators, interrupting witnesses, and accusing those who disagreed with him of simply not understanding his bills. In short, he ran his committee like he runs his talk show, where the only opinion that really matters is his own.

Consider an early exchange with Commissioner of Education Michael Williams. “I just want to be on the record that we have not stepped back in rigor,” Patrick told him during a hearing on his bill to drop the number of end-of-course exams from fifteen to five and overhaul graduation requirements. “Mr. Chairman,” Williams politely said, “allow me to respectfully disagree.” But before he could continue, Patrick pounced: “Well, excuse me, Commissioner, that’s what the bill is. How can you disagree?” This behavior might win radio listeners, but it doesn’t work in the Senate.

Patrick clearly dreams big and works hard, but his high regard for his own efforts and his flair for the overdramatic often backfired. As one Republican insider put it, “At some point the other members got tired of his ‘noble causes’ and Jimmy Swaggart tearful moments.” At the session’s outset, Patrick dubbed school choice—another of his major priorities—“the civil rights issue of our time.” Fine, but during a March committee hearing, he also tried to argue that keeping homeschooled and private school students from competing in the University Interscholastic League was tantamount to excluding blacks from such sporting events in the pre–civil rights era. Patrick did enjoy some victories this session, including the bipartisan passage of his charter school bill and the controversial decision to dismantle CSCOPE, the curriculum-management tool that he insisted had an anti-American bias and was “shrouded in secrecy.” But Patrick’s stance on transparency wasn’t consistent: he made the audacious—and ultimately unsuccessful—attempt to have Republican senator Kel Seliger’s “dark money” bill, which would have required politically involved 501(c)(4) nonprofits to disclose their donors, recalled from the House one day after he had voted for it.

Did Patrick learn any lessons from his behavior? Not at all—he’s considering a run for lieutenant governor in 2014, which means his demagoguing has only just begun.