For many Texans, the winter storm and the failure of the Texas grid has begun to recede from day-to-day consciousness, becoming something of a bad dream that has been happily left behind. But in the white, three-bedroom home on Berry Street in Houston’s Third Ward, where Ricarro Middleton lives with his four young children, fianceé, and sister, the nightmare is impossible to move on from because it hasn’t ended.

The Middletons’ pipes froze, and eventually burst, during the storm, and for the past six weeks the family hasn’t had running water. Their toilet works only from time to time, and faucets in the home offer little more than a drip. They subsist on bottled water for drinking, cleaning, cooking, and, occasionally, bathing. Middleton, who lost his job during the pandemic and remains on a limited budget, estimates that every week he spends about $50 on water and $250 on hotel rooms so his family can take hot showers. In an effort to save as much money as possible, he rations his children’s water usage, making sure nobody drinks more than six 16.9-ounce bottles per day.  “My kids ask me every day, ‘Daddy, is the water coming back?’” Middleton, said, shaking his head. “I say, ‘Yeah it’s coming back, we just have to wait.’ As a dad, it’s hard when you feel like you’re lying to your kids.”

The truth is that the 34-year-old father has no idea when water will be restored. Many neighbors living in a dozen or so households on surrounding blocks in the heart of Houston’s historically Black Third Ward are also without it. This week, Texas Monthly met with five of them, all of whom continue to battle the aftereffects of February’s storm, including broken pipes and water-damaged rooms, black mold, badly needed home repairs that might cost thousands of dollars, power outages—and now threats of eviction. The residents all have something else in common: a landlord, J. Brad Batteau, who, they say, refuses to fix their homes in a timely manner. They now find themselves in an increasingly bitter dispute—involving allegations by Batteau that his tenants have committed arson on his property—that Houston mayor Sylvester Turner has gotten involved in.

Left: Ricarro Middleton stands outside his home with two of his daughters.

Top: Ricarro Middleton’s toddler drinks bottled water at a residence in Houston’s Third Ward that hasn’t had running water since February’s winter storm. Middleton says he’s tired of promising his children the water will return, only to continue disappointing them.

Some tenants say Batteau, who has run for city council multiple times, isn’t a “bad guy,” but that he’s unable to manage the dozen or so homes that he owns in the area. But other residents have lost all trust in him and believe he’s unwilling to spend the money required to maintain his properties. Humi Jackson, a program coordinator with the Black United Fund of Texas, a nonprofit that does philanthropic work in Black communities, has been working closely with Batteau’s tenants to get their homes fixed. She said the landlord has refused to pay for repairs, claiming that his tenants are responsible for them while also refusing to sign off on the contractors they have attempted to hire. A copy of the tenants’ lease agreement obtained by Texas Monthly states that “major maintenance and repairs” are the landlord’s responsibility.

Reached by phone, Batteau justified the lack of repairs, saying all who had gone long periods without water were behind on their rent, and denied that he had stopped anyone from hiring plumbers. He too had been without water for a while and said he felt personal responsibility for fixing others’ pipes, some of which he did repair. But he said he didn’t have the money to pay for fixing all of them because residences he owns had sustained as many as fifteen broken pipes each, many tenants were behind on rent, and his home burned down in the middle of March.

He then alleged that tenants had ignited the blaze but, as of press time, did not provide evidence for his claim. Asked about Batteau’s allegations, Jackson said the landlord is engaged in an audacious campaign to avoid his legal responsibility to fix his tenants’ homes.

The dispute has now risen to the attention of Houston officials. Councilwoman Carolyn Evans-Shabazz, whose district includes Third Ward, and Mayor Turner have been in touch with Batteau in recent days and have urged him to hire contractors to complete the repairs, but he has refused because of fears that he would not be able to pay them back and liens would be placed on his properties. Evans-Shabbazz is coordinating with several nonprofits to provide the residents with food, rental assistance, and water while negotiations with Batteau continue. “You have children, small children—somebody had a five-month-old baby in one of these homes—as well as elderly people,” she said. “I just don’t understand how you can treat people that way.” 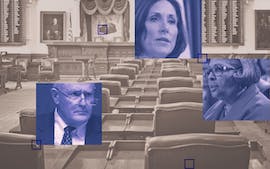 “I know he’s run for public office several times and this is what you do?” she added, moments after she received a text saying that Batteau was now threatening to evict tenants. (Batteau later confirmed he was considering evicting every tenant of his who was behind on rent, which he said was all but one.)“This is an indication that you’re no public servant at all.”

As the dispute proceeds, some of the tenants would like to relocate within Third Ward, where they have lived for decades. But the neighborhood is gentrifying, and affordable housing has become difficult to find, so many find themselves stuck. “Third Ward is the heart and soul of Houston,” Jackson said, “but these residents aren’t feeling like that at the moment.”

A week after the winter storm and the failure of the Texas grid, some 14 million Texans went without access to safe drinking water, and 350,000 had no running water at all, according to the Texas Commission on Environmental Quality. Widespread pipe problems—one in four homes in Houston had damaged water systems—meant that some had to wait weeks for a plumber’s visit. But many in the residences Batteau owned have gone, or went, without running water far longer than most in the city.

In one of Batteau’s residences, three elderly Houstonians packed into a $300 per-month dimly lit one-room apartment, no bigger than many walk-in closets. One, a 72-year-old woman who uses a wheelchair and identified herself as “Mrs. Sarah,” said she’d been relying on bottled water since the February storm. Unable to walk, she’d been receiving water donations from friends like Flip, an elderly homeless man who lives underneath a nearby bridge and was now visiting her. Both were thirsty. Jackson promised to return with water later that afternoon.

Many of Batteau’s tenants said if Texans knew about the reality of their circumstances, they’d have a hard time believing it was unfolding in the nation’s fourth-largest metropolis, surrounded by museums, universities, and wealthy neighbors. “A 72-year-old lady in a wheelchair should never be without water,” Flip said. “What if she catches herself on fire with a cigarette and doesn’t even have a glass of water to put it out? This is a damn shame, y’all.”

A few blocks away, across the street from Batteau’s charred residence, I met Shannon Sublette, the director of a senior care facility in the neighborhood. She had been without water for forty days before Batteau repaired some of the many burst pipes in her three-bedroom gray clapboard home, which she shares with relatives. Before water was restored, every time one of the residents wanted to drink or flush the toilet, two young relatives were forced to turn on the main water valve near the street and then place a plastic bin in a crawl space beneath the home, where they were able to collect water from a broken pipe.

In a bathroom near the back of the house, water from a broken pipe was seeping through the floor. Down the hallway, inside Sublette’s bedroom, the overpowering stench of mold caused our eyes to water. Sublette opened a closet door revealing a damp, basketball sized hole in the drywall, where, she said, Batteau had tried to fix a broken pipe before giving up. She was terrified rats and opossums might crawl into the home through the hole. Sublette and her relatives have begun spending as much time as possible sitting on a handful of metal folding chairs outside the home, where they have access to fresh air. “We stay outside all day and we stay out until we have to go inside at night,” she said, noting that hot weather and hurricane season are on the way. “Inside, I start coughing and sneezing and have trouble with my skin, and now I’m on allergy medicine just so I can survive inside my bedroom.”

Around the neighborhood, residents shared similar stories. One man with a newborn and three other children, Austin Stevens, said he’d blown through his savings paying for bottled water to drink and wash his baby’s bottle with. “Who wants to give a baby a dirty bottle to drink from?” Another man, Freddie J. Alexander, a 47-year-old father of two, who lives with his sister, her children, and an elderly aunt, had resorted to praying that the city will step in. “When a landlord puts his tenants in an environment where they’re forced to bathe with bottled water, that is what you call a hostile environment,” he said.

For many of the residents in Batteau’s homes, this was not the first time living in Houston that they’d gone weeks without power and water. Sublette had lost almost everything in Harvey’s floodwaters in 2017. Middleton survived for several weeks without power during Hurricane Ike in 2008. Despite that painful history, this disaster felt different to both of them. “It’s like we don’t matter,” Middleton said. “Everyone else is living their lives again and it feels like the city has forgotten about us.”