Eleven asylum seekers detained by the Immigration and Customs Enforcement El Paso field office have gone on hunger strikes to protest their lengthy detention and what they view as inhumane treatment. Several who have been on a hunger strike for more than a month are being force-fed by ICE.  The detainees are using a form of political protest with a long and sometimes deadly history.

“The men we spoke to expressed interest in having a bond hearing and being released on bond. They’re able to pay for bond, it sounds like, and they want to be released from detention,” said Margaret  Brown Vega, a volunteer with Advocate Visitors with Immigrants in Detention, a group that has visited four hunger strikers in ICE’s El Paso Processing Center. She said some of the men had been detained as long as 18 months. “It’s amazing to me that ICE does detain people in these situations when there really is no reason to detain them at all. They should be released. The fact that they have to go to these lengths to be released, to say it’s unfortunate is an understatement.”

ICE officials said in a statement that as of Wednesday night, “eleven individuals in the custody of U.S. Immigration and Customs Enforcement (ICE) in the El Paso, Texas, area of responsibility have declared a self-imposed hunger strike and refused to eat. Nine of the 11 detainees missed their ninth consecutive meal, triggering hunger strike protocols, in late December and early January. Two other detainees officially began a hunger strike Jan. 30. Of these eleven, six are currently being hydrated and fed non-consensually under court orders.” Four other hunger strikers have been reported at ICE facilities in Miami, Phoenix, San Diego and San Francisco.

Representative Veronica Escobar, D-El Paso, tweeted on Thursday that she had visited the ICE detention facility and met with the six asylum seekers being force-fed. “This unacceptable. I’m closely monitoring this situation & as a new member of the @HouseJudiciary, vow to implement policies that provide increased oversight and accountability to ensure detainees are treated with dignity and respect. El Paso and our country are better than this,” Escobar said in her tweet.  Escobar’s husband, Michael Pleters, is an immigration judge based at ICE’s El Paso Processing Center.

This unacceptable. I’m closely monitoring this situation & as a new member of the @HouseJudiciary, vow to implement policies that provide increased oversight and accountability to ensure detainees are treated with dignity and respect. El Paso and our country are better than this.

The discrepancy in numbers between the AP report and the ICE statement is likely due to some detainees not yet reaching the threshold of what the government considers a hunger strike. Federal law defines a hunger strike as when an inmate or detainee refuses food for 72 consecutive hours. The law allows a physician to order feeding without the inmate’s consent when “a medical necessity for immediate treatment of a life or health threatening situation exists.” ICE said a federal judge ordered the non-consensual feedings. Two of the El Paso hunger strikers stopped eating in late December.

“We had kind of heard reports that there were some men from India that were on hunger strike, but we understand that it was pretty short-lived and that they were transferred to El Paso Processing Center sometime in November,” she said. “In probably the beginning of January, we started to hear reports from India that were on hunger strike at the El Paso processing center.”

Brown Vega said they initially knew little about the hunger strikers. “Eventually an individual who was detained inside El Paso who I think was concerned enough about these individuals got together their names and (alien) numbers and mailed out the information to our organization. So that’s how we became aware of their names and that was just about a week ago.” She said the list had the names of 10 men, all Sikhs, a religious minority in India. Sikhs have long been persecuted in India, including a 1984 government assault at a sacred temple that killed thousands of civilians. The number of Sikhs seeking asylum in the United States has increased in recent years, with many claiming persecution from the Bharatiya Janata Party, a Hindu nationalist party that now rules India.

Brown Vega and two other AVID volunteers visited four of the hunger strikers last week at the El Paso Processing Center, the main ICE detention facility in the region. Two were being fed by a gastric tube through their nose and two others were being fed by intravenous devices, she said. All four “were very weak, walking very slow, not a lot of energy, but they all seem committed to continuing regardless with their hunger strike,” she said.

The hunger strike is a centuries-old form of political protest that rose to prominence as a prison-reform tool in the 20th century.  Denis O’Hearn, the dean of liberal arts at the University of Texas at El Paso, is one of the world’s leading scholars on hunger strikes in prison reform efforts. He has befriended numerous inmates who staged hunger strikes to protest solitary confinement and other harsh prison conditions.

“They got to a point where they essentially felt that they had nothing to lose. And they tell me that they were ready to die because going on hunger strike and dying in an honorable way and a human way was preferable to continue to live without any hope,” said O’Hearn, whose 2006 book, “Nothing But an Unfinished Song: The Life and Times of Bobby Sands,” chronicled the Irish Republican Army hunger strikes of the 1980s, in which ten IRA members starved themselves to death to protest their treatment in British prisons. He said hunger strikes that lead to reforms in incarceration practices have a common element that might not be present in the ongoing ICE hunger strikes. “The most important thing is that the activity of the hunger strike has to be coordinated with outside supporters,” O’Hearn said.

The hunger strikes are the latest effort aimed at curbing lengthening stays by asylum seekers in ICE detention facilities. A federal judge in Washington, D.C., last year ruled that ICE wasn’t following its own guidelines when deciding whether to grant humanitarian parole to asylum seekers detained at field offices in El Paso, Los Angeles, Detroit, Philadelphia and Newark, New Jersey. District Judge James Boasberg’s ruling came in a class-action lawsuit brought by the American Civil Liberties Union that alleged that parole was granted in more than 90 percent of cases before Donald Trump became president and dropped to near zero after that, even though the policy guidelines didn’t change. Boasberg issued a preliminary injunction in July ordering ICE to follow its long-established procedures for deciding whether to grant parole.

People granted parole generally have family member sponsors who agree to make sure the asylum seeker appears for all immigration court cases. In a court filing in September, lawyers for ICE said that the number of parole requests granted had risen to 25 percent at the five field offices covered by the lawsuit. In October, ACLU lawyers alleged in a court filing that ICE was not complying with the judge’s order to follow its own parole guidelines. “The unexplained dramatic decline in parole-grant rates is evidence of contempt—not compliance,” they wrote. The lawsuit was delayed for several weeks by the partial government shutdown but is scheduled to resume next week. 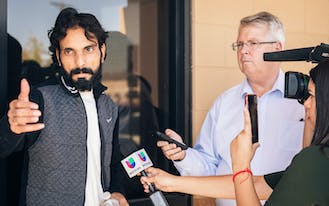