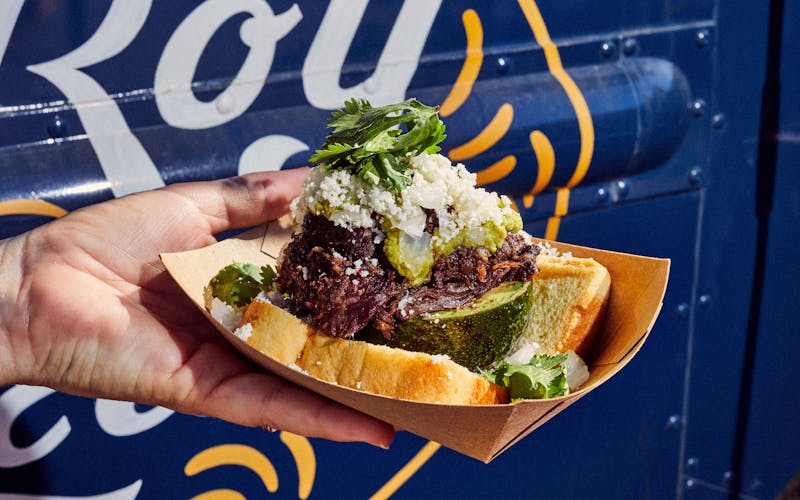 The barbacado at LeRoy and Lewis Barbecue in Austin on September 25, 2021.
Photograph by Mackenzie Smith Kelley

A pretty, tree-shaded gravel courtyard that’s home to a coffee shop filled with Austinites on laptops is the improbable location of a food truck serving up some of the best ’cue in the state. The joint’s ethos is aptly summed up in its slogan: “New School BBQ, Old School Service.” At LeRoy and Lewis, the new-school approach means Evan LeRoy eschews pork ribs (though on Saturdays he does offer “bacon ribs”—massive pork ribs with the belly still attached) and turkey (except around Thanksgiving) and serves brisket only on Saturdays and Sundays. (Said brisket is Akaushi, by the way, and a good reason for a weekend visit.) The regular offerings are excellent, though, two of the best being glistening, succulent smoked barbacoa and luxurious sliced beef cheeks. There’s also pulled whole hog and salty whole hog sausage with a handmade, country look. Also on tap: unusual sides such as sassy kimchi, vinegary braised cabbage and sausage, and terrific pork hash (a.k.a. rice with a meaty gravy). If you don’t have room after all that, know that the cheddar cheesecake with a dab of apple butter is worth a return visit. Serious backyard cooks can sign up online for a weekend at “New School BBQ University” ($1,500, though there’s also a more affordable option of online videos), where they’ll learn techniques such as the foil-boat wrap method, which produces a magnificently crunchy crust on the brisket. Many of the classes take place at Cosmic Coffee + Beer Garden, where the truck has been parked since it opened, four years ago.

Pro-tip: Spend $14 on the L&L Burger, which is made with ground Akaushi brisket scraps.