When Earl Campbell was playing for the University of Texas Longhorns in the mid-seventies, the future Heisman Trophy–winning running back wasn’t outspoken on the issue of race—he let his legs do the talking. But in the new biography Earl Campbell: Yards After Contact (UT Press), Austin American-Statesman staffer Asher Price tells of the important role the “Tyler Rose” played in normalizing race relations at UT. Here are five particularly illuminating moments from the book.

After Marion Ford, one of the first black students admitted to UT, told a reporter that he wanted to play football his freshman year, the school rescinded admissions for all black enrollees.

In 1954, Ford’s statement prompted regents to require black students to take their freshman course load at black colleges, delaying their admission and making it difficult for them to join Longhorn teams were they to transfer back to UT their sophomore year.

Many UT students were apparently more forward-thinking than the regents. In 1954, Washington State Cougars running back Duke Washington became the first African American to play at Texas Memorial Stadium. When he scored a touchdown, the Texas student section stood and applauded.

A month before the game, Longhorn athletic director Dana X. Bible asked Washington State to leave Washington at home for the game. Bible was told that if the running back couldn’t play, none of the Cougars would.

When Campbell met with Royal during a recruiting visit, he told the coach, “I understand you don’t like black people.”

“No, Earl, that’s wrong,” Royal replied. Royal didn’t want to respond to previous accusations that he was racist—one news story had claimed that he had questioned the intellect of black coaches—but he told Campbell he would answer whatever questions Campbell had about his personal beliefs.

Before his sophomore year, Campbell said, “You might hear things about white and black people down here, but I don’t see it on this campus. The players play football like we’re all one color, and we try to reach out to each other afterwards. I’m the kind of guy who says, ‘Come on, take a ride with me,’ no matter who it is.”

This article originally appeared in the September 2019 issue of Texas Monthly with the headline “Longhorn Confidential.” Subscribe today. 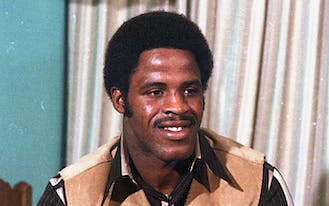