This story is the second in a three-part series.

Last week, I started investigating how one fourth-grade Texas history textbook, Pearson’s 2016 edition of We Are Texas, presents the origin story of our state. Having taken fourth-grade Texas history myself, I suspected that our state-sanctioned literature was not presenting the complete story. More specifically, I wondered if kids were learning that the institution of slavery was but an unfortunate phenomenon that existed at the same time as Texas’s settlement, revolution, and nationhood, rather than a driving force in all of those events. The version of Texas history that I learned in school was extremely anglicized, and as a lover of both history and the Lone Star State, it was disappointing to learn the truth as an adult.

So I looked at a textbook, consulted historians, and discovered that yes, we’re still not teaching children the full story. Last week, we looked at what We Are Texas said about the period of Anglo exploration and settlement. This week, we move on to the next era of Texas history that has been heavily mythologized: the revolution, and the role that slavery played in Texas’s decision to break free of Mexican control. 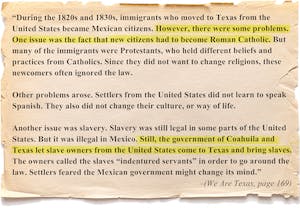 This section has, as journalists say, egregiously buried the lede of the story. Slavery was a much more pressing issue to Texian settlers than was religious freedom or the language barrier. Though only a quarter of the original three hundred settling families brought enslaved persons with them, the Texas economy was incredibly dependent on cotton, and cotton was only really profitable when picked by the enslaved. In 1829, when Vicente Guerrero, then president of the Republic of Mexico, issued a decree that all enslaved people were henceforth emancipated, Anglo settlers were aghast. “We are ruined forever should this measure be adopted,” wrote John Durst, a prominent landowner and politician. Stephen F. Austin replied, “I am the owner of one slave only, an old decrepit woman, not worth much, but in this matter I should feel that my constitutional rights as a Mexican were just as much infringed, as they would be if I had a thousand.”

Texians developed a scheme with which new settlers could evade Mexico’s ban on slavery. According to historical records, before leaving the United States and crossing into Mexican Texas, slave owners would meet with a notary public and draft a document in which slaves were given a specific value. The contract stipulated that though they would gain their freedom when they stepped on Texas soil, they would enter into a period of internment, in which they would work to pay off the debt of their value that they now owed to their previous master. Any costs for clothing or food or housing would be deducted from their “wages,” which were around $20 a year. Any sum not paid off by the time they died would be assumed by their children. Any of the former slaves’ children who were born after their parents passed into Texas would begin paying off their debts when they reached adulthood, presumably being considered property of the master until that point. Cheap labor from enslaved Black people was so central to the success of the early Texian colonies that settlers worked very hard to maintain it.

The Republic of Texas, After Winning Independence From Mexico 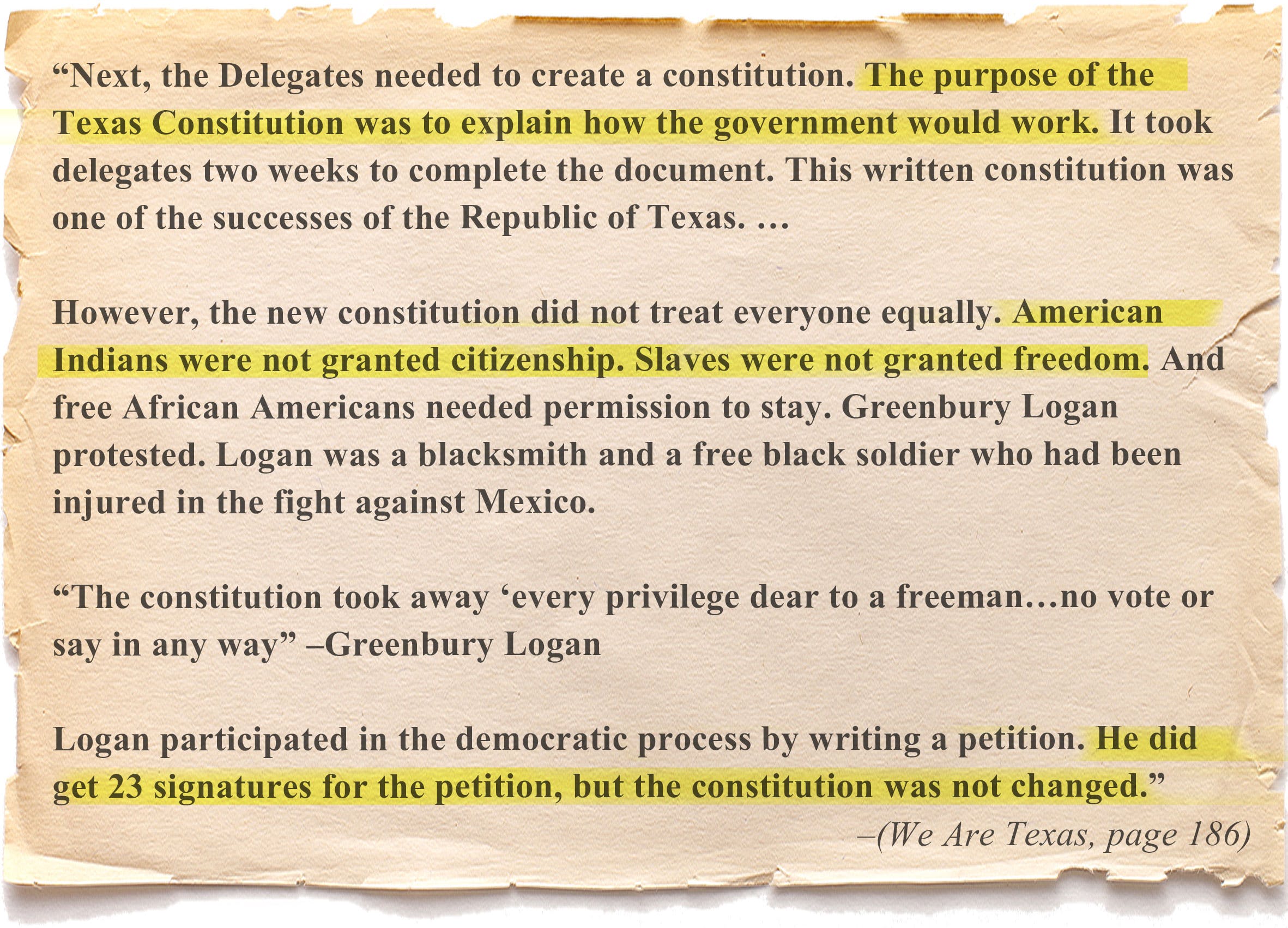 The 1836 Texas constitution was modeled after the U.S. Constitution, but it was also, according to University of North Texas historian Andrew Torget, very much a precursor for what the Confederate states would try to do when they seceded from the Union in 1861. “Ninety-five percent of the entire Republic of Texas economy was cotton, so what they’re building is a cotton nation,” Torget says. To do that, they “believed they needed slavery to be legal and protected, because that’s what makes it profitable.” As the Confederacy would do later, the Republic drafted a constitution that “protected slavery in no uncertain terms, much beyond what the U.S. Constitution did,” says Torget. The Texas constitution of 1836 stripped the Republic’s congress of the ability to pass any legislation affecting the slave trade, let alone emancipating anybody. No slave owner in the Republic of Texas could free his slaves without the consent of the Republic’s congress. Any free Black person living in Texas could continue living there only with the approval of the congress. The prospect of any free Black people in Texas was considered a threat to the institution of slavery, because it could embolden slaves to run away.