One of my earliest memories of music is Roger Miller, depicted as a lute-toting rooster, whistling over the credits to Disney’s Robin Hood. The tune still gets stuck in my head on a near daily basis (probably to the chagrin of my wife and colleagues). I rediscovered Miller as a teenager, at a time when songs like “Chug-a-Lug” served as the perfect soundtrack for drinking Coors on a Friday night in the West Texas oil patch. And later, as a college kid trying to write my own songs, I developed a deep appreciation for his brilliant but understated wordplay, a talent he used whether he was singing about “a man of means by no means” in “King of the Road” or offering sage advice in “You Can’t Roller-Skate in a Buffalo Herd.”

I wasn’t alone in my admiration of Miller’s memorable (and sometimes downright weird) penmanship. From thatched pubs in Ireland to grimy dive bars near Joshua Tree, when someone launches into a Roger Miller ballad, you can bet that by the last chorus, nearly everyone will be singing along. In his nearly four-decades-long career, he was a touchstone for generations of listeners through a range of roles: as a gifted fiddler, a firecracker TV personality, a Broadway composer, and, of course, his turn as a feathered minstrel. Twenty-five years after he died of cancer at the age of 56, Miller’s legacy endures. Now a forthcoming tribute album presents an opportunity for a new audience to discover Miller and gives his longtime fans another chance to sing—or whistle—along.

King of the Road: A Tribute to Roger Miller, which will be released August 31, was spearheaded by Dean Miller, Roger’s son. “When we first started this project two years ago, we had ten major names sign up in the first week or two,” Dean said. “We realized pretty quickly that this was going to be bigger than we thought. There were a lot of different artists from different backgrounds who really loved my dad.”

That wide-ranging influence shows in the eclectic mix of artists represented on the track list. There’s a wealth of country music royalty—Loretta Lynn, Alison Krauss, Emmylou Harris, and Dolly Parton—and a handful of rockers sprinkled throughout the two-disc set, including Cake, Toad the Wet Sprocket, and Ringo Starr. The Blind Boys of Alabama take on “The Crossing,” while Huey Lewis pitches in on “Chug-a-Lug.” On the hilarious “Guv’ment,” actor John Goodman reprises his role from Big River, the musical that earned Miller a Tony Award for his original score. Merle Haggard, in one of his final recordings, appears alongside his old friends, Willie Nelson and Kris Kristofferson. Other Texas artists on the album include Robert Earl Keen, Lyle Lovett, Asleep at the Wheel, Rodney Crowell, and Radney Foster. And to showcase Miller’s ability to conjure quirky, unforgettable characters, there’s Kacey Musgraves.

When Dean and his production partner approached the East Texas native about contributing to the album, Musgraves agreed and picked “Kansas City Star,” one of Miller’s classic vignettes about a small-time player who might be a little big for their britches. The song assumes the voice of a cowboy “kiddy show” actor who turns down a higher-paying gig in Omaha to stay put in Kansas City, where he’s perfectly content being the “number one attraction at every supermarket parkin’ lot.” Musgraves, like Miller, is known for her ability to meld carefully crafted lyrics with genuine comedic wit, and performs the song with the same winking swagger of the original. Musgraves gives Miller a run for his money on the yodeling, and delivers the lines with her trademark rhinestone charm. “I’m the Queen of Kansas City,” she sings, and you believe her.

King Of The Road: A Tribute to Roger Miller Track List:

King of the Road: A Tribute to Roger Miller comes out August 31 via BMG. 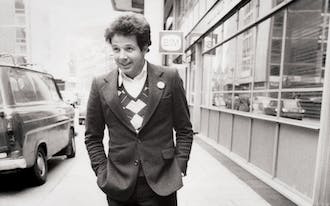