The cinematic tradition of Texas is rich. It includes classics like Giant and The Alamo, and cult favorites like The Texas Chainsaw Massacre and Paris, Texas. Our state has been the setting for epics like Lonesome Dove and for idiosyncratic, personal stories like Rushmore. Even movies that have nothing to do with Texas were shot here—the wildly different post-apocalyptic terrains of both Robocop and Logan’s Run include Texas locations, and the anodyne Anywhere, USA depicted in Office Space is actually suburban Austin. That film history offers endless excuses to traverse the state, and cinephiles who want to spend their summer sweating outdoors rather than enjoying an air-conditioned movie theater could enjoy an epic road trip, from the West Texas of Fandango to Terms of Endearment‘s Houston, from Selena‘s Corpus Christi to The Last Picture Show‘s Archer City.

The Texas Film Commission thinks that’s a great idea. In fact, as part of its Texas Film Trails project, the state agency created a map to help film fanatics visit the Texas sites made famous in Hollywood classics. The map focuses on sites that appeared in movies, dating as far back as 1957’s Giant, but includes TV sets as well, with sites as recent as the Alamo Freeze from Friday Night Lights (which concluded its run in 2011).

The map features a variety of different locations, some of which were used in multiple films. San Antonio’s River Walk, for example, was where Steve McQueen met Ben Johnson in The Getaway, but it’s also where Selena and Chris Perez celebrated their marriage in Selena, and where the beauty pageant takes place in Miss Congeniality. Others are more specific, like Austin’s Baker Street Pub, which served as two different fictional casual dining chains (“Chotskie’s” and “Flinger’s”) in Office Space back when it was known as the Alligator Grill. The entire town of Smithville was a shooting location for the Sandra Bullock and Harry Connick Jr. vehicle Hope Floats, while the Dowell House Bed & Breakfast in McKinney had its one moment of cinematic glory when Benji‘s titular pup hid there, back when the location was in a state of disrepair. Some locations have changed names, others have changed purpose entirely—but if you walk into the space and squint, you’ll probably find something familiar.

There are locations for both casual fans who’ve seen a film once and obsessives who know every line of a scene by heart. Only a particularly passionate Rushmore enthusiast would make a trip to Houston just to visit the barber shop that Max’s dad owns; North Texas’ iconic Southfork Ranch was the primary setting for thirteen seasons of Dallas. But even the smallest movie footnotes make for worthy trivia on a long drive. Taking a special trip out to Fort Stockton to visit the Executive Inn featured in Paris, Texas might be more than most people have in them, but if you’re a fan of mid-1980s German cinema who happens to be passing through on I-10, why not look out the window to spot a location from Wim Wenders’s masterpiece of Americana?

If you’re affronted that the Texas Classics Film Trail doesn’t feature enough zombies, the Film Commission has another option for you. This summer, the agency also launched a map of Central Texas shooting locations for season four of AMC’s Fear the Walking Dead, featuring locations from Bartlett to La Grange to Dale, plus high-profile spots in Austin, Round Rock, and Volente Beach. Fans of AMC’s second-most popular zombie show can hit all of those spots on a single day trip, if they want to go hunting for walkers and supplies in pre-apocalyptic Texas.

Those whose cinematic affinities trend toward the indie have options, too. The Richard Linklater film trail spans the entire state, from Big Bend National Park (where the final shots of Boyhood take place) to the wee little Texas Country Music Hall of Fame in Carthage, which appears in Bernie. Along the way, you can visit the Caldwell County Jail (which The Newton Boys break out of in Linklater’s Western), Austin’s Top Notch drive-in (famous from Dazed and Confused), and more.

Whether or not these maps inspire a summer road trip, they illustrate fascinating ties between the filming sites and offer little-known pieces of movie history. Some locations, like the Texas Prison Museum and Texas State Penitentiary, appear in multiple movies over multiple decades; one coffee shop in Plainview was immortalized in a previous incarnation as the place where Steve Martin met Lolita Davidovich in Leap of Faith; there’s an unheralded history to an otherwise unremarkable Dairy Queen in Austin. Hooray for Hollywood—and for Texas. 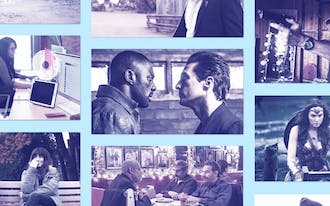