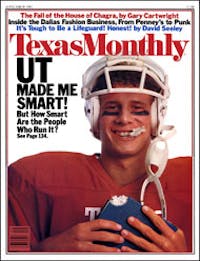 If ever a plant held a grip on a place and the minds of its inhabitants it is mesquite. Half of Texas has lots of mesquite growing on it, and about the only place it won’t grow is in East Texas. Mesquite is a delicate, almost oriental-looking tree, never very tall, with a slender trunk and branches, a filigreed canopy of leaves, and cloudlike wisps of perfumy blossoms. But looks are deceiving—mesquite has an indomitable life urge. It sends down a forty-foot taproot as well as lateral roots that reach out fifteen to fifty feet around the base of the trunk. This system allows it to siphon water away from grasses and plants, helping it to survive in droughts when everything else withers. Mesquite has great stratagems for multiplying, too: It produces slender, gnarled pods, which contain many seeds, each snuggling in a tough coat. These pods taste good to livestock and wildlife, which eat them, digest the protective seed coats, and conveniently spread the seeds far and wide in the perfect medium for germination—their dung. And if conditions are bad, the seeds can lie dormant in their seed coats for as long as forty years. If the trees themselves are disturbed or plowed down, they sprout back in greater profusion.

It is a rule of terrain that folks become as rugged as the landscape, and when Texas rancher met mesquite he got tough. He developed a pragmatic but rather ruthless attitude toward the tree, which helps explain his less than benevolent feeling about nature in general. It’s hard to love what’s in the way, and when you’re trying to raise cattle, just about everything in the grass is in the way. Keep in mind that the rancher heaped a good bit of misery upon himself, though. Before the onslaught of the cattle herds in Texas, mesquite was less ubiquitous than it is today. More cows seemed to bring on not only more but denser stands of mesquite. Something else was at work besides the cattle’s merely scattering the seeds. This is how most botanists explain the correlation: As livestock munch on mesquite beans, they are apt to trample on some trees, especially younger ones, which triggers a survival response from the mesquite. On the underground portion of the main trunk are dormant buds that literally get jolted into life if the plant is shaken up. The disruption makes those buds send up more stems—one mesquite becomes a bigger, thicker mesquite. This proliferation would be fine if the beans alone were enough for the cows to eat, but they aren’t. The bean pods are not as nourishing as grass, and besides, they grow on trees only in the summer. Eating mesquite leaves is out of the question, since spaced along the branches are lethal two-inch thorns.

As more and more mesquite sprang up, the rancher did not stand idly by. He began by hand-grubbing—rooting out mesquite trees one by one—and then tried poisoning them with sodium arsenite or kerosene. Methods have gotten much more sophisticated, but the basic attack still requires chemicals and heavy machinery. Often the land has to be sown with grass seed. And the mesquite always comes back. The war peaked in 1940, 1944, and 1966 (more than two million acres of brush were cleared each of those years). If anything, mesquite has the edge now because of the economy: Fuel and herbicide prices are too high, beef prices are too low. It couldn’t be called peace; at best, it’s a sort of truce.

Mesquite has caused any number of people grief, but as long as it is around—and chances are it will be forever—it can remind us of two important things: It is tough to be a Texan, but there are compensations. Even ranchers acknowledge the finer points of mesquite. It is lovely to look at; it smells wonderful in the spring; it makes fine fence posts; it provides shade and food not only for cows but also for deer (and deer attract hunters willing to pay handsome lease fees); the sweet smoke from a mesquite fire has no equal for grilling steaks; its blossoms make superior honey; and, perhaps most important to a Texan, it does not grow so high as to obscure the sky.