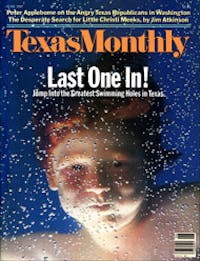 Texas’ motto is “Friendship,” and Texas’ highways cover more miles than any other state’s, and the intersection of these two facts is the hi sign, the laconic one-finger wave shared by rural travelers. In the days of the open range, when pioneers saw another wagon of lonely wayfarers on the trackless plains, they could always rein up and chat awhile. But we modern Texans travel 55 miles an hour—at the very least—and can barely slow down for a pit stop. Thus the hi sign was born. By using it, we convey our goodwill to our fellow drivers and reaffirm our reliance on each other during long trips across isolated country. The hi sign is strictly a highway courtesy, an automotive gesture developed for the modern age. A person on horse or on foot raises his whole hand, but the demands of travel on wheels dictate a specialized wave.

Body language for “howdy,” the hi sign is the simplest of waves, merely the raising of the forefinger of the driving hand, which does not budge from its draped position across the top of the steering wheel, the attitude struck by most long-distance or travel-wise drivers. (The other arm is out the window or on the armrest, depending on the weather and your driving speed.) Giving the hi sign also provides an opportunity to stretch a cramped hand, thus accomplishing two purposes at once. It wastes no energy; it is a model of efficiency, like all nonessential movements by country folks who must save their labor for the land. But be alert. The hi sign is brief, often lasting only a second.

The hi sign does not exist in or near cities, where drivers are more likely to flash a neighboring finger. Nor is it likely to appear on those extensions of urban haste and aloofness, the freeways, where traffic is too heavy and where drivers are doubly distant—first, because their citified distrust and fear discourage them from looking at occupants of other cars and, second, because the oncoming cars are too far away. (When urban drivers do acknowledge their fellows, their gestures are based less on friendliness than on status. Passing BMW owners, for example, might flash their lights in reciprocal admiration for each other’s taste in cars, while a particular bumper sticker or window decal might elicit a honk or hook ’em.) You will find the hi sign only on safer, emptier turf, such as two-lane blacktops and lesser byways in the country or, perhaps, in very small towns, such as those that don’t even have a traffic signal. The more deserted the road, the more likely it is that you’ll see the hi sign, which tends to disappear if there are more than two cars—the giver and the receiver—on the road.

Women, unless they are truckers, are unlikely to give the hi sign. The best bets are men, especially middle-aged and elderly, people who drive American-made vehicles or anything with mud flaps, and those in cowboy hats, who by and large still cling to the friendly tenets of Western hospitality. If, on a deserted, narrow road, you pass a Stetsoned grandpa in a Ford pickup, you can anticipate that he will give you the hi sign. So be ready: The simultaneous mutual exchange of hi signs will put a smile on your face that will last till the next tailgater.

There are several less common varieties of the hi sign. One is the Uncle Sam patriotic point, in which the finger is extended straight out instead of up, making it even more low-key and difficult to see. The four-finger waggle permits the driver to flex his whole hand without shifting its position on the wheel. Sometimes a driver will salute out the window with the hand that grips the top of his truck, or from the far side of the car when the right arm is stretched across the back of the passenger seat. It takes a sharp eye to spot these variants before the greeter has sped past, but in certain swaths of Texas another vehicle, like anything interesting, is unusual enough that when it comes along it captures your attention. You don’t have to wait to be given the hi sign, though. When you’re traversing an isolated part of the state and a fellow sojourner appears on the horizon, go ahead—lift a finger to cheer him on his way.