Rylan Wood was born into an age of mediocrity for the Dallas Cowboys. In the first three seasons the team played after the seven-year-old was born, they went 8-8. Since then, they’ve won exactly one playoff game, posted a dismal 4-12 season in 2015, and have currently staked out a 3-5 record. These are the only Cowboys Rylan has known—ones coached by Jason Garrett.

Garrett, however, was not main subject of the youngster’s ire when he penned a letter to complain about the current state of the team. Rather—using the clear-eyed insight of a child—Rylan addressed his correspondence to the person most Cowboys fans tend to blame when things go poorly: Jerry Jones.

Rylan’s mother, Kayla Jimenez, shared the letter on Facebook. Filled with justified invective (and fueled by a fresh loss to the previously hapless Tennessee Titans, which Rylan missed because of his 8:30 p.m. bedtime), the burning missive to the billionaire owner of the beloved franchise quickly caught the internet’s collective eye.

Rylan explains that he is upset with Jones because of how his decisions have impacted his mother, who fruitlessly yells at the TV before turning it off completely. Rylan misses Dez Bryant. Rylan puts “Coach Garrett” in scare quotes. Rylan is a true fan who owns a lot of Cowboys gear. Rylan would not be impressed, Mr. Jones, if you try to assuage his feelings by introducing him to Zeke, Taco Charlton, or Jason Witten—he’s already met them. Rylan believes that the friggin’ cheerleaders might put up better results against the Eagles this week than the men who’ve trained their whole lives to wear a star on their helmet on Sundays. But most importantly, Rylan does not want to hurt Jerry Jones’s feelings.

My name is Rylan Wood. I am a 7 year old 2nd grade student in Mansfield, Texas. My family has been Dallas Cowboys fans since the team was started. I have a lot of Cowboy gear and I have met Zeke, Taco, Jason Witten, and two other players who play on other teams.

You have made my mom very mad because WE SUCK! Every game day she is yelling at the tv and turns off the game. We are wanting to believe in the boys but its hard. I hope “Coach Garrett” is clapping if this letter gets to you. See what happens when Dez X is gone??  The cheerleaders are better than the team this year. I do not want to hurt your feelings.

The letter is a masterpiece of the poison-pen in the tradition of Hunter Thompson or H.L. Mencken. That pure glee you see in the eye of young Rylan as he holds his creation? It’s because he knows it will sting when it is received, and he knows that the reason it will sting is because it’s all true. He means the things he says to Jerry Jones, but he doesn’t mean them to hurt his feelings. He just needs him to know: the Cowboys are failing Rylan, they are failing his mother, and—if they have failed this particular family in Mansfield, they are presumably failing countless other fans all over the country.

At press time, Jerry Jones had not responded to a request for comment about Rylan’s complaint. 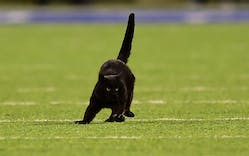