Seven-layer dip is the most popular Super Bowl dish in Texas, according to a press release we received on Monday—just six days before the big game, which starts at 5:30 p.m. CT on Sunday, February 2, on Fox. The report included a map of every state’s favorite Super Bowl snack, which they compiled by analyzing Google Trends that looked at what people across the United States were searching for.

This year, Texas got seven-layer dip. It’s certainly a Texas-y dish, even if these metrics are inherently subjective and unscientific. Last year, a similar map gave us spinach dip, which, sure. Over Thanksgiving 2018, one map making the rounds even told us that our favorite pie, right here in Texas, is key lime—an absurdity that’s beneath our dignity to even begin to argue with. And it’s worth noting that Idaho, Rhode Island, Illinois, both Carolinas, and Massachusetts, states with as widely disparate cultural identities as the U.S. is capable of, also apparently searched for “seven-layer dip” along with “Super Bowl” online.

Rather than dispute the accuracy or methodology of this claim—which was put out into the world by the website www.bid-on-equipment.com—we’ve accepted this cumbersome reality, along with the fact that we, like many news outlets, should probably do the requisite “what time is the Super Bowl?” post. Here, then, is a recipe for seven-layer dip, which Google brought you here to find. 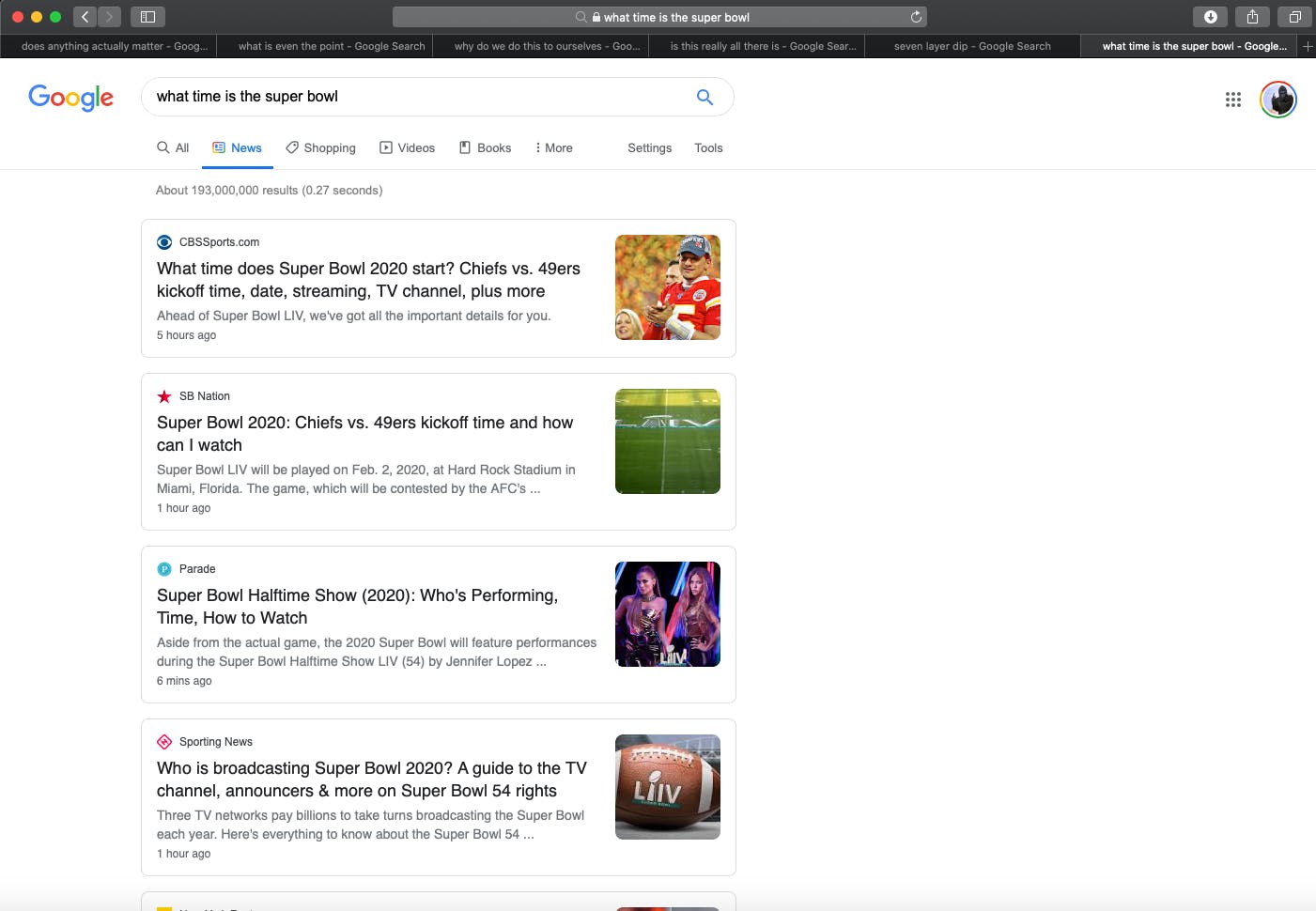 Start your seven-layer dip with a layer of refried beans. What brand of beans? Your call, but we are going to embed a tweet from a stunt that Bush’s Beans did this week. They made a 70 layer dip to get into the Guinness Book of World Records for the biggest dip ever, at 540 pounds. Stuff like that is good for driving the relevance of the post, and if you click the embedded tweet below, Google will think that more people are engaging with this post—which is good for us!

The first published seven-layer dip recipe appeared in a 1981 issue of Family Circle magazine, according to Wikipedia. That recipe, the entry goes on to say, called guacamole “mashed seasoned avocados,” likely in order to avoid introducing concepts that were too foreign-sounding for the magazine’s audience back in eighties. These days, you can get guacamole on your burger at Jack in the Box.

That same Wikipedia entry reveals that the pico layer was initially referred to as “chopped green onions, tomatoes, and onions.” It’s ridiculous that even the basic staples of Mexican food would apparently have to be described as their component parts, lest it frighten or confuse Family Circle readers. But I just spent twenty minutes looking for some sort of citation on this, and came up with zilch—there’s no online catalogue of Family Circle, and Google Books doesn’t have old issues scanned for people to buy. It’s certainly plausible that seven-layer dip was introduced to the wider world via a questionable recipe published in a major home and lifestyle magazine in 1981, but if you’re looking for confirmation of that, well, you won’t find it here.

But I’ve got to get through this thing, because the Internet is an all-consuming content maw that demands highly specialized, discrete layers of expertise that no one person could reasonably be expected to possess all at once. So go ahead and decide for yourself how credible you find a citation-light Wikipedia entry as a source.

I mean, it can be whatever kind of cheese you want: Cheddar, queso, jack. Feta! Go nuts here. It’s your dip, it’ll all coalesce into an edible slop. I’m kind of distracted at the moment, because I was unsatisfied with there being no sourcing on this 1981 Family Circle thing, and I found an excerpt—also unconfirmed, but with names and dates—from the 1997 book The American Century Cookbook: The Most Popular Recipes of the 20th Century by Jean Anderson. It cites former Fort Worth Star-Telegram food editor Jo Anne Vachule as the source of the recipe, who included it in a column that ran in Family Circle on February 3, 1981, compiling the favorite recipes from local food editors. “It started becoming very popular in the early ’80s,” the book says. “The recipe was around before then, but it really took off at that time.”

That’s a solid lead. But said issue of Family Circle is for sale on Amazon for $7, with another $7 in shipping—but it won’t be here before the Super Bowl, so what’s the point? Do I really want to spend $14 just to satisfy my own curiosity, since this will have already posted by the time it arrives in the mail?

Yeah, you read that right, peas. Add some peas to your seven-layer dip. In 2015, the New York Times published a guacamole recipe that insisted that peas were the missing ingredient. Everybody on the internet lost their minds.

I never tried it—maybe it’s great. But I just spent a lot of time trying to source something from Wikipedia that I won’t be able to confirm without waiting a week and spending $7 plus shipping, so we’ve got to get this thing back on track. SEO is great, the Super Bowl is airing on Fox at 5:30, but a good old-fashioned hate-click is important, too, so add some peas to your seven-layer dip, trust me, it’s amazing. Every dip made without peas is wrong, and mine is right. Are you outraged? Share this with your friends, so they too can be mad at the peas!

This isn’t what the internet had to become, you know. There was a future for it that was brighter and more interesting, where everyone who wanted to make any money publishing on it wasn’t obligated to Google and Facebook. It’s just not the future we got! That peas thing up there is a dated reference, but most of you will get it, and be like, “huh, that’s a callback,” but that’s fine—we’re nostalgic for the bad internet of five years ago, and even though its inclusion is a transparent ploy for outrage clicks, a little part of you is still like, “Look at this asshole, telling me to put peas in my seven-layer dip.”

It’s exhausting, and while we also have the ability to do work that is interesting and insightful—and I’m lucky, I work at Texas Monthly, I have a lot of freedom here—that doesn’t stop everybody whose work happens on the internet from feeling the creeping dread that the important work is secondary to writing posts like “what time does the Super Bowl start?” and “what’s the most popular Super Bowl food in each state?” On good days, we can be confident that this work does have meaning—but sometimes, you find a map of the most popular Super Bowl food in each state and you think, “Yeah, that would make for some good content.”

And thus the dread! I don’t know how to incorporate that into your seven-layer dip, but it’s 2020 and you are a human being alive as the planet is on fire, so everything you eat already has a certain amount of abject terror baked into every bite. Oh, and don’t forget the sour cream, that’s an important layer. Bon appetit, y’all!

Who puts bees in a seven-layer dip? They’re stinging my mouth! What kind of a party is this? How did they not drown in the guacamole?? 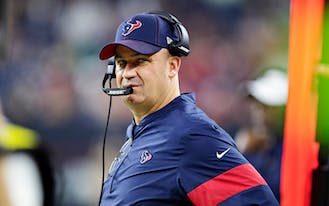 What If the Texans’ Bizarre Offseason Wins Them the Super Bowl?