Not only have the past few days been cold for the people, pets, zoo, and ranch animals out there, but they’ve been bad for the wildlife, too. Specifically, the sea turtles that live on the Gulf Coast have been suffering from hypothermia, which creates a dangerous situation for our big, be-shelled pals: Cold-stunned turtles float near the surface, which puts them at risk of being eaten by predators, or even of getting hit by boats.

In December, the Texas State Aquarium took in more than 100 of the turtles to rehabilitate them—and now, emergency crews from a variety of different organizations are out on the water, rescuing cold-stunned creatures whose lives are in jeopardy. As the Corpus-Christi Caller reports:

Donna Shaver with the National Park Service said that as of 1 p.m. Tuesday, crews have found 41 live, cold-stunned sea turtles in the coastal waters.

“We have been on the lookout for cold-stunned turtles since early December,” she said. “We are continuing to search and rescue these animals so that they may be immediately rehabilitated.”

When temperatures drop in the area, Shaver said, sea turtles that are in the shallow waters become incapacitated and will float to the surface stunned.

The team of organizations working in tandem to save the turtles includes the National Park Service, the U.S. Fish and Wildlife Service, the Ark Wildlife Rescue & Rehabilitation, and—in a savvy move for a company that has PR woes regarding its treatment of marine life—Sea World San Antonio. The rescue ops include groups on boats looking for floating turtles, as well as groups along the shore spotting the ones that have washed up.

The animals that are taken in for rehabilitation are monitored—aquariums look for injuries, weight loss, vitals, and body temperature—and then are re-released into deeper, warmer waters in the Gulf Stream when they’re able to make it on their own. The worst of the cold front is expected to pass by Thursday morning, which means that hopefully the frigid turtles will enjoy the rest of 2018 in better condition.

How to Deal With Below-Freezing Temperatures in Texas 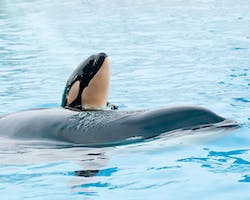