In a state full of outsized personalities, Sid Miller still manages to stand out. He wears a cowboy hat like he was born in it, and his ever-present grin suggests a man who is loving life. Seemingly, the only things that can harsh the guy’s good mood are the existence of Muslims and the indignity of being wished “happy holidays” by someone he encounters during the course of his day.

Christmas, obviously, is the marquee event, and many greetings and interactions with cashiers at retail establishments conclude with a warm “merry Christmas.” But not only is Christmas not universally celebrated—Jewish people, for example, celebrate Hanukkah—but a week after Christmas is New Year’s Day. Additionally, the relatively recent Kwanzaa—a winter celebration intended in part to honor the cultures whose traditions were lost to the slave trade—occurs in the days immediately following Christmas.

To recognize the abundance of holidays celebrated at this festive time of year, Irving Berlin composed the jaunty tune “Happy Holidays” for the 1942 Christmas film Holiday Inn.

In recent years, “happy holidays” as a greeting has taken on a tenor that is less of a seasonally appropriate way to offer a friendly hello or goodbye, and more of a way to challenge the cultural supremacy of Christmas. 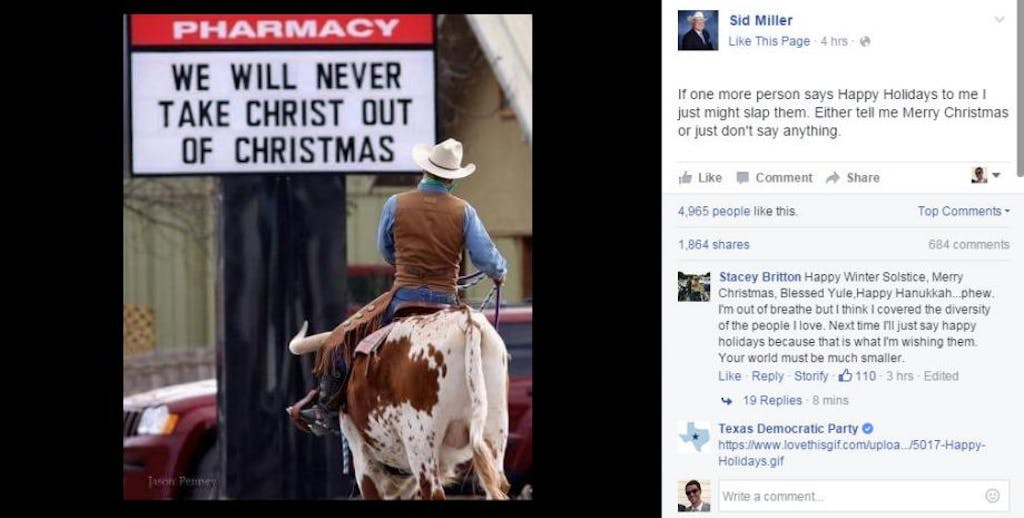 Miller explained on Facebook that if you see him coming down the block, you must say the words “merry Christmas,” remain silent, or find yourself slapped. Yes, failing to properly conclude on sight that Miller opposes the acknowledgement of New Year’s Day, or that the days that our Jewish friends and neighbors spend celebrating the festival of lights are anything other than non-special days unworthy of recognition, could earn one a slap from the statewide office holder.

Culture war nonsense is all silly, of course. It’s polite to accept a greeting like “happy holidays” in the spirit of joy and friendship this time of year, but Miller, who once held a press conference pardoning a cupcake, is generally pleased to engage in silly culture war business whenever possible.

Still, though some of his constituents may roll their eyes at Miller’s antics, one group who probably thinks “joy” and “friendship” when they hear that name are his agency’s employees, who’ve received an unprecedented $413,700 in bonuses in the nine months since Miller took office.

Those bonuses were disbursed to some 144 employees in early September, an average figure of just under $3,000 per person. (Actual bonus amounts ranged from $4,000 to $1,200.) That’s a generous payout to state employees, whose salaries range from the impressive (eleven of those receiving bonuses make more than $75,000 a year) to the mostly adequate (32 of them make under $35,000). Miller has discretion in paying out bonuses, and he’s opted to use it: As the Houston Chronicle notes, his numbers far outsized those of both his predecessors at the Agricultural Commission and his fellow statewide officials:

Miller doled out $413,700 in one-time cash rewards to 144 employees between January and September – the most of any statewide elected official in that time, and more than the total given by Gov. Greg Abbott, Attorney General Ken Paxton and Comptroller Glenn Hegar combined, according to the Houston Chronicle data analysis.

Those numbers are surprising, but we’ll refrain from making any value judgments concerning paying out employees some bonus money—instead, we’ll just note that Miller’s employees should find themselves enjoying a merry Christmas, indeed.