On August 1, the Southern Methodist University student group Young Americans for Freedom posted an open letter to their Facebook page. The letter, addressed to the university’s president, Robert Gerald Turner, criticized SMU for its response to the group’s request to display a 9/11 memorial on Dallas Hall lawn, the same spot where the campus gathered after the attack in 2001. The memorial, a display of 2,977 American flags to represent the lives lost on 9/11, has been constructed on the lawn for the past two years.

This year, however, the memorial is barred from Dallas Hall lawn. The new location, designated for all lawn displays, is Morrison-McGinnis Park, or MoMac Park, which the YAF describes as “far less prominent than the iconic Dallas Hall lawn,” adding that “thousands of students, faculty and local residents pass by [Dallas Hall lawn] every day and serves as the heart of our campus.” But in addition to the location change, the organization particularly had a problem with the language used in the policy, which they received in July as a response to their request. The policy, titled “Memorial Lawn Displays,” read:

YAF criticized that language as an attack on freedom of speech and warned that the university was headed in the direction of “indoctrination, not education” if they continued to limit students’ right to share and express their beliefs. The open letter is signed by the chairman of Young Americans for Freedom, the president of College Republicans, the co-presidents of College Democrats, the president of Mustangs for Life, and the president of Feminist Equality Movement. The idea that a 9/11 memorial could be “triggering, harmful, or harassing” has drawn criticism online and even from Governor Greg Abbott.

In response to the backlash, SMU released a statement explaining that YAF’s “requests for displays have been approved in previous years, and SMU as a community has held 9/11 memorial events every five years since 2001, including a notable event last year in collaboration with area first responders.” The university also apologized for the “inappropriate wording” in the policy sent to the students, explaining that the policy “had not gone through the appropriate approval process.” The updated policy, now titled “Lawn Displays,” reads:

The University respects the right of SMU community members to express their opinions as individuals with varying points of view and interests. The university also respects the right of all members of the academic community to be free from coercion and harassment. Reasonable limitations may be placed on the time, place and manner of such expression activities in order to serve the interest of health and safety, prevent interference in the conduct of University business, and protect against the infringement of the rights of others. Because we seek truth, we encourage the expression of ideas, accept challenges to our assumptions, and treat those whom we question as colleagues sharing a common purpose.

Kent Best, a spokesperson for SMU, said that the wording on triggering or harassing lawn displays was only to explain why certain requests might not be approved, but that the restriction would never have applied to the 9/11 memorial. The policy change was made in the July, Best said, just a few days before YAF’s request was received. “I can assure you 100 percent that their display was going to be approved,” Best said.

What didn’t change between the two versions of the policy was the new location. Best said that there were no specific incidents that led to no longer allowing displays at Dallas Hall lawn, but rather a need to keep that area available for students’ use and other university activities. Referencing a map of SMU’s campus, Best explained that MoMac Park was more centrally located on campus and that though Dallas Hall lawn was bigger, displays had never been allowed to use the entire space on the lawn.

Map of MoMac Park, the larger site where all approved lawn displays, regardless of sponsoring organization or subject, will be located. pic.twitter.com/MqWFgMB5i5

When asked if there were events that would have conflicted with this year’s 9/11 memorial, Best explained that a football game tailgate on September 9 would take place on the lawn. Since YAF might need to put up the flags for the memorial the day before 9/11, tents from the tailgate might not be removed in time, Best said, but he added that the decision to move lawn displays to MoMac Park was made before the were aware of any scheduling conflict. On the YAF’s Facebook page, the group posted a screenshot of a tweet from SMU in 2015, which includes a picture with the flags from their memorial next to tailgating tents.

A sea of red, white & blue @SMU in remembrance of 9/11. Thanks to Young Americans For Freedom for the lovely tribute. pic.twitter.com/JXRYi77vdR

“SMU can’t hide the fact that they celebrated and supported our 9/11 Memorial on Dallas Hall lawn, despite it being surrounded by remnants of tailgating tents from the weekend before,” the photo caption reads. “This isn’t a logistical problem. This is a freedom problem. Our pressure will continue until this policy is changed.”

Although the university has not confirmed it, Daniel Rosa, president of Mustangs for Life, and Matthew Lucci, co-president of College Democrats, believe that the policy change was a response to a Mustangs for Life display. Rosa said that for the past four years, during the spring semester, the organization has displayed a “Memorial for Innocents” to signify “the number of abortions that happen per day in America.” For the past three years, the display has been about 2,000 crosses spread on the lawn. In recent years, there have been counter-protests and displays by pro-choice organizations such as Feminist Equality Movement and Mustangs for Unity (an organization created in response to Mustangs for Life). Rosa says people have sometimes kicked over crosses in his organization’s display, and this year, a student responded to the display by raising money for Planned Parenthood. But the representatives from the groups, who might publicly disagree on many things, both want Dallas Hall lawn available for displays again.

“Of the three displays that occur every single year, the 9/11 display has never been controversial, whereas the other two have,” Lucci said. “And the text of the original policy change hints at that.” Lucci doesn’t believe that SMU had malicious intent toward the 9/11 memorial, but he still considers the restriction of lawn displays to MoMac Park as a limitation. Because the park is mostly surrounded by dorms and receives less foot traffic than Dallas Hall lawn, which he describes as “the academic center” of the university, relegating them to an area where lawn displays are not likely to receive the attention and response they’ve received in the past, Lucci believes the university is “in a way” restricting their freedom of speech.

Best could not confirm any plans to change the lawn display policy, but students are holding out hope. On Monday, student leaders who signed the open letter met with Kenechukwu Mmeje, SMU’s new vice president for student affairs, to discuss the policy changes. Although details of the meeting, which included representatives from SMU’s development and legal departments, were scarce, Lucci seemed hopeful. “Student and administrative leaders are working together on a solution to the problem at hand, the details of which are still under consideration at this time,” he said after the meeting. “I am confident that the administration of Southern Methodist University and the students in attendance will be able to reach an agreement in the near future.” 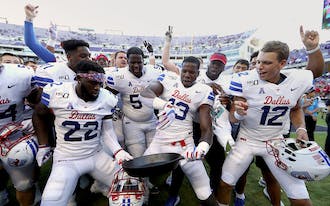 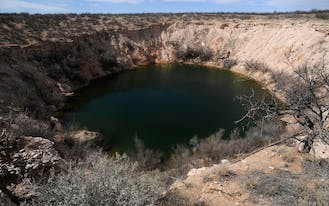 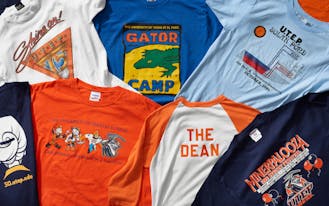