When I first met Charlie Vela, co-director of the SXSW 2017 documentary As I Walk Through The Valley, we were both teenagers. He was a few years younger—I was already out of high school—and he was a member of The December Drive, one of the more promising bands in the Rio Grande Valley’s early-2000s scene. It was easy enough to know everybody else, anyway. After all, the Valley—a four-hour drive from San Antonio—is essentially a world unto itself, so keeping track of who was who wasn’t much of a challenge.

What was a challenge was knowing what came before. The Valley, at that point, wasn’t great at establishing institutional memory—at the local paper, reporters often come in from out of state—many of them only lasting a few years—and attempts to start alternative media rarely went far. Alt-weeklies would pop up, last a few dozen issues, then fold. News channels would erase their archives. When it came to tracking the history of music in the Valley, it was especially tough. Everybody knew Freddie Fender (he’s on the water tower in San Benito), and the region had its share of Tejano superstars, but there was no way to document the history of, say, Toby Beau—who had a Gold record in the late 1970s with “My Angel Baby”—or The Playboys of Edinburg, whose “Look At Me Girl” was one of the hits of 1966.

As I Walk Through The Valley tells the story of those artists, but it does more than just serve as a document of who mattered in the Valley from the sixties on through today—it also tells the story of that stretch of the border as a creative place. The film starts with early rock and roll, but as the sound of the region moved to Tejano, the film follows and ties the rise of the genre to the cultural and political history of the region at the time it became popular in the seventies.

In that way, As I Walk Through The Valley tells a story that’s ultimately about punk rock from beginning to end, even if it doesn’t sound like it to the untrained ear. The rock and roll bands of the 1960s were agitating against a culture that wanted trios and mariachis; the innovators of the 1970s like Esteban Jordan—”the Jimi Hendrix of the accordion”—that gave rise to Tejano were rebelling against an Anglo culture that told Latinos in the area that they were consistently less worthy of attention. By the 1980s, as Tejano got slicker and more polished, Valley teenagers got into punk rock, metal, new wave, and goth music as a way to once more subvert the dominant paradigm.

All of this is the heart of As I Walk Through The Valley. It’s why a documentary that spends eighty minutes talking about bands that few people have ever heard of is nonetheless relevant to the international audience that comes through SXSW. What happened in the Valley mirrors the rest of the world in terms of how bands and movements rose up, rebelled against what came before, and did it again.

And that last part—doing it again—is something that the film spends a lot of time on.

I’m in As I Walk Through The Valley. I was on a reporting trip to McAllen in 2014 when I met with Vela and the film’s co-director, Ronnie Garza. I talked with them about the Valley scene that I was a part of in the early 2000s and about the players who mattered then. I’m identified in the documentary as “scenester,” which—once I got past the initial revulsion I might have had seeing myself described that way when I was 20—I felt proud of. I wasn’t there as a reporter, or to observe and comment on what it was: I was there because it was vital, and important, and it mattered to me.

It was inspiring to see a scene I was a part of documented in a form that didn’t just capture what I saw, but that connected it to a larger culture—one that didn’t start when I got there, and one that continued long after I left and will keep doing so. In the film, I talked about what my friends and I were trying to build during our time as the teenagers with big ideas, but it becomes clear as the film goes on that what’s happening in the Valley now belongs to the people who are inventing it for themselves. There may be benefits to them in having a documentary about what came before, but it’s theirs to build now. That’s how it works, and how it’s always worked—in the Valley, and elsewhere.

The film premiered at the Long Center on Sunday night, and after the screening, a woman from Houston explained that though she didn’t know any of the bands or the music that appeared in the film, she began connecting them with the artists, scenes, communities, and bands that she knew from her own hometown. And for a region that’s so isolated geographically, and whose stories are too often told in the context of crime, corruption, and cartels, that’s a valuable connection. There’s a lot that As I Walk Through The Valley gets right—whether you were a part of it or not. 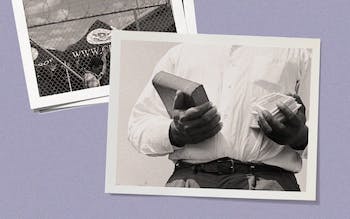