In many ways, the Texas Truck Rodeo is the most Texas thing imaginable. It takes place on a wild-game hunting ranch in Blanco County, with limestone cliffs and live oaks as far as the gaze can scan. There’s barbecue served in a tent, while Willie Nelson songs play over the sound system. Several dozen brand-new trucks sit in a field, ready to be driven over rough terrain and obstacles, as towing and tech demonstrations take place all day. It’s a tailgate party with hill assist.

On the other hand, the Texas aspect of the rodeo is a bit of a façade. When the Truck Rodeo was started by the Texas Auto Writers’ Association in 1993 in the heyday of automotive journalism, TAWA was the definitive good ol’ boys network and the final word in truck reviewing. These days, most of the dwindling number of professional car writers live in either Michigan or California, and that decline shows at the rodeo. At this year’s event, which took place from October 15 through 17, a lot of the attendees weren’t full-time writers. Many weren’t even from Texas. Several came in from Florida, and a majority of the manufacturers’ representatives fly in from out of state. In some ways, the Truck Rodeo is a tourist’s version of Texas, down to the inevitable photo-ops with longhorn steers brought down from Oklahoma.

That said, the trucks at the rodeo are the stars, and they are 100 percent Texas-grade, though not necessarily manufactured here. As a hundred-plus attendees clamor for the first shot at a Ford Raptor or a RAM Laramie Longhorn Southfork Edition, there’s a mad rush to get into the best trucks first. But even if you miss out on the first round of driving and don’t want to get into the Nissan Rogue as a consolation prize, you can play with trailer hitches, check out raffle prizes from Saddleback—the artisanal leather company that sponsors the Rodeo—and eat endless bags of spicy Mexican peanuts. My own activity of choice this year was walking through the field, chasing the ranch’s two pet emus.

But the trucks are always the main focus. Attendees from across the country, and occasionally from around the world, vote on which truck is the best. The winner is crowned the “Truck of Texas,” and for a year, the lucky winning company gets to claim the title during its local football game TV spots.

I’ve been driving in the Truck Rodeo for six years. When I started, the Truck of Texas competition felt a bit like blood sport. Stakes were high for companies like Ford and Ram, representatives of whom, only half-good-naturedly, would whisper that “the other guys don’t really have it this year.”

The stakes got even more exciting a few years ago, when Ram debuted its new “Ram Box” modular storage system. Released alongside all kinds of power-train and design improvements, the system represented a seismic shift in the truck industry. Trucks had been limping along without any significant changes for a while, but suddenly they’d become one of the car industry’s most dynamic segments.  The following year, Ford started showing off their new EcoBoost engines, and their trucks were just as exciting.  Then in 2015, Chevy won the Truck of Texas for the Silverado—frankly, it wasn’t as good as either Ram or the F-150, the industry’s other standard-bearing models, but it was still new. And then last year, Nissan finally caught up in the production cycle and won the Truck of Texas award for a slow-moving, too-big, but fresh-smelling Titan.

This year’s fleet, by comparison, felt a little flat. The truck industry has entered another in-between phase, with no great leaps forward scheduled until at least 2020. General Motors, as part of its ongoing slow death spiral, decided not to send any vehicles to the Truck Rodeo. That meant no Chevys and no GMCs, which in the past had made up about 40 percent of the fleet. And this year’s selection—various F-150s and 250s, sundry Ram 1500s and 2500s, and the usual Titan monsters—didn’t boast big improvements. Compared to a truck from, say, 2010, these models were spaceships, but compared to trucks from a couple of years ago, they were pretty much the same, with better sound systems and backup cameras.

The most interesting vehicles, by far, came in the SUV and compact SUV segments. There was a nifty new Alfa Romeo CUV called the Stelvio, not named after a coffee sweetener but rather a winding Italian mountain pass. I also liked the fast Mazda CX3, which featured a “Grand Touring” package that felt pretty luxurious at a price point under $30,000, passing for affordable in cars these days. The best of show may have been the Volvo XC60 SUV, which had all kinds of cool safety and design amenities, like automatic speed modulation, the tightest lane assist I’ve encountered, and an opera-house quality Bowers & Wilkins stereo system. It was also a plug-in hybrid, and therefore came the closest to feeling like a car of the future.

I had to drive all those cars on-street, but there was also off-road fun to be had at the Truck Rodeo. I creeped a Jeep Wrangler Rubicon, sway bars locked, sideways across a ragged mount of hard-packed dirt. Just for fun, I crawled a Ram 2500 Power Wagon up a sheer cliff face. It was attached to a winch and I had to modulate the throttle at about a half-mile an hour to make sure that the wheels didn’t slip. I survived that experience, just like I survived when I crammed a paprika-colored $150,000 Mercedes G-Class over a sharp rock outcropping.

As this year’s rodeo shows, the truck situation in Texas is as strong as ever. The TAWA members, wherever they live, chose the Stelvio as the “CUV of Texas.” The Volvo XC60 unsurprisingly won “SUV of Texas.” And the Ford F150 will deservedly wear the “Truck of Texas” crown, as it does most years. Already, I find myself looking forward to next year’s rodeo: for the brisket, the emus, and, hopefully, the winning raffle ticket so I can finally score that leather backpack I’ve been coveting. I just hope that Ram brings back their winch. 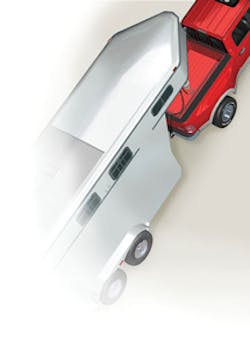 How to Hitch a Livestock Trailer 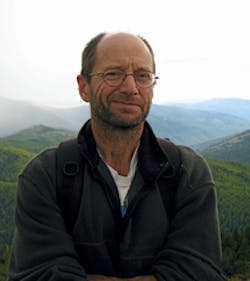