I have heard some refer to Palmetto State Park, not entirely inaccurately, as a “starter park.” At 270 acres, it is small, just like the hardy, evergreen dwarf palmetto for which it’s named. And its five miles or so of manicured trails and boardwalks, wending their way from ephemeral swamp to mesquite forest, make it accessible to folks of all abilities and ambitions. But I think that assessment sells the park short. True, those who venture here expecting the in-your-face drama of a Big Bend laccolith or Longhorn Cavern speleothem might be disappointed. But those who enter the swamp as a sacred place, to paraphrase Thoreau, will be amply rewarded. What Texas Parks and Wildlife calls the Central Texas Tropics (and Google Maps unpoetically labels a “birding hot spot in a forest & swamp”) exists somewhere between earth and water, a soupy landscape slightly unsettling but mostly enchanting. Yes, the trails are easy—the better to notice the yellow flash of a prothonotary warbler or an old wagon wheel forever embedded in a tree that has grown up around it. And how often do you walk a path that leads not to a summit or a waterfall but through a primeval-feeling landscape that by all accounts shouldn’t even be there?

About halfway between Luling and Gonzales, past cow-dotted pastureland and roadside residences that have seen better days, are the Ottine wetlands (pronounced “Ah-teen” and named for Adolf Otto and his wife, Christine, who in the late 1800s founded the tiny village just north of where the park is now). These wetlands, which make up part of the park, are believed to be at least 12,000 years old and are an example of what’s called a relict ecosystem, in which a particular habitat is able to thrive in geographic isolation from its original, larger community. In the case of the Ottine wetlands, the combination of a periodically flooding San Marcos River, a high water table (at one time, at least), and artesian springs resulted in the sort of boggy refuge you’d more likely come upon in the southeastern United States, as well as an unexpected mix of flora and fauna found nowhere else: dwarf palmettos mingling with mesquite trees, white-tailed deer with swamp rabbits, red-shouldered hawks with prothonotary warblers.

Though it’s closer to Austin and San Antonio than to the Gulf of Mexico, Palmetto is a stop on the Great Texas Coastal Birding Trail, and birds of all kinds are what many visitors come for; around 240 species have been sighted in the area, and it’s about as far west in Texas as you can see Eastern varieties like the Kentucky warbler and the pileated woodpecker. A few friends and I visited in February (a good time, apparently, as the sparse understory makes the aviators easier to spot) to walk a few of the short trails, their names more or less a reflection of the kind of terrain you can expect to see: Ottine Swamp, Palmetto Interpretive, San Marcos River, and Mesquite Flats (with little spurs named Mossycup, for North America’s largest native acorn, and Canebrake, for North America’s Crotalus horridus, or timber rattlesnake, more commonly found worrying hikers farther to the east). And though our birdwatching capabilities were limited (someone forgot the binoculars), we did at least hear a few woodpeckers and spot a collection of cardinals scouring the grounds at the group campsite, a heron stalking the banks of the park’s Oxbow Lake, and a few vultures, their enormous black bulk weighing down spindly branches high in the treetops.

Other critters abound, like frogs and turtles and otters, but as they tend to make themselves scarce, the flora takes the starring role. Spring offers more-lush vegetation, like bluebonnets and yellow irises. But the winter tableau is no less arresting, set against a two-toned backdrop of steel gray (the slender elms and ash and mesquite on top) and vibrant green (the palmettos on the bottom). We saw dusty-purple native wood violets and fuchsia-hued red buckeye, ethereal Spanish moss, and twisty Alabama supplejack (rattan vine), winding among the trees like so many petrified snakes. And, of course, dense stands of dwarf palmetto, incongruously tropical, their fan-shaped pointy leaf blades going clackity-clack in the breeze.

No visit to a Texas state park of this era (Palmetto opened in 1936) is complete without taking a moment to appreciate the handiwork of the Civilian Conservation Corps, who labored between 1934 and 1937 on the usual firepits and picnic tables but also buildings like the refectory, a solid structure whose lichen-festooned sandstone makes it look as if it has always been there, deposited long ago by a rampaging river (in 1998 a flood covered all but the very top of the roof). Along the interpretive trail is the CCC-built water tower, powered by a hydraulic ram pump (temporarily out of commission, thanks to Hurricane Harvey). And then there’s the most unusual of the CCC contributions, near the park’s playground and the sole rentable cabin: a simulation of a mud boil, a natural phenomenon once common to the park in which seeps and fissures in the ground allowed heated water to bubble to the surface (the mud boils pretty much dried up in the seventies, likely because of drilling). An artesian well supplies the water for the mud boil re-creation (as well as for nearby ponds), whose burbling water, sulfurous smell, and carpet of algae evoke a milder (and educational!) Bog of Eternal Stench.

The Palmetto pill snail was discovered in Palmetto State Park in 1971. Its favorite habitat is the underside of a log or rock, within a few feet of the CCC water tower.

Bogs. Dense patches of trees. Extinct mud boils. Murky lagoons. You can probably guess where this is going, especially when you throw in leaden skies and chill winds and sporadic drizzle. As in many a riparian respite, mysterious creatures lurk, and in this neck of the woods it’s a hairy biped called the Ottine Swamp Thing; the park-sanctioned illustration looks to me like a cross between Bumble the Abominable Snow Monster and Davy Jones from Pirates of the Caribbean. Post-visit internet research into the world of cryptozoology sent me down the jackalope hole, poring over “incident reports” (“What we heard was NOT a cow”) regarding an impetuous creature with a predilection for throwing rocks and shaking car bumpers and mobile homes, as well as “an extraordinary knack for concealing itself among the palmettos.” That is indeed extraordinary, as the plants grow to only about four feet tall.

I would have been delighted just to see a feral pig, but there’s plenty of wild and woolly wonder at Palmetto, which is far more seductive than it is scary. It’s otherworldly, for sure. It’s not hard to picture it as the stomping grounds for beings real and imagined; my friends and I half expected to see alligators and wouldn’t have been too surprised at a small dinosaur. Alas, we came across nothing more disruptive on our peaceful peregrinations than a trio of bicycling boys and a (leashed) pack of exuberant Pekingese. Park warning signs advise to watch for snakes, but we didn’t see any of those either, likely because of the cold weather and because for them, particularly the shy, docile timber rattler, we are the Ottine swamp things. But do tread carefully. As Emily Dickinson put it, “Sweet is the swamp with its secrets, / Until we meet a snake; / ’Tis then we sigh for houses, / And our departure take.”

This article originally appeared in the April 2019 issue of Texas Monthly with the headline “Creatures From the Lagoon.” Subscribe today. 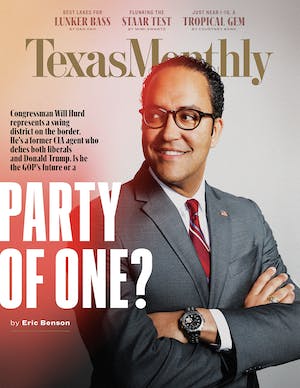