Opening day for whitetail deer, somehow not a state holiday, is just days away on November 2. Most Texas hunters will have long ago figured out their plans for deer season. Many will be readying the deer camp on a favored lease. Others, lucky enough to own their spread, will be making plans to hunt their place.

Those who don’t own land or can’t afford the ever-rising cost of a good lease have other options. Maybe you were lucky enough to score a permit from the Texas Parks & Wildlife Department’s “Drawn Hunt” lottery. The Drawn Hunt program is pretty great: it allows average Joes and Janes to harvest whitetails, doves, javelinas, and a further assortment of furry or feathered game in dozens of state parks and state and federal wildlife areas, like superpopular Chaparral Wildlife Management Area, in the brush country southwest of San Antonio, or Powderhorn WMA on the coast near Port O’Connor.

Too bad the application deadlines have all passed for this year’s drawn hunts. Even so, all is not lost.

For the unlucky, the procrastinator, or anyone who didn’t inherit a glorious chunk of undeveloped ranch land from mee-maw and pa-paw, there are plenty of hunting grounds in Texas completely open to the public. It’s not as easy as plopping down in a tree stand or deer blind next to a corn feeder and waiting for a half-tame buck to waltz into your line of sight. These animals are truly wild and won’t be lured in for an easy kill. But here, anybody with a hunting license and a willingness to get off the beaten path can show up, maybe pay a small fee, and take a shot at a trophy mount or meat for the freezer—no lottery, lease, or family land required.

Nestled among rolling hills in the Piney Woods—you know, O’ the Pines—this forest-rimmed reservoir two and a half hours east of Dallas allows rifle hunting for deer across 4,500 acres. To reach the most adventurous hunting areas, trek to the remote upper reaches of the lake’s floodplain, where Big Cypress Bayou feeds into the reservoir to form a maze of hardwood lowlands and upland pine forests. You can also hunt for deer right below the dam.

“By all accounts, it looks like a pretty good year,” says Robert Henderson, a natural resource specialist for the U.S. Army Corps of Engineers, which manages the lake. “The mast-producing trees are loaded up with nuts and acorns, so it looks like the deer will have plenty to eat, and the ones I’ve been seeing look pretty healthy.”

I have often hunted hogs, ducks and squirrels at Lake O’ the Pines and usually found the bottomlands to be teeming with wildlife. Pro tip: much of the Army Corps land along the lakeshore—and on islands in the reservoir itself—can be overrun with brush, which challenges hunters to sight a deer from much distance until the leaves fall off during winter. “Concentrate on finding an area with a lot of oak trees dropping acorns for the deer to eat,” Henderson suggests.

Backups: Most reservoirs managed by the Army Corps in Texas allow public hunting. However, hunting dates, method and type of game taken, and permits vary from lake to lake, so check ahead.

The whitetails graze in relative peace among the rugged canyons and limestone cliffs where the Devils, Pecos, and Rio Grande feed into Amistad Reservoir on the Texas-Mexico border north of Del Rio.

“We’ve got way too many deer out here, and hunters are not particularly successful,” says Greg Garetz, chief of interpretation and resource management for Amistad, which is part of the National Park Service. Garetz notes that the area’s desertlike 17,800 land acres—and relatively strict regulations—prove challenging for would-be hunters. “We only allow archery, and we don’t let them bait with corn or anything,” Garetz says, “so they have to do the old Daniel Boone technique of reading deer signs and getting up ahead, and waiting for deer to walk up to them.”

Texas’ archery season for deer ends Nov. 1, so you’d need to hurry to bag a whitetail this year. The good news? You can always hunt a plethora of exotic species, like mouflon sheep, aoudads, blackbuck, and axis, year round.

The stocky yet slim-legged native pronghorn, often mistaken for antelope, is the star by far at this federally owned prairie in the extreme northwestern corner of the Texas Panhandle. Pronghorn hunts are managed by the Texas Parks & Wildlife Department and can be hard to come by. (Last year, twelve hunting permits were awarded from a pool of 6,666 applicants.)

However, this U.S. Forest Service-managed prairie, which sprawls across 230,000 acres of grassland where the state boundaries of Texas, Oklahoma, and New Mexico meet, is wide open for whitetail deer enthusiasts during the hunting season.

Just keep one thing in mind, says Mike Atkinson, district ranger: “It’s a challenge to make people understand we’re not just one big, contiguous block of land,” he says. “They’re individual blocks of land that are under our administration. Some people come out here expecting to find this one big area all under a certain boundary, and people get mistaken about whether it’s public or private.”

The patchwork of land was acquired by the federal government to restore the prairie following the Dust Bowl 1930s. For a safe bet, seek out 30,000 acres of contiguous, federally owned and publicly accessible prairie locally known as the High Lonesome, not far from the public Thompson Grove campground.

“Since the country is so open, you have to be very careful,” Atkinson warns. “Although you may feel you’re in the middle of nowhere, you still have bird watchers, hikers and other recreational users, so know where your shot is going.”

Also hunt: Prairie dogs, believe it or not, and to a lesser extent mule deer, ring-necked pheasants, and scaled and bobwhite quail.

Permit: None, except for the annual drawn hunt for pronghorn sheep

Looking for hunting grounds closer to Houston? A smattering of state and federal lands, centered around two reservoirs on the Neches and Angelina rivers, offer plenty of room for public hunts in Deep East Texas, about 130 miles northeast of the Bayou City.

Near Lufkin and the small town of Woodville, hunters have their pick from the 153,00-acre Angelina National Forest, on both sides of massive Sam Rayburn Reservoir, and the state-run Angelina-Neches/Dam B Wildlife Management Area, where the two rivers come together north of B.A. Steinhagen Lake.

Public hunters are also welcome on smaller and more isolated tracts of land the Army Corps of Engineers manages for flood control at B.A. Steinhagen. Additional hunting opportunities can be found at the Neches River National Wildlife Refuge, a corridor of public land along the river as it flows south of the reservoir.

“The animals are tougher to hunt, and they know people better than we know them,” says Stephen Lange, a lifelong public hunter and longtime Texas Parks & Wildlife program specialist who most often hunts for a veritable buffet of woodland creatures in the Angelina National Forest. He also recommends a particularly isolated corner of the sloughs and ridges on 5,500 land acres of the Angelina-Neches WMA, where the Angelina and Neches rivers come together to form a big island—or maybe it’s a peninsula—known as the Fork.

“This is a true woodsman experience,” Lange adds. “You have to get out to work the vegetation, the topography, the wind, the landscape, knowing what the animals eat and where and what time of the year they’re going to frequent areas. And I think that’s part of the challenge.”

Permit: Not required in the Angelina National Forest; $48 annual public hunting permit for the state WMA

Backups: Anybody can hunt the nearby Davy Crockett and Sabine national forests without a permit; hunting in the Sam Houston National Forest, which is more popular with people driving up from Houston, requires an annual public hunting permit from TPWD. 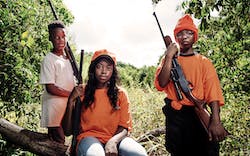 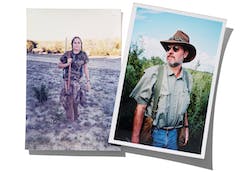