When Garden and Gun writer Guy Martin first met San Antonio architects Richard Lake and Ted Flato some years ago, Lake suggested they all sit outside.

“Let’s have drinks on the porch so that you can see that we live our creed,” Lake said, referring to Lake/Flato’s love of the breezy, screened, and shaded spaces that have been part of Texas since before the days of air conditioning. As Martin writes:

Flato and Lake are maniacs for siting buildings to capture the “breeze”—they incorporate old-fashioned dogtrots, they create shade by extending eaves or by extending shed roofs, they make screens to shield the sides of their buildings from the merciless Texas sun. This search for air finds expression in almost every building they have designed—even the gargantuan AT&T Center has a giant sombrilla, or “umbrella,” in the form of a shaded back porch made of steel slats, under which Spurs fans do their tailgating.

The “breeze,” as they call it, is actually two things. In San Antonio, the cooling summer wind is a prevailing southeasterly coming off the Gulf. This is the breeze that the architects encourage to flow through their structures. The “bad” breeze is the cold winter northwesterly, but the wind is a minor villain. In Texas, and thus at Lake/Flato, the sun is Public Enemy Number One.

“Best thing,” Lake concludes, “is that you don’t even let the sun touch the sides of the building.”

Martin’s six-page spread, which is primarily about Flato, can be found online as well as in the December/January issue of Garden and Gun, the magazine for all things Southern. (Texas, Martin writes, “is the South’s gateway to the West; it’s our bridge state, the territory in which farms give way to ranches, topsoil gives way to rock, the pig gives way to the cow, the wet gives way to the dry.”)

The story discusses some of Lake/Flato’s big ticket projects, such as the Pearl Brewery complex and the AT&T Center in San Antonio, but it is really built around a couple of Texas ranchers: Tommy Lee Jones, for whom Flato built two barns for Jones’ polo horses (“Ted Flato builds the best damn barns in the country.” Jones is alleged to have said about Flato once), and Greg and Linda Bird, who hired Lake/Flato to build their family complex, Cross Timbers, in Lipan. Martin also explores Flato’s fondness for steel, and the way he incorporates the metal to evoke Texas’s history of both ranching and the oil fields.

In addition to the story, which even includes an uncharacteristically loquacious quote from Jones about his horses and the barns, there is a 26-frame photo gallery of everything from Rolling Stone publisher Jann Wenner’s Sun Valley, Idaho, bathhouse to a Lake Austin “Settler’s Cabin.”

This month Lake/Flato also made Architectural Digest‘s “AD 100” list of the world’s best architects and designers. 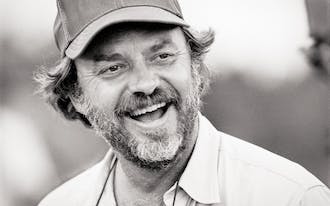 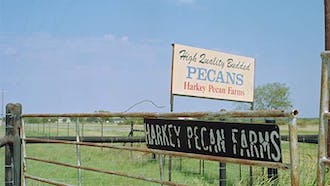 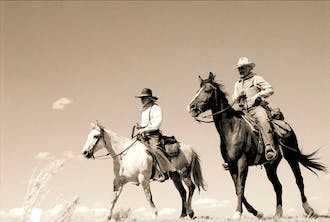