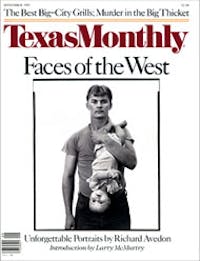 SAN ANTONIO’S LIBERTY BAR is a landmark for many reasons: it has been in continuous operation since 1890 and the building has been owned by the same family for just as long. But also the Liberty Bar has a certain status as one of the world’s “leaning“ landmarks, perhaps eclipsed only by the Tower of Pisa. Thanks to a flood in the 1920s, the Liberty (then the Liberty Schooner Saloon) took on a westward tilt that it maintains to this day. Occasionally a concerned patron of the restaurant will report the tilt to the city’s building inspection squad, says Liberty Bar owner Dwight Hobart, but each inspection arrives at the same verdict: the building is in fine shape.

The food at the Liberty is also in fine shape. A precocious mix of Southern cooking, interior Mexican dishes, New American cuisine, and comfort food, the offerings at the Liberty can be both surprising and soothing at the same time. When you’re looking for just plain comfort, there’s the Liberty Bar’s buttermilk pie—a wondrous tribute to the chess pie, which is what the buttermilk pie really is. (Don’t ask what a chess pie is, because its origin is unclear—but the name may be a corruption of “Oh, it’s jes’ pie…”). The specials of the day are usually a delight—succulent pork loin with a bracing dash of rosemary or Fanny’s pot roast are favorites. And sometimes, you don’t know what the cooks will whomp up—one day it was a fascinating green gumbo, initiated by a gift from a customer who brought in a mess of collard greens. You may get the unexpected at the Liberty Bar, but one thing you can always expect is an interesting meal. “We just want to cook food that’s basic, fresh, simple, and good,” says Hobart.

Go to the Liberty Bar website for the current menus.

Geranium Cream Serve alone as a dessert with blackberry sauce, or with pancakes or French toast for brunch.