We moved to Waxahachie in the early forties, when I was about ten years old. I was a seriously dyslexic child, and no one quite knew what dyslexia was in those days. People just thought I wasn’t too swift. And my way out of it was drawing. It was something that I could do that could hold my attention, and it made me feel a sense of accomplishment and pleasure. So I had this great ambition to be an animated cartoonist. When my high school principal, who was a lovely man, found out that I was applying to the University of Texas, he came to me and said, “Please don’t do it. You will never make it.” I really only made it through high school because my mother played bridge with my high school teachers, and it would have broken up the bridge game. Miraculously enough, I was accepted to the university on probation, and it was there that I was able to flourish. UT turned out to be probably the best place in the whole world that I could have gone. 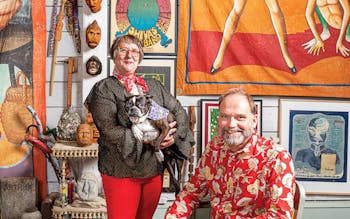