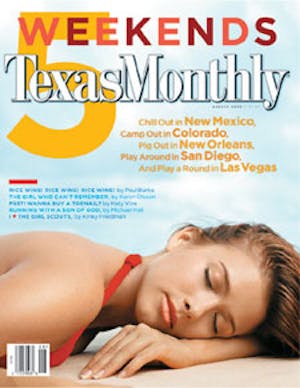 THE FIRST TIME I WENT to a charity car wash, Richard Nixon was president. I think some high school cheerleaders were trying to raise money to go to a cheerleading camp in Fat Chance, Arkansas. My vehicle was a dusty green 1953 Plymouth Cranbrook convertible with a wolf whistle and a Bermuda bell. I was hoping to have an overnight with a few of the cheerleaders myself. Of course, that never happened. Nixon would not have approved. Besides, I was a late-blooming serious.

There were a great many things back then, no doubt, of which Nixon and society in general would not have approved. But life was different in those days—or maybe it was exactly the same, only we didn’t know it. It seemed, for instance, that none of my high school friends came from broken homes. Divorce was almost unheard of. Nobody knew what a single parent was. And, certainly, no one I knew had a parent in prison. I don’t really think I was sheltered. I just think I was out to lunch.

The second charity car wash of my life was held recently in the parking lot of the Hotel San José in Austin. I was driving a silver 1999 Cadillac DeVille that had once belonged to my father and had the distinction of being one of the few Cadillacs in Texas with a Darwin fish emblem. The vehicles had changed, and I had changed—the last thing in the world I was interested in was a 58-year-old cheerleader. The game had changed too, in this tale of two car washes. Whether we like it or not, at some indefinable point in time, we all forsake our childhood games and become players in the game of life.

The girls at the second car wash were not high school cheerleaders. For one thing, most of them weren’t old enough to be in high school. For another, in their brief lives, there hadn’t been a hell of a lot to cheer about. Girl Scout cookie season was over for this particular troop. So were a few other things, like home, family, and childhood. That’s because every girl in this troop has or has had a mother in prison. They are Troop 1500, otherwise known as the Enterprising Girl Scouts Beyond Bars, the Austin chapter of a national program that has served more than 45 girls with incarcerated parents since its inception in 1998.

And they are enterprising. The car wash was a success, with the girls washing, soaping, and spraying fifteen cars, one bike, themselves, and several customers. And many of the girls are looking confidently to the future. One bright, witty thirteen-year-old who was raped by an uncle while her mother was in prison for running a drug ring reads at least one book a week, and when she grows up she wants to be a librarian. A fifteen-year-old whose mother is serving time for a gang-related murder wants to be a marine biologist. A fourteen-year-old whose mother, a heroin addict, stole and forged checks wants to be a social worker; judging by how devotedly she helps the younger girls, she may be well on her way. Then there’s the pretty twelve-year-old whose mother is serving fifty years for murder: Her stated goals are to be a horseback-riding instructor and to work with the seals at Schlitterbahn. (There are, to my knowledge, no seals at Schlitterbahn. They may have them, of course, by the time her mother gets out.) And then there’s the most soulful little nine-year-old in the world: She wears beautiful braids and has never been able to live with her mother, who’s in for the usual things—prostitution, theft, and using and selling heroin and crack cocaine. And the kid? When she grows up, she wants to be a veterinarian.

Are any of them going to get there? You might be surprised. According to Julia Cuba, the program executive of the Lone Star Council, which oversees Girl Scout troops in eighteen counties in Texas and Oklahoma, 96 percent of the girls in Troop 1500 have stayed in school. Ninety-nine percent have avoided teen pregnancy. Ninety-eight percent have kept out of trouble with the legal system. These are remarkable numbers, especially considering that girls whose mothers are in prison are six times as likely as other high-risk groups to end up in prison.

In the United States there are approximately thirty Girl Scouts Beyond Bars programs, most of them limited to providing only one service: once-a-month visits to the prisons. The Austin chapter, led by Cuba and regularly evaluated by Darlene Grant, of the School of Social Work at the University of Texas at Austin, differs from the others in that it concerns itself with a girl’s family, school, and social life and helps guide her mother’s reentry into the free world. The program has been so successful, in fact, that the girls are the focus of an upcoming PBS documentary by award-winning filmmakers Ellen Spiro and Karen Bernstein (the girls are filming part of the documentary themselves).

After I dried off from the car wash, I went out to dinner with the girls. They are a smart, free-spirited, fun-loving bunch of kids. I’d never met them before, and from what I know of life, our paths may never cross again. I’ve always found it interesting how most of us seem to place our energies and efforts behind only those causes that directly affect our own lives or those of our families. In other words, there are better things to do on a beautiful Saturday afternoon than drive a van full of kids out to Gatesville. I was reminded of a lady I once met whose only grandchild had died. She told me, “I used to say, ‘This is my grandson, and those are other people’s kids.’ Now I say, ‘Every child is my grandchild.'”

So why did I allow myself to get soaked to the bone at a Girl Scout car wash in the first place? Just lucky, I guess. And lucky is the right word for it. Most of us were born lucky. Lucky to have a home and a family. Lucky to have someone to provide hills to climb and stars to reach for. Lucky, when we fell, to have a catcher waiting in the rye. The girls at the car wash, of course, have known precious little of those things. Outside of Julia and Darlene, all they really have is each other. Maybe it will be enough. I certainly hope so. As we like to say in rock and roll, the kids are all right.