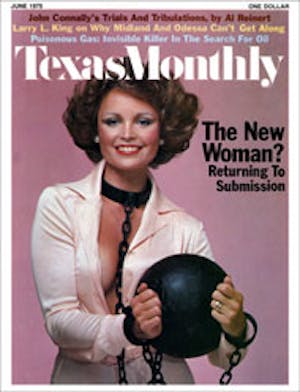 Ten years ago the Class of 1965 stumbled out of college into the beginnings or the American involvement in the Viet Nam war. The previous autumn Mario Savio had helped start the Free Speech Movement at Berkeley and students for the first time flexed the muscles of student power. Robert Kennedy was attorney general, Martin Luther King had just helped lead the march on Selma, and students were beginning to question the values and roles society customarily had ready and waiting for them when they graduated.

Today the Viet Nam war is over, the draft is gone, and both Robert Kennedy and Martin Luther King are seven years in their graves. The issue for the graduate of 1975 seems to be not so much whether he will accept society’s values, but whether he will be able to get a job. Perhaps noble ideals were easier for students to embrace when they enjoyed the economic security provided by dear-old-bourgeois Dad and an open job market; now, the romanti­cism of the Sixties seems to have lost most of its charm, leaving in its place a rush to secu­rity. In the Sixties, Dylan sang, “Twenty years of schooling and they put you on the day shift,” to which we might now add the Seventies refrain, “If you’re lucky.”

For many students, the most disillusioning fact about The Big World Out There is not that it is corrupt or hypocritical, but that it doesn’t have a job opening for everyone. And so good old-fashioned anxiety is back in style, right there amid the return to beer and fraternities and sororities. There does seem to remain some collective memory of that so recently departed previous generation of students, those Old Ones who marched, picketed, questioned. So today’s graduate is not, cannot, be like the Class of 1955 any more than he can be like the Class of 1965. There is also some recognition and perhaps even a dose of respect for, yes, Dad and Mom, who by and large managed to find and hold jobs, buy a house, and raise a family, perhaps inspiring a common question among the many students interviewed, “How am I gonna do that?”

After I graduate, I’ll go to medical school in Ar­kansas. When the economy crashes people are always going to need doctors. I really have very little faith in the system right now. I want to work with people. Fifteen years from now I’m definitely going to have eighty acres outside of a medium-sized town somewhere in Arkansas or in the Rocky Mountains or anywhere like that. I’m going to have a garden full of vegetables, and a catfish pond, and I’m going to be working about sixteen hours a day, probably pushing cold pills, and being an armchair psychiatrist, and being happily married, hopefully to a woman who likes to make love all night and get up and run in the mornings. I want to be a good doctor, I want to have a family and be relatively self-sufficient, a little land, a few animals—I’m going to marry a nonliberated woman who won’t mind tending them.

Three or four years ago I would have gone off to New York to become a dancer, but now I’m scared to do it. I don’t feel so impulsive, I feel more of a need for security. Five years ago, a lot of people wanted to go out and conquer the world. Now people feel more practical about their lives. School offers a lot of security. Sometimes I really feel the need to have a man around, but that also creates a need for more independence, because I really want to make it on my own. Ten years from now I’ll be thirty-one—well, by then I hope I’ll be married, maybe with one or two children, hope­fully in dance or dance therapy in some area, either teaching or working with children—who knows?

I’m glad to be graduating. I’m ready to get out; it’s been four years of the same old stuff, and it’s time for a change. I plan to go to work for a company, go through a finance program, work toward being a finance man­ager. That’s the thing, that’s it, trying to find a job, because see once you get out you’re on your own. Every­body’s looking for a way to make it. You can mess around for a while, but then you’re gonna starve. I wouldn’t say everybody’s in a panic over jobs, but there’s a little concern, you know. I’d like to be raking in big money, laying back, just sitting back, going to a job every day, coming back home, lazy time, working time, and just live my life on out, live a peaceful life. It’s possible I’ll be married; I don’t want to do all that by myself. I’m gonna be in there plugging, gonna keep on truckin’.

Eventually, I want to be a doctor. I want to be a gynecologist and do research on venereal diseases and different diseases of that type. I have some friends, we’re gonna start some corporations, some clinics and pharmacies and stuff like that. We’re gonna try and make some malls, put in clothing shops and stuff. There are not too many things open to blacks other than medicine and pharmacy. Most of ’em are just happy to come out being a teacher, which doesn’t pay too much. Just knowing that I can take an oil company over, start a monopoly—it’d be fun doing that. What I’d like to be doing is working with people. Being a doctor has always been a childhood dream with me. When I get through with my train­ing, my life’s gonna be simple, not too flashy. I’ll be serious-minded by then maybe. I’d like to be able to get some of the things I’ve always wanted—I’d like to have a big home, suburbs, my own car, something to call my own, a quiet neighborhood.

After I graduate I’m going to a dental hygienist school. I think I’ll enjoy the work. You get to know a lot of rich doctors and dentists, you know, and I’m thinking of my future and my family. It’s a good line. At Blinn, all the ath­letes run around together, and that’s the crowd we kind of run around with. There’s always parties, drinking, that kind of thing and whatever leads to that. It’s the only thing to do here; there’s no place to go. In ten years I guess I’ll be married; but I’m not in a rush. I just want to get a good job, save my money, and maybe then find someone. Maybe three years after my marriage I’ll have five children. I think it’s neat to have a big family. That’s what I’d like, though it’s gonna depend on what my husband wants, too.

I was a PE major, but then I decided to go into nursing. What could be more interesting than studying about your own body? When I first joined my sorority I liked it a whole bunch and I still like it a lot. I’m not the typical girl that people would expect a sorority girl to be. I’m not dainty and a lady. I go bananas when I feel like going bananas. Most of my friends are education majors, and they’re really worried about jobs. Me, I want to help peo­ple. I’d like to work for Dr. DeBakey so that if anything happened to my Daddy, Dr. DeBakey could fix him. My parents just give and give and give, just so I can do well. Going to college really made me appreciate them.

After I graduate, I’ve got a four-year commitment in the Air Force. I’m gonna be a missile launch of­ficer, they’re the guys who sit in the silos and they run the computers. I’m getting married in May. Unless we think she needs work or she wants to work, my wife’ll probably live in a house on base or an apartment off base, and she’ll either get in women’s clubs and stuff like that or she may find something in the area to do. We’ve never had any demonstrations here. The only dem­onstration I know of that we’ve had here was when they hired the new president, President Williams, everybody marched over to his front lawn to welcome him. One reason the Corps there is getting so much smaller is that people just aren’t crazy about the military life anymore. Besides Viet Nam, they associate the military with the politics of the nation and people don’t want anything to do with anything that’s got anything to do with government. Right now I’m glad I’ve got an Air Force scholarship, ’cause I’d hate to be in the situa­tion I’m in, with a political science degree, and getting mar­ried, and then no job ’cause there’s really not any for my degree. I feel like I’ve got some security until I can get another degree and find out what I want to do.

I didn’t take a course load with a job in mind—I majored in anthropology and economics. Today I wrote off to this guy at the University of Alaska. He’s going to run a salvage archeology program in conjunction with the pipeline being built up there. I doubt if that’ll pan out. What I’ll probably end up doing next year is working in Alaska on the pipeline, ’cause I’ve worked for a pipeline company summers, and… a lack of anything better to do. Then, after I work for a year I’ll probably come back down here. I might like to work for the park service or the forest service or just about any numbers of things—I’m really not that concrete.