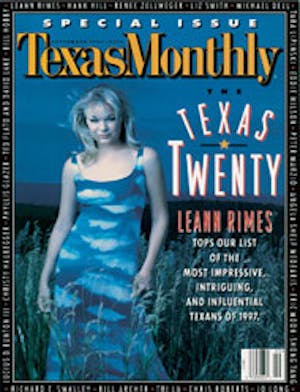 J. DAVID BAMBERGER DOESN’T do anything small. He has 115 scimitar-horned oryx on his ranch near Johnson City—the largest purebred herd in the world. During the past 28 years he’s cleared 3,300 acres of junipers off his 5,500 acres and planted thousands of native trees in their place; in the process he’s worn out 38 chain saws. He’s even crossbred his cattle with bison.

So why should his new bat cave be anything other than the biggest? A longtime trustee of Austin-based Bat Conservation International (BCI), the 69-year-old Bamberger decided five years ago to create what he termed “the world’s largest man-made structure specifically designed for the freewill use of half a million mammals.” (Bracken Cave outside San Antonio attracts some 20 million a year, but it is not man-made.) The former CEO of Church’s Fried Chicken budgeted $150,000 and asked Jim Smith, a design engineer he met in New Mexico, to design an education- and research-oriented bat habitat known as a “chiroptorium.”

On a warm summer night, by the light of a full moon, I tagged along as a couple dozen bat enthusiasts previewed the chiroptorium during its first phase of construction. Its steel skeleton resembled a giant jungle gym or maybe the framework for a Godzilla-size igloo. When the cave is completed, which should be around the beginning of September, it will be a graceful series of domes and connecting passageways fashioned from twenty tons of rebar, eight thousand square feet of wire lath, and two hundred cubic yards of Gunite. When the bats arrive, their twilight flight through the sweeping arched entrance will be stunning. Even more impressive will be the experience of viewing the dozing bats, which roost as thick as five hundred per square foot, through observation windows and in infrared light with specially equipped video cameras.

Once Bamberger has built it, will they come? Bats are persnickety and quirky nesters, particularly when it comes to the temperature. Stick up a precisely constructed bat house, and they might move in to your attic. Put up two identical bat houses—one black and one white—and try to guess which one, if either, the finicky creatures will call home. Build a bat cave on a sprawling Hill Country ranch, and they might live under a bridge instead. But Merlin Tuttle, the executive director of BCI, is sure that Bamberger isn’t batty. “Free-tailed bats have moved into every place we’ve inadvertently created for them over the last hundred years,” Tuttle says. “I see no reason why they shouldn’t move in to a place that we’ve specifically created for them with their every need in mind.” Smith too is certain that if one bat shows, more will follow: “One will get you two will get you four will get you eight.”

Bamberger isn’t taking any chances: He’ll obsessively control the temperature in the cave and spread bat guano on the floor as a kind of batnip. Guano, it turns out, is valuable in more ways than one: Bat droppings are one of the richest natural fertilizers and contain bacteria that neutralize harmful chemicals. “If half a million bats show up, the figures for harvesting and selling it aren’t bad,” he says. And if the chiroptorium reaches maximum capacity, he hopes more ranchers will see the benefits of creating their own caves. “After all,” he says, “there are other nuts out there besides me.”