The Barbara Jordan Post Office is a faceless 500,000-square-foot mail-sorting facility that squats grimly on the north bank of Buffalo Bayou in downtown Houston, near the intersection of I-10 and I-45. Built in 1962 by Wilson, Morris, Crain, and Anderson, the architecture firm that later designed the Astrodome, the five-story concrete-and-glass Brutalist behemoth features Cold War-era touches like an underground bomb shelter. Last year the USPS, staring down the barrel of budget cuts, $13.7 billion worth since 2006, decided to sell the building, and the 16 acres on which it sits, to Houston realty company Lovett Commercial, which announced plans to convert the site into an ambitious mixed-use development called Post HTX.

Construction on Post HTX is scheduled to take up to eight years, so in the meantime Lovett Commercial leases out the decommissioned post office for special events, like last weekend’s Day For Night, a buzzy art and music festival, now in its second year, that transformed the building’s bottom two floors and its penumbra of barren, windswept parking lots into the setting for a two-day bacchanal that by turns resembled a warehouse rave, an adult haunted house, and one of Ken Kesey’s LSD jamborees.

Last year’s inaugural Day for Night, held at Houston’s Silver Street Studios and featuring performances by Kendrick Lamar and the Philip Glass Ensemble, made enough of a national splash to catapult the festival into Consequence of Sound’s ranking of the Top 10 Music Festivals of Fall 2016, ahead of long-established favorites like Coachella, Glastonbury, and Lollapalooza. The message was evidently received by the world’s festival-going legions, who descended en masse on Houston Saturday afternoon like a plague of glittery, day-glo locusts. 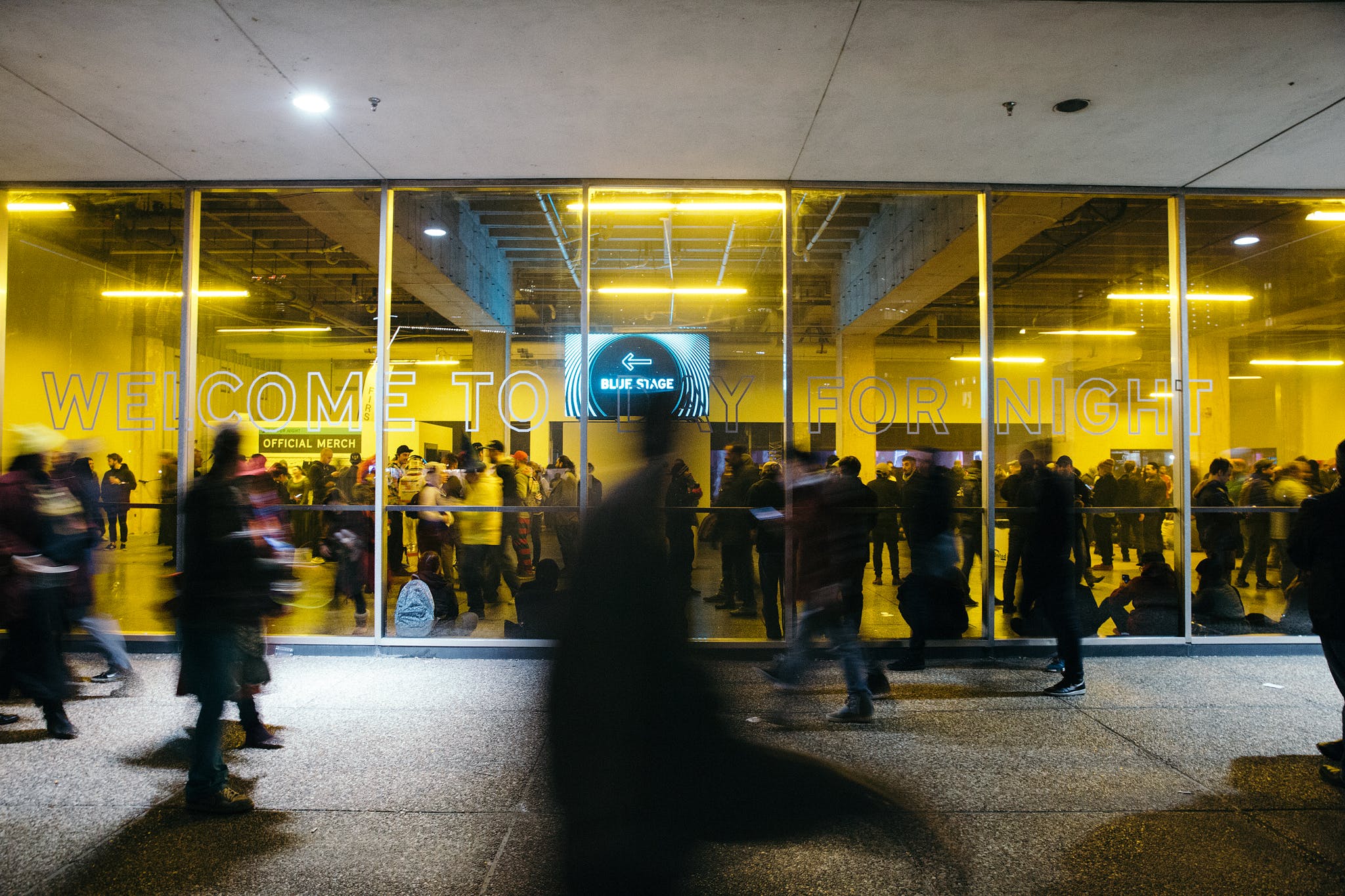 Scuttling from their hotels or disgorged from their Ubers, the painted hordes streaming along the downtown streets, through the festival gates, and into the quondam post office brought to mind the sack of Troy by the assembled armies of the Greek world. Every tribe had sent its emissaries: the Hipsters were represented, of course, twirling their artful mustaches and flaunting their thrift-store rags. So were the Punks, the Hippies, the Ravers, the Goths, the OGs, the B-ballers; there were potheads, cokeheads, acidheads, sneakerheads; people rolling Molly, people tripping on shrooms. Even a few Squares managed to slip in.

What this motley army found upon entering the building was two sprawling, dimly lit floors shrouded in smoke from hidden fog machines that seemed to be in constant operation. In a mostly futile attempt to manage crowd movement, the stairwells were designated “Up” or “Down”; visitors attempting to descend an “Up” stairwell were sharply reprimanded—even when a fire alarm, one of many, sent people scurrying to the exits on Saturday afternoon.

Hidden within the fog were 11 light and sound installations (three more had been installed outside) that ranged in quality from the genuinely mind-blowing, like Tundra’s “Outlines”—a three-dimensional grid of flickering red lasers that evoked a futuristic prison—to the merely insipid, like Damien Echols’s “Crimson Lotus,” a set of faux-mystical “sigils” hanging on a wall, each bearing some arcane significance explained by Echols’s disembodied voice. Among the most popular installations was a long row of cleverly constructed lights and mirrors created by Nonotak, a Paris-based duo.

There was also music, which was performed simultaneously from one indoor and three outdoor stages, from three in the afternoon until well past midnight, by dozens of bands of every conceivable genre, from the Lebanese musician Marcel Khalife, who played an Arabic instrument known as the oud, to the Australian-German DJ Joshua Head, who performs under the name Anklepants and whom Vice once called “the melancholic robotic phallus face of electronic music.”

Austin’s own Butthole Surfers reunited to play their first live show in over five years, but Day for Night’s real coup was luring the legendary British DJ Richard David James, better known as Aphex Twin, across the pond to play his first American show in eight years. And although James didn’t appear on stage during his set, leading to doubts about whether he was even in Houston, he did release a new 12-inch record, on sale only at the festival, to mark the occasion.

Another festival standout was director and composer John Carpenter, who led a six-piece band in hard-rock renditions of the theme music from his films Halloween and The Mouth of Madness while clips from the films were projected behind him.

Along with Aphex Twin, the headliner of the festival was the unclassifiable Björk, whose multimedia exhibition Björk Digital proved so popular that some festival-goers waited in line for up to eight hours for a chance to don an Oculus Rift virtual reality headset and check out the view from inside the Icelandic chanteuse’s mouth. Less well-received were Björk’s two DJ sets, on Friday and Sunday nights, which she performed wearing a mask and partially hidden behind a wall of greenery. Attendees hoping to hear some of Björk’s own music were instead treated to a cacophony of nature sounds, musique concrète, and industrial noise, accompanied by some frenzied gesturing by the otherwise mute singer.

Perhaps the top talking point of the festival, in the end, was the weather. Around 10:30 on Saturday night the temperature dramatically plunged about 30 degrees in what seemed like a matter of minutes. Attendees who had been sweating through their t-shirts and shorts only minutes before found themselves shivering in the rain that began to fall. On Sunday, when the temperature barely cracked 45 degrees, nearly every band that played on the three outdoor stages managed to bring up the un-Texas-like weather—a reminder of why most outdoor music festivals take place in the summer. “Man, it’s cold as a mother out here,” groused jazz saxophonist Kemasi Washington, wearing a long winter coat, before launching into a defiantly fiery set.

Not everyone at the festival was bummed out by the weather. Well after the cold front blew in on Saturday night, Björk, perhaps inured to arctic conditions from living in Iceland for so long, was spotted watching Aphex Twin’s outdoor set. She was dancing in the rain.