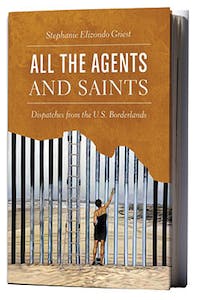 the protagonist of Austin writer Owen Egerton’s third novel, Hollow (Soft Skull Press, July 11), is a modern-day Job: a beloved religious studies professor at the University of Texas who, after his toddler son dies, hits bottom—and believes he might find some sort of solace in an undiscovered land at the center of the earth. There’s profound sorrow to be found here, but great wit too: “I pictured my monthly paycheck stretched over our expenses like a queen sheet on a king-sized bed.”

The great-great-great-granddaughter of a King Ranch vaquero, Stephanie Elizondo Griest spent years globe-trotting before returning to a South Texas she barely recognized, one transformed by drug wars and border walls. In All the Agents and Saints: Dispatches from the U.S. Borderlands (University of North Carolina Press, July 10), she examines what happened to her home by looking for its reflection in a seemingly unlikely place: the Mohawk Nation of Akwesasne along the border of New York state and Canada.

Christopher Brown’s Tropic of Kansas (Harper Voyager, July 11), a near-future dystopia set in and around a wasteland that takes up much of what was once the United States, follows a woman searching for her foster brother amid the wreckage of civilization. If you’re not sure you need yet another dystopian novel in your life, note that this one comes wrapped in glowing blurbs, including one from Brown’s fellow Austinite Bruce Sterling, who calls the book “more American than America itself will ever get.”

Skip ‘The Freak Brothers,’ and Read the Original Comics by Its Texan Creator Instead

How the Alamo Drafthouse Turned Trash Cinema into a Cultural Institution

Escape to the Tropics at Austin’s Tiki Tatsu-Ya

Five Gripping New Texas Thrillers to Keep You Up at Night