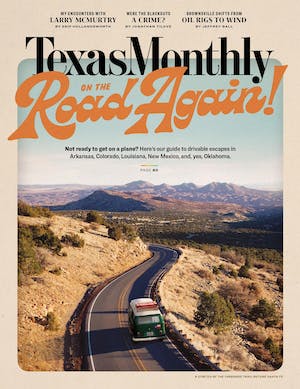 Texans take a singular pride in their state’s politics. Where else can one find such entertaining grandiosity, unpredictability, and sprawling variety in one place? Pretty much nowhere, as the veteran Austin journalist Bill Minutaglio knows. His tenth and latest book, A Single Star and Bloody Knuckles: A History of Politics and Race in Texas (University of Texas Press, May 4), leans hard—perhaps too hard—into the crowd-pleasing nature of Texas public life. This latest installment in UT Press’s Texas Bookshelf series—Stephen Harrigan’s 2019 history of Texas, Big Wonderful Thing, was the first—is a readable, even rollicking survey of a century and a half of political conflict. But though the narrative will offer surprises even for those who know the material well, it too often errs on the side of telling a good story over painting a richer portrait of its subject.

The title’s references to “bloody knuckles” and “race” are key to understanding the book. The first phrase comes from Uvalde congressman John Nance Garner, the pugnacious Speaker of the U.S. House of Representatives and Franklin Roosevelt’s first vice president, who advised that in politics “you’ve got to bloody your knuckles.” Emphasizing the visceral over the abstract and the personal over the structural makes A Single Star and Bloody Knuckles a page-turner. Minutaglio has no use for an academic historian’s need to analyze and classify political movements or issues. For him, the issues matter less than the fight itself.

The one exception—and it’s a big one, as the title indicates—is race. A Single Star and Bloody Knuckles places this fraught issue at the heart of Texas politics as a through line from the 1870s to the present. Minutaglio directly argues that the state’s denial of African Americans’ legal existence outside of slavery was “one of the founding principles of Texas politics”—it’s right there in the 1836 constitution of the Republic of Texas—and even today sets Texas legislators against the federal government over the state’s desire “to keep minorities segregated and forcibly excluded from the democratic process.”

The book’s fifteen chapters are organized chronologically by decade from the 1870s to the 2010s. Among other topics, the early chapters cover Jim Crow, lynching, the oil industry, and Prohibition, while the later ones discuss anti-communism, civil rights, the rise of the GOP, and the decline in Texas of the Democratic party. Near the end Minutaglio emphasizes his personal reflections, giving his stories extra pop. In one instance from the late nineties, the author learned that then-governor George W. Bush’s nickname for him was “Mononucleosis.” He thought this was because Bush found his reporting “persistent and hard to shake.” In fact, Bush simply had trouble pronouncing his name.

Afterlives of the Rich and Famous

Perhaps the oddest gravesite described in Minutaglio’s book is that of the late governor Allan Shivers, which is topped with a statue of “a winged, mostly nude, muscled man standing on his toes and facing the sky,” accompanied by the phrases “Fame is vapor” and “Riches take wings.”

This story is typical of Minutaglio’s tendency to use anecdote, biographical sketches, and a journalist’s sharp eye for detail to relay the tenor of a decade. For example, the chapter on the 1870s, when Reconstruction had its brief moment, is told largely through brief portraits of Governor Edmund Davis (a Republican who supported civil rights for Black Texans), his successor Richard Coke (a Democrat who adamantly did not), and the African American activist Norris Wright Cuney. During his administration, Davis planted flowering shrubs at the Governor’s Mansion; Coke, upon moving in, “stomped . . . down until each of the damned liberal bushes snapped under his considerable weight.” This is an elegant metaphor for the promise of Reconstruction and its tragic, brutal annihilation.

The chapter on the 1910s encapsulates the book’s successes and shortcomings. The dominant conflict here is the clash between two governors, the impeached James “Pa” Ferguson and his successor, William Hobby. The chapter ends with Hobby acidly responding to the corrupt Ferguson’s mockery of his plain looks by joking that at least he knew “the difference between my own money and that which belongs to the state.”

Stories like this are great fun. But the hyperfocus on the personal means that Minutaglio never fully comes to terms with the Progressive movement, with which both governors were aligned. The politics of a century ago, as now, were marked by a significant urban and rural divide over class, ideology, culture, and religion, even among Progressives. Hobby, who spent most of his adult life in Houston and Beaumont, and Ferguson, who hailed from small-town Bell County, were both associated with Progressivism, but they held very different positions on such issues as Prohibition, farm tenancy, and school funding. For similar reasons, the book’s discussions of Populism, New Deal liberalism, and the civil rights movement are less useful than they might be, although in each case they’re narratively compelling. 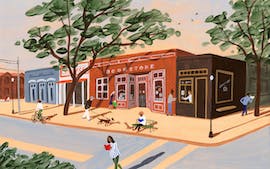 Likewise, Minutaglio’s preoccupation with the final resting places of Texas politicians is entertaining (some of these monuments are as droll and pretentious as you might expect) but not especially insightful. Minutaglio assures us he is trying to examine “how some Texans are honored and remembered—or forgotten and maybe overlooked,” rather than engaging in “morbid fascination.” Yet the gravestones, statuary, and mausoleums say more about the aesthetic sensibilities of these historical figures and their survivors than about how Texans actually remember them.

A Single Star and Bloody Knuckles suffers from another flaw: it offers a flat, monochromatic portrait of Texas’s ruling class. Minutaglio implies that the members of the state’s political leadership resemble an interlocking elite who have spent virtually every election season trying to out-Texan one another in dizzying acts of performance art. While Minutaglio gets the performative part right, his framing leads him astray. When discussing Lyndon Johnson’s entrance into presidential campaigning in the late fifties, for example, he describes Johnson’s shift leftward as a move away from his “conservative roots” and the “ciphers, signs, and symbols he had carried from” the Texas politicians Ma and Pa Ferguson, Pappy O’Daniel, Allan Shivers, and Coke Stevenson.

This characterization is too starkly drawn. Johnson did shift left, much as many regional politicians tweak their positions when appealing to a national electorate. But he was always a complex figure; he had a mixed relationship with the sometimes progressive Fergusons, arguably detested the Trump-like O’Daniel, and distrusted the reactionary Shivers and Stevenson. And he came by his populist roots honestly—they were, among other things, inherited from his politically active father and grandfather and inspired by the hardscrabble poverty that he saw up close in the Texas Hill Country. Well before aiming for the White House, LBJ had at least as many liberal moments as conservative ones.

Minutaglio’s schematic view of Texas politics is reminiscent of—and almost certainly inspired by—the perspective of the late U.S. senator Ralph Yarborough and the crowd that gathered around the Texas Observer during the fifties, sixties, and seventies, who believed that a right-wing, reactionary establishment controlled the state. Reminiscent, too, of the Texas historian George Norris Green’s 1979 book The Establishment in Texas Politics and the theories of the renowned twentieth-century sociologist C. Wright Mills (also a Texan), this top-down, conspiratorial view of politics overestimates the consensus among the political establishment.

Take Minutaglio’s portrayal of Beauford Jester, Texas’s thirty-sixth governor. “People in Austin said that Jester was just another Southern Democrat like Coke Stevenson,” Minutaglio writes, in seeming agreement with that judgment. But though Jester was militantly anti-labor, he was not a down-the-line reactionary. In 1948, the second year of his term, a group of southern Democrats known as the Dixiecrats split from the party over President Harry Truman’s integrationist policies. Jester, though, declined to join them—and in fact supported Truman’s reelection bid and backed a statewide anti-lynching law and a repeal of the state’s poll tax. While Jester was no Bernie Sanders, his record defies Minutaglio’s breezy, offhand dismissal. The bickering of Texas’s ruling class involved more than just personal pissing contests.

This idea of a tight-knit ruling group bound by the political principles that emerged from the violent, racist reaction to Reconstruction gets messier still as the book closes in on the present. The later chapters portray the rising Republican party as heir to those principles and the increasingly multiethnic Democratic party as offering a long-awaited break from them. Yet was Democratic governor Ann Richards, who served in the nineties, really “the last big-time standard-bearer of the liberal Sissy Farenthold–Ralph Yarborough wing of things in Texas,” as Minutaglio writes?

Minutaglio seems to think so, though he doesn’t offer much evidence—perhaps because there isn’t much. Despite all the fawning praise journalists have heaped on Richards, she governed like other centrist Democrats of that era and had more in common with a moderate predecessor such as Governor Mark White than a fiery liberal like Yarborough.

Still, despite its interpretive problems, A Single Star and Bloody Knuckles does the vital work of presenting to a general audience a powerful argument for the centrality of race in the past, present, and future of Texas politics. This is a necessary perspective, given the current disputes over immigration, voting rights, and policing. Minutaglio ends the book with a recent Willie Nelson lyric: “Delete and fast-forward, my son / The elections are over and nobody won / You think it’s all endin’, but it’s just settin’ in.” Perhaps this is a caution to the current crop of activists challenging systemic racism. I prefer to read it as a reminder that making enduring change is difficult. To pull it off, you need to bloody your knuckles.

Carlos Kevin Blanton is a professor of history at Texas A&M University–College Station.

This article originally appeared in the May 2021 issue of Texas Monthly. Subscribe today.