For my taste, Zoli’s makes the best pizza in the Dallas area. The two locations, in Addison and Fort Worth (I’ve visited only the former), are owned by Jay Jerrier, who founded the much larger Cane Rosso Neapolitan-style pizza chain. It’s where I, and much of Dallas, learned to love Neapolitan-style pizza. Zoli’s is his New York–style answer to those who don’t like thin crusts with singe marks from the screaming-hot brick oven dappled on the rim. I love them both, but watching pizzaiolo Lee Hunzinger (who took first place in last year’s Caputo Cup pizza competition) assemble pies at the Zoli’s counter is like watching Todd David slice barbecue at Cattleack Barbeque just down the street, so how could I order anything else?

“It’s hard to pull away from the pizza,” Jeff Bekavac admits. He’s the chief culinary officer for Zoli’s and Cane Rosso. They try their best by adding options like pastas and sandwiches to the menu. The impressive burger, made with ground chuck, brisket, and short rib, even stole my attention away on one visit. But when I go here for pizza, it’s usually to take a break from barbecue. Ordering anything with smoked brisket at Zoli’s usually seems like ordering a salad on cheat day. But because I’m not eating as much barbecue as I normally do, I took the opportunity to load up on smoked brisket at Zoli’s last week, and I was rewarded.

Smoked brisket makes a couple appearances on the Zoli’s menu. It’s on the Meat Fight pizza along with jalapeños, caramelized onions, pepperoni, and a squiggle of barbecue sauce. It’s a good pizza, but the high heat of a pizza oven doesn’t do brisket any favors. Bekavac, a veteran of the Meat Fight barbecue competitions, said he actually prefers the smoked brisket (available as a topping on any pizza) on a white pizza with soppressata marmalade, which is like jam made with spicy salami instead of fruit. Tempt me!

The best option for brisket at Zoli’s is the lasagna. Bekavac, Hunzinger, and Zoli’s chef John Simon (also a Meat Fight competitor) collaborated on the recipe. Bekavac knew it needed to make an impression for people to forgo the pizza. He says, “We wanted to do a lasagna special, but what’s the kicker?” They figured smoked brisket would set theirs apart.

The lasagna starts with an all-beef Bolognese sauce that’s made with the same grind as the burgers. Once the Bolognese is complete and cool, chunks of smoked brisket are folded in so they don’t break down and disappear into the Bolognese while it cooks. “If [the menu] says ‘brisket lasagna,’ we want you to see those pieces,” Bekavac says. And you certainly do. They don’t skimp on the brisket either. A full pan of lasagna is six servings and requires half a brisket for the many layers of pasta, ricotta, and shredded mozzarella and provolone. They even add a few green chiles for heat. One serving is easily enough for two people, but I’d suggest taking the other half home. It’s just as good (better?) the next day.

Zoli’s used to order its briskets from Cattleack Barbeque until it added a new pellet smoker at the Addison location a year ago. The smoker goes through a workout, handling eight to ten briskets a week. “For a pizza place, it’s a decent amount,” Bekavac jokes. He says they use a standard barbecue rub then add some dried Italian herbs to the seasoning. Once they’re done smoking, the briskets are chilled and cut into chunks. Half of it is then sent to the Fort Worth location. You’ll find the brisket lasagna on the menu at all Cane Rosso locations too, but only at Zoli’s do they smoke the brisket in-house.

I had to wait until Friday night to place my order. A full pan can be ordered any day of the week from Zoli’s (and will soon be available to ship on Goldbelly), but the entree can only be had after 5 p.m. on Friday and Saturday. For a $16 entree, it’s a heck of deal. It also travels very well. I opened it thirty minutes after I picked it up, and it was perfect. The tomato sauce is incredible, and has some chunks of tomato in there for freshness. Chunks of brisket are definitely visible, and their smoke flavor isn’t overpowering. I’ll admit that a smoked brisket lasagna doesn’t sound like the greatest idea. This is the only one I’ve ever tried, but it was spectacular. My wife will have to do some persuading to keep us from having it again this weekend. 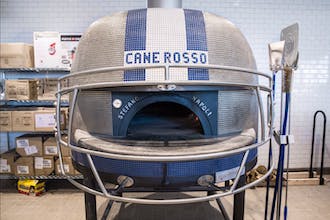