I needed to go back to Bartley’s in Grapevine to clear up a misunderstanding. In my D Magazine article on the Best BBQ in DFW, I stated that Bartley’s used oak in their smokers, but a few commenters noted that they use hickory. I had to get it from the horse’s mouth, so after a cancelled flight at DFW led to a bowl of red at Tolbert’s, I stopped in at Bartley’s for some meat to go. The knife man assured me that they use hickory, so I either mis-heard, mis-remembered, or mis-wrote the errant information about their wood preference. 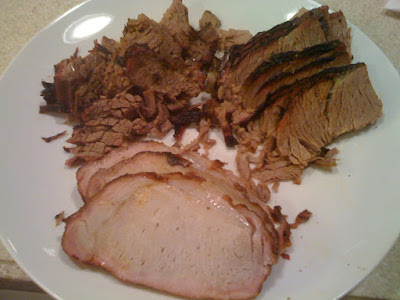 It’s always good to ask for a mix of lean and fatty brisket and not get an odd stare. Instead the knife man just grabbed a beautiful piece of the point and starting slicing. They were out of ribs, so I added some pork loin to the order based on staff recommendation. Pork loin is a tricky cut to smoke because of it’s propensity to dry out due to low fat content. This stuff was perfect. A thin line of nicely rendered fat hugged the bottom of each moist slice. Smokiness ran throughout the cut, and a nice salty rub really brought out the flavors. This should be a new standard for any regular to Bartley’s. The brisket was good as always. Even the lean brisket was plenty moist, and both versions had a heavy dose of smokiness. It made me wonder why it took so long to get back here. This joint can even make you thankful for a canceled flight.