Subway made a bunch of Texans look foolish. These Austin folks were unwittingly involved in the barbecue version of the Taster’s Choice challenge, and they failed miserably:

We don't mess around when it comes to brisket. Okay, maybe just a little. pic.twitter.com/Ldbhkjfk5d

For authentic Texas barbecue, grab your tickets to the Texas Monthly BBQ Fest, coming to Austin on November 3.

Smoked Dallas brings together twenty of the state’s best pitmasters in downtown Dallas this weekend.

A team from California called Mudville BBQ won the invitational portion of the American Royal a day earlier.

Mac Zapata, a seven-year-old from George West, Texas, scored thirteenth in the kid’s division at the American Royal.

The Smoke Sheet took a Fort Worth barbecue tour and shared why they’re so excited about what’s going on the city.

De’Andre Jackson took his success with Winner’s BBQ in Plano to a second location in Cedar Hill. A third location has just opened in Pflugerville.

The Dallas area already has a Pappas Bar-B-Q, but it just got a new location of the more upscale Pappas Delta Blues Smokehouse in Plano.

Order the ribs at Patriotic Pig in North Richland Hills, but you might want to go packing heat, says the Star-Telegram.

Finally in Houston Area HEB’s, very good and will save about 16 hours of cooking.

CultureMap Houston named its top one hundred restaurants in town, and ten of them are barbecue joints.

“Craft barbecue is reconnecting with its meat market origins,” says the Houston Chronicle.

Steven Raichlen discussed the barbecue trends he’s seeing as he heads into a new season of Project Fire, and he’s really trying to make brisket steaks a thing.

Food & Wine featured a crop of Texas pitmasters they feel represent the next generation of Texas barbecue.

Two James Beard-award-winning pitmasters are coming together in Oakland for a barbecue event. Rodney Scott will provide his whole hog barbecue, and Aaron Franklin will smoke some briskets.

Look closely. That’s not a brisket:

Brendyn Todd, “cried like a baby in my truck,” the day before his barbecue truck opened in Nacogdoches. Then the twenty-hour days started, but he’s still loving life at Brendyn’s BBQ.

Buddy Haga, the pitmaster of Buddy’s BBQ in Bedford, which is known for its towering Zeke sandwich, has passed away.

The passing of Nick Vergos of @Rendezvous_Ribs is such a huge lost for Memphis and for the BBQ community in general…https://t.co/BFvkgMyYrL

Famous Dave’s will begin testing the Beyond Meat product in its BBQ tacos and nachos in Colorado and Minnesota.

The USDA plans to eliminate limits on line speeds at hog processing plants, and much of the inspection process, once conducted by USDA, will now be done by plant employees.

"If you’re not using a slow cooker to make your BBQ ribs, then you’re doing it all wrong." https://t.co/MwwWBtL3vv

Matt’s BBQ Tacos in Portland, Oregon, featuring the smoked brisket from Matt’s BBQ, was listed as the ninth best new restaurant in America by Bon Appétit.

Matt Vicedomini’s other new restaurant in Portland, Eem, which combines Thai dishes and barbecue, was named Portland’s restaurant of the year by the Oregonian.

“So the beef rib, which is smoked for twelve hours in the Woodlark Hotel’s basement, comes with tomatillo salsa, bread-and-butter jalapeños, and larded flour tortillas because he fell in love with the tacos at Austin’s standout Valentina’s Tex-Mex BBQ.” – Michael Russell, on Bullard in Portland

B’s Cracklin’ BBQ in Atlanta was destroyed by fire earlier this year. Now they’ll open a barbecue counter in October inside a newly remodeled Kroger store.

You won’t even see it coming: 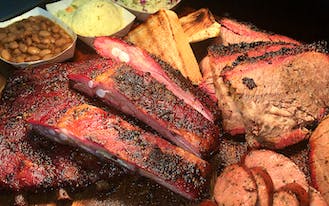 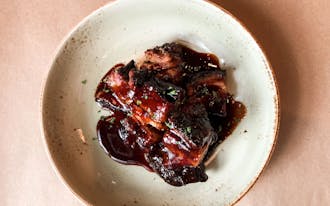 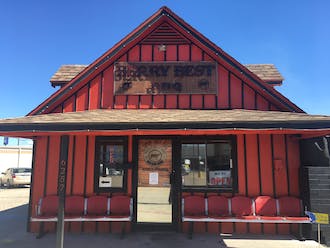