It’s been two years since Texas Monthly published its last Top 50 BBQ Joints list. It was a feat of reporting that took me and my barbecue-eating cohorts across the state to eat at countless legendary restaurants, holes-in-the-wall, out-of-the-way joints. The work didn’t end when the issue went to press. My job since then has essentially been one giant scouting mission for the next list slated for the summer of 2017. In my travels, one thing has become obvious: there are more good barbecue joints opening now than ever before. It’s getting harder to find a bad meal out there, and that’s something worth celebrating. Rather than wait another two years, we decided to highlight these hard-working and talented pitmasters that have opened joints since our last list came out, as well as a few others that took us a little longer to find.

This list of the top 25 new and improved barbecue joints in Texas is geographically diverse, including places from Harlingen to Farwell, but you’ll notice a focus on Austin. This is not a matter of favoritism. Regular readers of TMBBQ.com know that Dallas is my home, and the barbecue quality here has grown by leaps and bounds. I can also admit a fondness for the great barbecue emerging from Houston. But it can’t be denied that Austin is now the greatest city for barbecue in the world. Surrounded by such impressive smoked meat, anyone brave enough to think they can compete there better be ready to play with fire. This list reflects that bounty of good barbecue.

As for those that who are recognized here, this doesn’t mean they’ll be included on the 2017 Top 50, but it certainly makes them contenders for the next list. If great barbecue joints keep opening at a similar pace as we’ve seen in the last two years, they’ll have plenty of competition.

BBQ on the Brazos

In case you’re not sure where Farwell, Hallettsville, and Wolfforth are located, here’s a map to help. 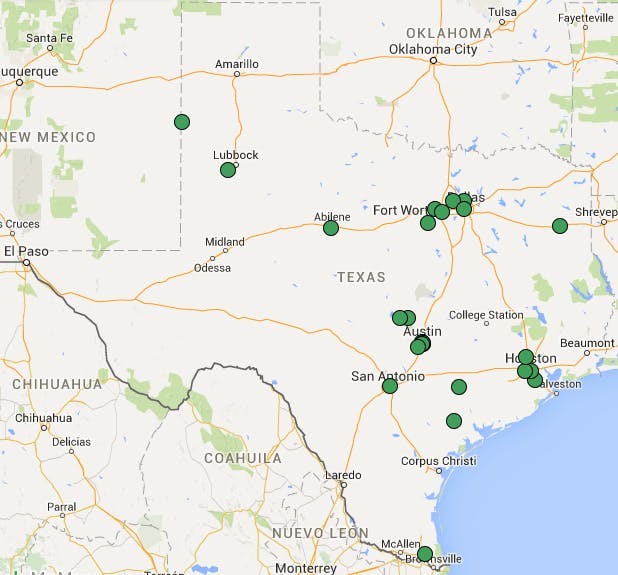