We conclude Daniel Vaughn's weeklong tour of West Texas barbecue joints with the Snyder location of Blackland Smokehouse, which started in Roscoe.

Amanda and Cole Fullwood bought a barbecue joint in 2014, in Roscoe, a small town along I-20 in between Abilene and Big Spring. They were looking to get out of the cotton farming business and didn’t know much about running a barbecue joint, but this one was already established. The previous owners had called it Blackland Smokehouse; the Fullwoods kept the name. Cole ran the pits, and Amanda worked the register. When they were short-staffed a couple years in, she became the reluctant meat cutter. “I was thrown into it,” she recalls. With the business thriving and ready to expand, she took on another new task as pitmaster when they opened a second location, about thirty miles north in Snyder, last December.

Cole tried running the pits at both, but the half-hour drive back and forth became untenable. He now smokes all the briskets at the Roscoe location and trucks them up to Snyder along with all the sides every day. Amanda smokes everything else in the mesquite-fueled Southern Pride in Snyder. The new location is vast, with a full dining room up front and a large warehouse space filled with picnic tables in the back. That’s where they park the food truck that serves as the restaurant kitchen, and it’s also where the barbecue orders are retrieved.

Both Blackland Smokehouse locations are open from 11 a.m. to 2 p.m., which I learned when pulling into Snyder an hour late to find it closed. I came back the following day a little after 1, and their two most popular sides, red potatoes and green chile mac & cheese, were already gone. Both were from Cole’s own recipes. The other standards like beans, slaw, and potato salad—and the less common barbecue side of macaroni salad—were recipes inherited from the previous owners. They’d do themselves a favor to break further away from the mayo-tyranny of the last three, which are pretty indistinguishable besides their texture. Alternating between them, I yearned for the kick of green chiles.

A four-meat platter was a bargain at just $19. The massive spare ribs were the standout. With so much meat on their bones, I’d expect them to be a bit tough, but they were perfectly tender. The flavor of smoke melded well with the simply seasoned salt-and-pepper bark. There may have been a little sugar in there, too. Turkey breasts are smoked with the skin on, so any bites without the skin could use a boost of smoke and seasoning. The slices were plenty juicy. The brisket was also enjoyable. It had a heavy bark and a good amount of fat left on each slice. They were happy to provide a mix of fatty and lean, but I’d go with all fatty the next visit. The jalapeño sausage links from V&V are adequate, but could use a better snap.

The dessert menu offers plenty of options. Peach cobbler had a crisp, sugary coating, and a tender, doughy interior. The pecan cobbler and banana pudding were also tempting, but I grabbed a house-made caramel and chocolate brownie instead. The salty snap of the crushed pretzel crust was great in what was more of a dessert bar than a brownie. It was even better after warming a bit in the sun on my dashboard.

This is my second visit to Blackland Smokehouse. A stop in the Roscoe location in early 2017 brought decent brisket but dry turkey and ribs. Amanda said that could have been when they had an inexperienced meat slicer. Her hypothesis bypassed a golden opportunity to say she’s a better cook than her husband. “It’s hard to trust somebody with the meat cutting,” Amanda said, so she does the cutting herself in Snyder. It helps that they’ve got more than the two-person team they started with in 2014. Between the two locations, they’ve grown to ten employees and show no signs of going back to planting cotton. 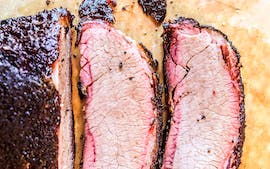 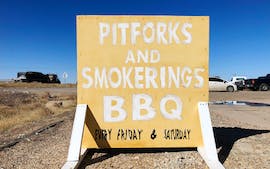 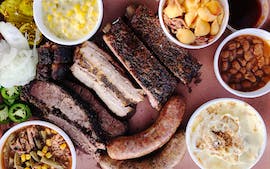 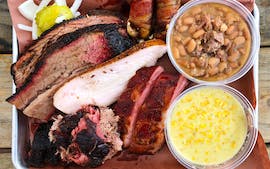