This week, join Daniel Vaughn on his tour of West Texas barbecue joints. For his third stop, he headed to Pitforks and Smokerings BBQ in Slaton.

When you take the highway exit into Slaton off of Highway 84, you don’t encounter the fast food or fueling options usually found off the interstate. If you follow the dust from the cotton gin toward a repair shop called Hwy 84 Service, you’ll find the gas pumps that once sat under their expansive awning have been removed to make way for a couple of steel smokers. You can still get an oil change and a flat repaired for $10, but Thursday through Saturday you can also stop in to visit Pitforks and Smokerings BBQ.

Isaac Arellano grew up here—not just in Slaton, but on this property. His father Cruz Arellano purchased the service station just before Isaac was born. “My first toys were a 9/16-inch and a 1/2-inch wrench,” he joked, pointing to the corner of the lobby where his playpen once sat. Arellano still works at the service station with his dad, but switches to barbecue on Thursday. (His dad also runs a small breakfast burrito shop out of the same kitchen.) His wife Ashley teaches cosmetology to high school juniors and seniors during the week, but on a recent Friday visit she worked the barbecue counter during her 90-minute lunch break. I asked if her students comment on her post-lunch aroma, and she replied, “I always smell like barbecue.”

Isaac didn’t grow up smoking meat, but he caught the bug after a memorable trip to Cooper’s in Llano. He wanted to recreate the flavor of their brisket. The quest led him to a few barbecue competitions before he started offering smoked meat by the pound outside the service station late last year. Ashley said they’ve steadily added hours and menu items since then, and now offer a full barbecue menu on Friday and Saturday. The barbecue tacos on Thursday night have proven to be popular as well.

Ashley makes the sides and pickles, both dill spears and a batch of sweet pickles just right for the nearly-mashed potato salad. Her brisket mac & cheese, flecked with black pepper and topped with toasted bread crumbs, is a side dish rich enough for a full meal. She leaves the pinto beans to Isaac, who aims for subtlety. The only dessert (which I didn’t try) was a banana pudding made by a local bakery.

The couple relies on Jackson Brothers in Post to make their fresh sausages. The jalapeño version doesn’t have cheese, allowing the flavor of the pepper to stand out better. It’s a great link. Thick ribs get a dose of chile powder heavier than I’ve had on a pork rib, but the flavor worked. Issac is finally happy with them. “I could screw up some ribs,” Isaac said, recalling the many competition tricks he’d tried unsuccessfully on his past versions, like honey and butter. The juicy smoked turkey was also spectacular.

Customers haven’t complained much about the recent $2 hike in their brisket price, which is now $16 per pound. They had to raise it after a switch to prime briskets, which has served them well. Ask for a slice of both lean and fatty brisket on your barbecue tray, because I couldn’t pick a favorite. The buttery fat carried the smoke and salt flavors supremely. Isaac hasn’t been doing brisket for long, but said that leading up to the opening, he smoked at least one brisket every weekend for six months. The practice paid off.

One challenge out on the South Plains has been wood selection. They prefer to cook with oak and usually get it from a supplier in Lubbock just up the highway, but a few weekends ago, the supplier had only mesquite to offer. Isaac heard that some Oklahoma oak had been shipped into tiny Nazareth, Texas. Isaac hooked up a trailer for the three-hour round trip and even swung out of his way over to Levelland to drop a quarter cord of wood to the folks at Embers Barbecue to tide them over for a day. He said the barbecue joints in this part of the state are a community rather than competitors.

Isaac got emotional when talking about the property that houses their new barbecue venture. From the time his dad cashed in his life savings to buy the place, this lonely piece of property along a West Texas highway has sustained his family financially. He and Ashley see barbecue as the next chapter. “It’s exciting, it’s nerve racking, but at the same time it’s well worth it,” he said about jumping into the restaurant business. It’s also exciting to find a new crop of great barbecue joints like Pitforks and Smokerings BBQ that are quickly making this part of the state a new barbecue destination. 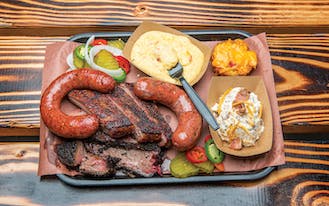