Two years ago, Dusty Miller unwrapped a shiny espresso machine and placed it on the counter inside Miller’s Smokehouse, a Top 50 joint in Belton. The La Marzocco brand machine, imported from Italy, cost more than any of the thousand-gallon smokers in their pit room. Imagine a coffee shop owner in a small Italian town shipping a Moberg smoker to the old country so they could dabble in Texas-style barbecue. No one on staff at Miller’s really knew how to use it, and the Millers weren’t sure whether folks in Belton would even buy espressos and cortados once they figured it out. They’ve since found those customers and are now roasting their own beans under the Penelope Coffee Co. label. They’ll soon put their coffee program more into focus when Miller’s Smokehouse opens for breakfast hours in early January.

The Miller family’s passion for barbecue has grown since Dirk Miller began selling smoked sausages and crockpot pulled pork out of his taxidermy and deer processing shop in 2008. Everything about their barbecue business has grown since then: the quality, the menu options, and the barbecue joint itself. They moved into their new space at the corner of Central and Penelope in late 2016 and made their second consecutive Top 50 BBQ list in 2017. Dirk Miller decided to close his deer processing operation that same year, and in 2018 son Dusty convinced him they should get into the coffee roasting business.

Having had enough of brewing coffee with other people’s beans, Dusty found a building down the street from the barbecue joint to house their roasting operation. A new San Franciscan roaster was delivered a year ago, and Penelope Coffee Co. was born. Dusty has been working with Amadeo Chapa, the general manager of Miller’s Smokehouse and the newly appointed roast master for Penelope Coffee, on adjusting their roasting profiles. Now they have several varieties of roasted beans available for sale online and at the barbecue joint. Chapa said the Ethiopian beans have been the most popular off the shelf, but they use their Guatemalan beans for most of the in-house coffee options.

Miller has always been a coffee drinker, but he started getting more interested in coffee culture a few years ago. “It started more as an addiction to caffeine,” Miller admitted, but he and Chapa began exploring serious coffee operations around the state. They experienced great barbecue and great coffee together for the first time during a trip to Cuvée Coffee in Austin. They brought a brisket to owner Mike McKim, and he shared some espresso. “When you’re learning how to cook barbecue, you may meet three, four, five people that give you tips and tricks, or they try your stuff and they’re willing to help, and it accelerates you five years down the road. It’s the same with coffee,” Miller explained. He credits McKim as a mentor as well as Kevin Sprague of Noble Coyote in Dallas, who shares knowledge and tasting notes with them. Don Cox of Bald Guy Brew in Boone, North Carolina, has also been a great resource for them. “We mail him coffee every week,” Miller said.

There are so many parallels between coffee culture and our current barbecue culture. There’s a value in simplicity and letting ingredients speak for themselves. A willingness to share information with those trying to break into the business is common for both industries. Miller also pointed out the similarities of roasting coffee beans and smoking meats. “It’s like cooking a brisket in fifteen minutes or less,” he said of coffee roasting. “Your roaster is your pit; the beans are the grade of meat you’re choosing to use,” he added, noting that one must adjust the duration and intensity of heat along with airflow in and out of the roaster to get the preferred flavor out of the beans. Chapa said once they hit on the right combination of variables, it’s pretty easy to replicate thanks to their rigorous note-taking on every roast.

I stopped in recently to Miller’s for some dessert and coffee in the late afternoon. I wasn’t alone. As Miller points out, plenty of locals come in just for an afternoon pick-me-up. Desserts, made by Lisa “Mama” Miller, now represent 10 percent of sales, and there’s a full dessert case next to the coffee counter as well. I couldn’t resist her signature sopapilla cheesecake and the chocolate pudding cake. Barista Alexa Matthews poured an espresso, a cappuccino, and a cortado for a tasting. I needed some extra energy for the drive back to Dallas, but not quite that much. I focused on the cortado, a one-to-one mix of espresso and steamed milk. It heightened the flavor of chocolate in the cake, and even paired well with a slice of brisket, which has a bit of coffee in the rub.

The Millers are hoping to bring in more folks to experience their coffee and barbecue together. Some minor renovations are required in the Miller’s Smokehouse kitchen to accommodate their new breakfast service, which will begin after the start of the new year. It’ll run seven days a week from 6:30 to 11 a.m., when things will switch over to the standard barbecue menu. For breakfast, expect to see brisket biscuits along with new house-made potato rolls stuffed with eggs and sausage, or their special-recipe “wakin’ bacon,” which features a coffee-infused rub. The final menu is still in the works, but Miller describes it as “protein and caffeine.”

I asked Dirk Miller what he thought about the direction his son has taken the business that began as a deer processing operation. “Almost everything we’ve changed has been for the better,” Dirk said. He’s even getting interested in the coffee side of the business. Penelope Coffee Co. has competed in latte art competitions, where the designs made with steamed milk are judged for their artistry. Dirk, who took up the craft a couple of weeks ago, joked, “The only thing I’ve been pouring over the last 55 years are Diet Dr Peppers and Diet Cokes.” He’ll train with Chapa so he can enter a latte art throwdown in Austin next year. Chapa and Matthews, the barista, will also be competing. Dirk isn’t intimidated, promising, “In six months I’m going to beat at least one of them in a competition.” I guess it can’t be any more difficult than learning to smoke a brisket or mount a deer head. 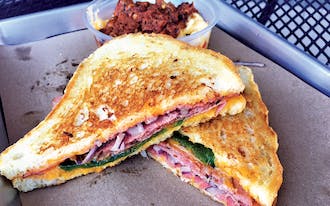