Thousands of drivers a day pass through Giddings along Texas Highway 290 on their way between Austin and Houston. They would all do themselves a favor if they stopped right in the center of town to sample the fine meats smoked at City Meat Market. This is a true meat market with cases full of steaks, ground beef, and sausage right inside the door. Walking back beyond the cases and through the small dining area, all the while drawn by the seductive smell of post-oak smoke, you find the entry door into the pit area simply labeled “IN.” 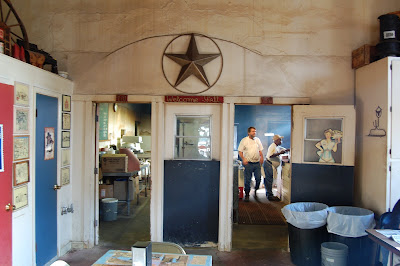 All that now separates you from the smokers full of meat is a short counter and the friendly pit boss, Gerald. He was happy to slice my order of brisket, pork ribs, and sausage and curl it up on a pile of butcher paper. The ribs and sausage were taken straight out from under the heavy smoker lid, but Gerald pierced the brisket with a large carving fork and lifted it from a metal vat full of a deep brown liquid. He explained that instead of wrapping the brisket to keep it moist, he stored it in a vat of captured brisket juices—a smoky Central Texas au jus. No matter how it’s stored, all of the meats came out picture perfect and steaming hot. 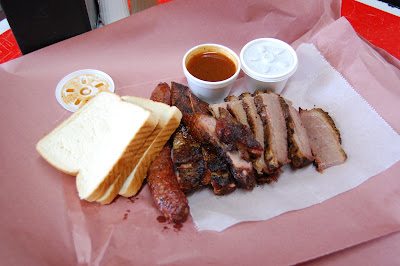 The sausage was an enigma. City Meat Market supplies Snow’s with their sausage, and it was delicious and smoky just thirty minutes earlier in Lexington. This version had the same texture but was drier, far less smoky, and simply not as good in this reviewer’s opinion. The brisket was excellent with a nice smokeline, and the crust had not deteriorated as you might expect with it soaking in liquid. Another thing that you’d expect from soaking the brisket is that it would stay ultra moist, but this wasn’t the case. The tender slices were slightly dry, but the fat was well rendered and the smoky flavor ran deep. The ribs were the best and smokiest offering with a heavy salt-and-pepper rub over a deep-red crust. The meat was moist and flavorful but a little on the tough side. Overall, this is obviously a joint that pays close attention to their meat and takes great pride in the product they turn out, but they weren’t quite up to five-star standards on this day.