Smoke Over the Water

The most insightful thing David Chang said about barbecue recently wasn’t even in the barbecue episode of his Netflix series, Ugly Delicious. In the first episode of Chang’s new podcast, The Dave Chang Show, he describes a special category of cooks to The Ringer’s Bill Simmons. “You have the sushi guy or the pizzaiolo, the guy that does the same thing over and over again, and through repetition they become what the Japanese call a ‘shokunin.’ They become a master of that.” He left off pitmasters, but it’s obvious they belong in this category. “That is like, to me, has always been something I wish I could be,” Chang says, but “I just have too much ADD. I can’t do it because I get so fucking bored.”

Chang is a master at not being bored. He just started a media company, Majordomo, of which said podcast is a piece. His new restaurant of the same name opened to rave reviews in Los Angeles, and the Ugly Delicious series, released in February, has also been well received. I like the series. I’ve watched most of the episodes—some of them twice—and every one of them makes me more angry about the barbecue episode. In that episode, Chang mistreats barbecue. He implies that it’s stagnant, hemmed in by closed-minded pitmasters, and forcibly stifled by tradition. In all of Chang’s explorations, he somehow misses the good stuff right in front of him.

The episode begins with a shot of raw beef short ribs. It’s some blunt foreshadowing. The beef ribs, I would argue, are Chang’s whole point of making this episode, which seems like a drawn-out advertisement for the rack of smoked beef ribs on the menu at Majordomo. For just $190 (about $100 more than a rack of the finest smoked beef ribs in America will cost you at Louie Mueller Barbecue), you can enjoy Chang’s expression of Texas barbecue with a Korean bent. It’s Chang’s answer to his own question during the episode, “What if I could cook Korean barbecue like a good American barbecue place?”

This giant rack of beef ribs, which gets served up at the end of the episode, seem the foregone conclusion of the show and sets Chang up to be our savior from boring barbecue. The bulk of the episode is just filler to justify this instead of an honest look into the history of barbecue or its modern manifestations, even in the tradition-bound setting of Texas.

In the Ugly Delicious taco episode, Gustavo Arellano and Jonathan Gold are guides for Chang and for Peter Meehan, a sort of cohost for the show who explores independently from Chang in most of the episodes. They discuss the roots of taco culture, the Middle Eastern influence of the trompo, and the unfair disdain many have for crispy taco shells. In the BBQ episode, though, a barbecue road trip led by Meehan takes us to Snow’s BBQ so the crew can get a hug and a few tears from celebrated pitmaster Tootsie Tomanetz. I can’t blame them for wanting a hug (and I appreciate the Texas Monthly shout-out), but the scene was as clichéd as the extended gaze of the camera on sparks flying up into the night sky from burn barrels in Murphysboro, Illinois. They’d stopped in Illinois for the Whole Hog Extravaganza at 17th Street Barbecue for the next shot of barbecue enlightenment.

The whole hog class that 17th Street puts on is amazing. It’s the stop for any pitmaster looking to understand multiple ways of cooking a hog, but the classroom setting is a poor place to convey barbecue culture. To be fair, this segment was the one where I actually learned something about barbecue. Carey Bringle of Peg Leg Porker was injecting his hog, but wasn’t using any bottled concoction. His team had harvested the juices from the pig that had collected in the rib cavity and were re-injecting those juices into the meat. It was genius, but it didn’t offer me much on the barbecue traditions of Western Tennessee. It’s as if Ugly Delicious chose this stop to talk to as many pitmasters as possible in one trip. Unfortunately, divorced from their restaurants, from literal place in barbecue, we got nothing of the depth of those various barbecue cultures. Like most shortcuts in barbecue, this one didn’t work.

The Ugly Delicious episode on pizza thoughtfully explores its history with Mark Iacono (of celebrated Brooklyn pizzeria Lucali), who travels to Connecticut (alone) and to Naples (with Peter Meehan) to explore modern pizza culture. The episode also sprinkles in some irreverence from Wolfgang Puck, and Chang even delivers pizza for Domino’s in a segment that could’ve easily devolved into slapstick. In the barbecue episode? We’re dragged along on a trip to China for Peking duck, where Chang is shot down so hard he doesn’t realize or acknowledge it.

At the beginning of the episode, Chang says, “Only Americans say, ‘That’s not barbecue.'” He claims Peking duck to be an obvious version of barbecue not considered as such by Americans. To prove his point, he travels to Beijing to dine with food writer Fuchsia Dunlop at Siji Minfu. What we see is duck cooked in a wood-fired oven with flaming logs at its mouth but no smoke. The fire wasn’t within the oven, but out on the edge. It was a benign flame, but Chang kept trying to insinuate that they were smoking the duck, and therefore making barbecue. Here’s the exchange:

Chang: But the wood is imparting some flavor.
Dunlop: They don’t really want to have a smoked flavor to the duck.
Chang: But when they bring the duck out, they’re giving it a little dance in front of the smoke.
Dunlop, translating for the chef: “No, no, no, no.”

We won’t get too far into the visit with René Redzepi at Noma, the Copenhagen restaurant considered one of the best in the world, which seems to be obligatory for an Ugly Delicious episode. Redzepi cooks some black currant leaves and Brussels sprouts over a few smoking twigs of black currant and spruce, and says, “This is as much barbecue… as a big slab of meat in Texas.” A cut to Chang telling the camera, “Man, that’s so fucking good,” doesn’t acknowledge that instead of some smoke-wilted leaves, he has just taken a big bite of bone marrow. Maybe it’s a wink to omnivores who know better.

Of all the slights on barbecue, the one that was most glaring in Ugly Delicious was that it completely ignored pitmasters of color. In fact, not a single African American spoke on camera. Chang delved head-on into the fraught connection between race and food in an episode about fried chicken (the only one, sadly, replete with black voices). He pulled no punches on the subject of appropriation when talking with the white co-owner of Hattie B’s, Nick Bishop Jr., who specializes in the hot chicken developed in Nashville’s black community. “What if you start killing the very thing that inspires you?” Chang asked. That same kind of examination into the erasure of rural barbecue joints juxtaposed with the ceaseless recognition of urban barbecue would have been interesting if given a shred of attention in the show.

Chang wasn’t without resources that could have bolstered the barbecue episode. One of the greatest thinkers in barbecue culture, Lolis Eric Elie, was prominently featured in the fried chicken episode. The show made a stop at the Buford Highway Farmers Market in Atlanta. It’s just a dozen miles from Heirloom Market BBQ, one of the most exciting barbecue joints in America, which just so happens to mix Korean flavors with traditional barbecue. Why not make a stop there?

In an episode about shrimp and crawfish, Chang vilified the traditionalism of New Orleans and held up Houston’s vibrant culinary scene in contrast. Inexplicably, Chang ignored Houston in his barbecue episode—despite some of the most forward-thinking pitmasters in America living and working there.

Pappa Charlie’s Barbeque was just dishing up brisket spring rolls and has been known to smoke vindaloo-spiced lamb. Greg Gatlin and Michelle Wallace at Gatlin’s BBQ are making their own bologna and serving up barbecue in unexpected combinations. At Tejas Chocolate Craftory, they’ve got mole in their barbecue. The Texas pastrami movement, as exemplified by Roegels Barbecue Co., is all about blending barbecue cultures. Nobody blends Cajun and barbecue together better than joints like Ray’s BBQ Shack and Southern Q. Hell, they even have barbecue sushi up in Spring at Q-Shi. Then there is Blood Brothers BBQ—which Chang has eaten (!!)—a group that has made it their mission to push the boundaries of Texas barbecue. If smoked Thai green curry boudin doesn’t say cultural collaboration, I don’t know what does.

I know the show was filmed a little late to eat at Loro, but why skip Kemuri Tatsu-Ya in Austin? “What if our ancestors had moved to Texas 200 years ago?” Chang asked while eating Korean BBQ at Park’s BBQ in Los Angeles. It’s almost the exact question I asked when writing about Kemuri, which chef Tatsu Aikawa describes as “a Japanese immigrant’s conversation with Texas barbecue.” Get the barbecue tacos at Valentina’s for the best of Tex and Mex. How about trying the very un-Texan whole hog at Cattleack Barbecue in Dallas or the brisket ramen at the Granary in San Antonio? Call me for an itinerary.

My final bone of contention was that none of the barbecue on the show was even remotely ugly, but I digress. The current series is listed as “Season 1.” I’m hoping that means they can remedy the lost opportunity in the second season—in the meantime, friends, please stop telling me how great the barbecue episode is. Chang told his viewers that “people don’t want to mess with American barbecue,” but if he’d just paid more attention to Texas, he’d find that plenty of people have been messing with Texas barbecue, to great results.

Smoke Over the Water 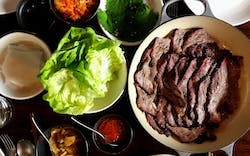