George Gerard didn’t have much time for adjustment to running a barbecue joint. He had planned to leave behind the family business for a life as an electrician in Austin, but his parents pleaded with him to come back home to Beaumont. He relented and a short time later, his father Joseph passed away suddenly. Without much grooming, the business was George’s to run.

Not much has changed since Joseph opened the restaurant in the current building in 1975. Pork bones are still on the menu, and the sausage is still made by hand. In the kitchen, George’s mother Marie was tying the ends of beef casings for each link during my visit.  Later in the day they’d be stuffed with a mixture of freshly ground beef, garlic, paprika, and other spices to make what they call “links” around Beaumont. Links shouldn’t be confused with hot links that usually contain pork and are stuffed into a pork casing. These links are all beef, as George describes. “The only thing that’s not beef on the link is the string.”

The finished links are then smoked in a hulking concrete pit in the back of the restaurant. They smoke at a lower temperature than the other meats, so the pit gets filled with links in their own batch. George estimates that they go through 500 in a week. The beef casings are tough to bite through, so these links are generally enjoyed in the same way as boudin – the filling is squeezed out of the casing. It’s best to capture it all on a slice of white bread, then top it off with the thin sauce made of little more than water, mustard, and chile powder. It’s a true taste of southeast Texas.

That sauce also works well on the ribs. Spare ribs racks are cut across the bone to make a multitude of smaller and easy to handle ribs. The meat is thin and salty, and comes off the bone easily. Each one was gone in just a couple bites, so it felt like a whole rack wouldn’t be that daunting. 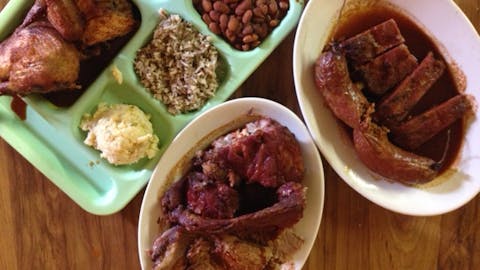 In a restaurant where links and ribs are so popular, brisket can be an afterthought. None of the great seasoning found on the other meats was present on the dull beef. A half chicken was also dry and underseasoned, and a swim in the sauce was badly needed to liven it up. All of that was quickly forgotten with a fistful of pork bones.

“The average barbecue restaurant does not sell pork bones. It’s a time consuming thing,” George told me. They also take up a lot of the room on the pit for not much meat. Pork bones are a regional specialty, and are made of trimmed pork necks. Meat surrounds the bones of the neck, spine, and the first couple of ribs, but it doesn’t provide much coverage. Once the pork bones are smoked, there’s just a thin layer of meat to peel off and enjoy, but it’s well worth the effort.

If you like the bark on a well smoked rib, then you’ll love pork bones. They are essentially 100% bark, and the crispy meat is plenty salty too. The challenge was getting all the morsels of meat off the bone, but it was a challenge that I readily accepted.

Homemade sides were nothing to ignore either. “Everything we sell, we cook,” George told me. The spicy beans start dry, potatoes are peeled for the lightly sweetened mustard/mayo potato salad, and the rice dressing (dirty rice by another name) was fortified with bits of smoked meat.

Dining at Gerard’s is like eating in a time capsule. With so much of the barbecue around the state and around the country trending toward the same smoky and peppery flavors, and historic restaurants adding sweet sauces to their menu to please Kansas City tourists, it’s nice to find a place that has no interest in changing. George told me “We do our own thing here at Gerard’s.” Joseph Gerard built a business on pork bones and beef links, and he would be proud to see the stewardship his son has provided to the foundation he was given.