A Texas photographer for more than 40 years, Amarillo native Wyatt McSpadden has had his work featured in Texas Monthly many times. His coverage of the state’s barbecue scene, along with his 2009 book, Texas BBQ, led Daniel Vaughn to call McSpadden the official barbecue photographer of Texas. In August, McSpadden releases his next book, Texas BBQ, Small Town to Downtown (University of Texas Press), which highlights not only the urban barbecue hotspots but the best country joints as well. In addition to his beautiful photos, the book includes reflections by Austin pitmaster Aaron Franklin as well as Vaughn. McSpadden talked to Texas Monthly photo editor Leslie Baldwin about the book, barbecue, and how it all began. (For more on the book, read Vaughn’s essay from the July issue and view a slideshow.)

Texas Monthly: How did you get started?

Wyatt McSpadden: I started my freelance photography business in Amarillo in 1976. I was doing every kind of assignment: advertising, print companies, anything to make a buck. In January of 1978, I got a call from Nancy McMillan at Texas Monthly to take pictures of Stanley Marsh III, who was an eccentric millionaire in Amarillo, for a story that Gary Cartwright was writing about the Cullen Davis trial. I was beside myself with excitement—the story ran in the March issue of 1978, forty years ago. Just as a sidenote, in 1992, Nancy and I got married. We didn’t know each other before she called. I was her Panhandle stringer for several years, and then our circumstances changed and we started to have a long-distance relationship.

TM: What was your first Texas Monthly BBQ shoot?

WM: My first barbecue issue was in 1997, written mostly by John Morthland, my friend. I think I shot all the pictures for that issue. It was quite a different world then in the barbecue scene. We went down to Kreuz Market and shot the cover image for that on a four-by-five film camera with tons of light. At the time, there really wasn’t any notable barbecue in the cities, at least according to our Austin-centric Texas Monthly biases. All the good barbecue was in small towns: Lockhart, of course, and Lampasas, and Luling, the little towns spread around Central Texas. Through that and additional assignments for Texas Monthly and other magazines, I began to cover the Texas barbecue scene pretty regularly. And I loved it.

TM: How has the scene changed since your 2009 book?

WM: Through work that I’ve done for Texas Monthly and on my own, I have a completely different body of work now. The barbecue scene has changed tremendously because of social media, because of Texas Monthly’s influence, and Daniel Vaughn’s influence. It’s just become supercharged, so it seemed like it was a good time for a second book. In the first book, Franklin Barbecue didn’t exist, and I had missed Snow’s. In the next Texas Monthly barbecue issue, they were declared the best in the state. So, we had a chance to get Snow’s and pitmaster Tootsie Tomanetz into the book. There’s Dallas, there’s Houston, there’s Heim barbecue in Fort Worth, a couple places in San Antonio. They’re all fairly represented in the book. But the truth is, the most interesting places are still the small-town places, just because they’ve been there for decades, aged with smoke and the wear and tear. Another huge difference to me photographically was that the first book was all done on film, which was slow, with a camera on a tripod, and limiting in the amount of stuff you can do as far as light and exposures. In this new book, it’s all digital and a completely different world. This book is much more about catching action without directing it.

TM: Who is the most memorable pitmaster?

WM: There are all kinds of wonderful characters. One of my favorites, who passed away just recently, was Monroe Shubert, who was the pitmaster at Prause Market in La Grange for almost forty years. He toiled in one of the smallest, tightest pit rooms that I’ve ever seen. There was something about Monroe that appealed to me as a subject: he was a cranky old Polish guy, a lifelong bachelor who liked to complain about politics and football and everything.

TM: What is the ideal barbecue tray?

WM: I would put together a hybrid tray, with Franklin’s brisket, the pork ribs from Stiles Switch in Austin, and the sausage at Kreuz Market in Lockhart. Barbecue is better than it’s ever been. All these young guys have come in with energy and passion, and they want to cook like the old guys do. They want to use wood only, no gas.

TM: When is the best time to shoot BBQ?

WM: I always go early. There’s always something going on in the dark. It’s a really good time of day to be there, because there are no customers. It’s the peak cooking time. As the light comes up outside, you get this nice convergence of the interior and exterior light, made by sunlight coming in underneath the awning. There’s a very brief period when something like this happens, backlit and surrounded by smoke. Arriving early also gives you credibility with your subjects. They’ve been at work, they’re awake, they’re caffeinated. If you can hang with them, they like that. If you show up all cranky and you’re like, “I’m so sleepy and I can’t really do anything,” it’s the kiss of death. The righteous rise early and go get themselves smoked in the early morning hours.

TM: Where did you first taste BBQ?

WM: I was in Amarillo last fall, and I wanted to get some good pictures for the book of Doug’s Barbecue, the first place I ever had a barbecue sandwich—back in 1958, when I was six, and it was 25 cents for a chopped beef sandwich. A photographer, Stephen Shore, took a picture of Doug’s in 1971, so I got in touch with him and got permission to use it in my book. Doug’s uses the pit that was there in 1958 and still serves a typical lunch: a chopped-beef sandwich, beans, potato salad—nothing fancy.

WM: My go-to place is Kreuz Market, just because it’s the grandest of all the pit spaces. It’s got a beautiful little porch on the south side where you can sit outside. And then the barbecue is great. 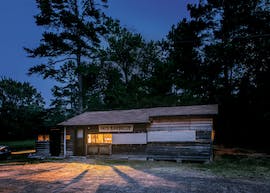 Where to Find the Heart of Texas Barbecue