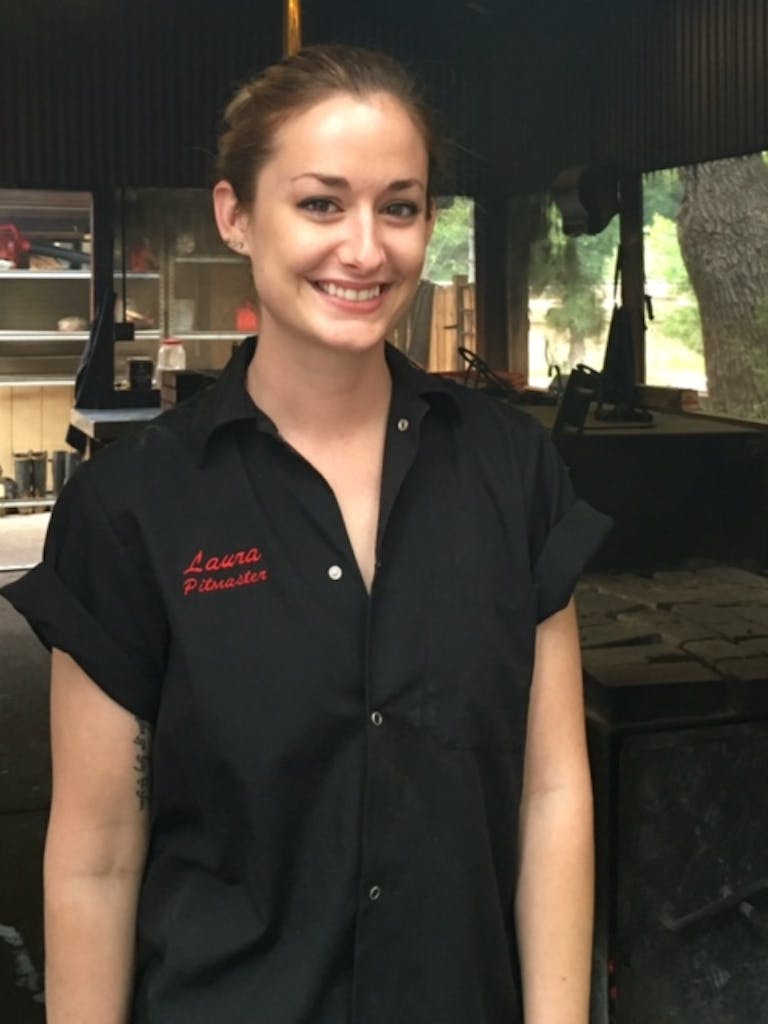 A few years ago, Laura Loomis didn’t think much of Texas barbecue. Neither cooking nor eating it was a big deal in her family, and she admits to never really having a favorite joint growing up. She doesn’t remember eating good barbecue until working for Jason and Jake Dady in San Antonio as a twenty-five year old. She tried their Two Bros. BBQ joint and fell in love. Now she’s the pitmaster.

There aren’t too many female pitmasters around the state, and not many in their twenties either. Loomis understands the rarity, which is one of the reasons she was excited to meet eighty-year-old Tootsie Tomanetz at last year’s TMBBQ Festival. Tomanetz is one of Texas’s most famous pitmasters, and she had some words of wisdom to share with Loomis.

We sat down outside of Two Bros. BBQ awaiting the crowd for a TMBBQ Behind the Pit Dinner. Loomis had been working all day to get the barbecue just right for a discerning group of barbecue hounds. I didn’t hear any complaints.

Daniel Vaughn: Where did you get started cooking barbecue?

Laura Loomis: It was here [at Two Bros. BBQ]. I actually started as a cashier. About a year after I started working here I started cooking barbecue for fun.

DV: When things were slow at the cash register, you’d mosey back to the pits?

LL: I wanted to learn because I wanted to help out wherever I could. I would come in on my days off and do it for fun.

DV: When did you start as a cashier?

LL: Three years ago. About two and a half years ago is when I started coming out here and learning. I just kinda fell in love with it. I didn’t expect to, but then I became a pit hand. There were two other people on the pits who were also pit hands.

DV: Was Emilio Soliz the pitmaster then?

LL: Yes, Emo was here for the first couple of months I was doing it. Then Javier took over, and I became the lead pit hand after about a year. Honestly, barbecue found me. I wasn’t looking to even become a pit hand. It just happened, and I fell in love with it.

DV: It’s a life of barbecue from here on out?

LL: Of course. I’ve got a great group of guys, and we make a good team.

DV: How big is the team that keeps the pits going here?

DV: How long did it take you to feel like you got the hang of cooking?

LL: It took about six months. You just learn little-by-little, then you learn the details and how to tweak things. A lot of it, I taught myself by trying things out. I didn’t have just one mentor. I started reading a lot about barbecue and learning everything I could. There was a lot of trial and error. I messed up a bunch.

DV: What was your biggest screw-up?

LL: Well, we have to rotate the brisket and ribs, so I might leave things too close to the fire and burn it up.

DV: Nothing that almost got you fired, then?

DV: Growing up, did you or your folks cook barbecue?

DV: Where did you grow up?

LL: I was an Air Force brat, so I moved around a lot, but I’ve been in San Antonio for about fifteen years. My whole family is from Texas, so we ended up retiring back here. I’m a Texan, but I didn’t really grow up eating much barbecue.

DV: It sounds like you didn’t know much at all about barbecue until you started working here.

LL: To be honest, pretty much. My parents would take us to Tom’s Ribs here in town. I wasn’t a big fan then. I didn’t like eating it. I started at Tre Trattoria [another Dady-owned restaurant], and I ate here and thought, “My gosh, this is so good.” Then I started cashiering. I really did fall in love with barbecue at Two Bros.

DV: So this place changed your mind about barbecue entirely?

DV: You said you’ve done some tweaking to the processes here. What is the biggest change you’ve made to the way that Two Bros. cooks?

LL: For the brisket, we started using the Yeti [cooler]. We started dropping the briskets earlier in the day, wrapping them at night, and letting them rest longer. When I first started on the pits, they didn’t really rest the meat. That’s something I had to learn about on my own, and play around with it. It makes all the difference.

DV: It certainly does.

LL: Yes. You have to have patience. One thing that barbecue has really taught me about it is patience. Sit back and let it do its thing.

DV: You’ve got the two beautiful brick pits, but I see a few other steel offsets sitting back there too.

LL: We got those last summer right before the Fourth of July. They’ve really helped out because we’ve gotten so busy. 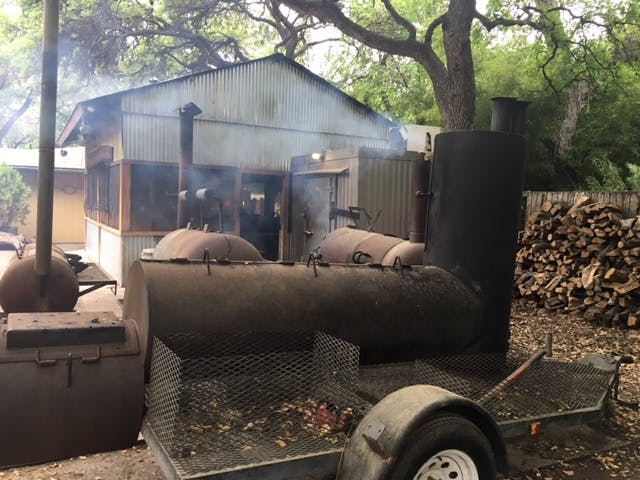 DV: Do the smokers have names?

LL: They do. The ones inside the pit rooms are Brisket Pit, and Left Pit. We’d tried to give them better names, but they didn’t stick. The ones outside are Rusty and Smoky. The two newest ones are Maverick and Goose. Maverick is my VIP these days.

DV: When I’m talking to a lot of barbecue joint owners about who they hire, they usually says its better to hire someone who hasn’t worked at a barbecue joint because they haven’t picked up bad habits. They also don’t come in with preconceived notions about the way things should be done. You caught on pretty damn quick, so do you think that has something to do with you coming in with such an open mind about cooking barbecue?

LL: I’ve never thought of it that way, but now that you mention it, I guess that did help. When I first started I just wanted to learn, to just soak it all in. We’ve had people come in from other barbecue joints, and you’re right. It’s different, and it’s hard, especially at first. I guess it did help to be a clean slate.

DV: You said you learned a lot about cooking from reading barbecue books. Do you have any book recommendations for others who want to learn how to cook barbecue?

LL: I read the Franklin book. I read Smoke too. They both helped. The most helpful thing is just doing it. When I started, I was working with two other people who were also new to it. We were all in it together, so we were talking to one another and teaching one another. It’s another reason I love working in barbecue. Working out here with a team is a great bond that’s hard to explain.

DV: Jason and Jake [Dady, the owners of Two Bros.] have been in this business for a while. Was it difficult convincing them that your way was the right way to do things?

LL: No. I guess, the proof is in the pudding. When the food’s better, it’s hard to argue against.

DV: There aren’t a huge number of female pitmasters across the state, but one of the most famous pitmasters anywhere is female. You met Tootsie Tomanetz at last year’s TMBBQ Festival. Did she share any words of wisdom?

LL: She just said to stick with it, and to embrace the smoke. It was a quick conversation, but she was very sweet.

DV: You’re a young pitmaster, and you mentioned that some folks who work here came from other barbecue joints. Have any of them come in questioning your authority?

LL: Not really. Nobody has questioned it, but some of them call me a unicorn.

DV: Many people who are in barbecue at your young age are in it because they’re parents do it, and they feel like they’re obligated to be in the business. I think it’s great to see someone like you coming here not knowing much about barbecue, but embracing the process, and now you’re the pitmaster.

LL: Becoming a pitmaster was never really my goal. I just wanted to learn. It did just find me, but I can’t complain. I love it.