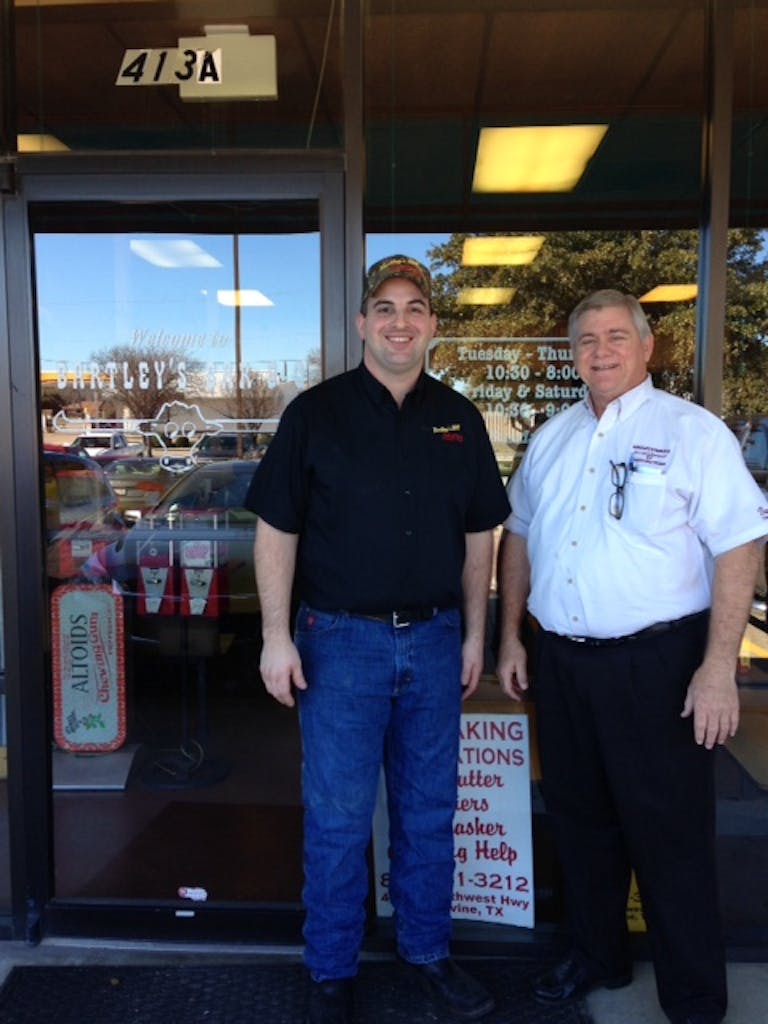 Bartley’s BBQ has changed hands a number of times since it opened in 1968, and it was forced to change locations in the nineties. Shane Wilkinson is the pitmaster, and son-in-law of owner Lynn Owens, and he jokes that this once-temporary location in a strip mall has served them just fine.

Lynn Owens is just getting back into the barbecue business after a hiatus. He took it very hard when his father, who was also his business partner, passed away in 2012. He then had some serious medical issues to contend with. Now he’s back at the restaurant where we all sat down to discuss the history of Bartley’s and how they became a Top 5o barbecue joint in Texas.

Daniel Vaughn: When did you first become the pitmaster here at Bartley’s?

Shane Wilkinson: It’s been three years now, but I first worked here right when I was out of high school. I was here for two years washing dishes and whatever else needed done. My father-in-law, Lynn, would move me out of the way and have another woman run the register when I was going too slow.

DV: Then you got out of the barbecue business for a while?

SW: I was a carpenter, but I was here a lot too. My wife worked here throughout that time too. She was fourteen when her dad bought the place. She would work Saturdays in the kitchen or on the register back then. When she was twenty-one, she took over the catering business as the catering manager.

DV: What brought you back?

SW: In 2012, Lynn’s father died. They had built the business together, and Lynn took it very hard when he passed away. I came in here full time after that.

DV: You’ve got a big menu in here too. Do you have multiple pits, or do you have to cook them all together?

SW: We have just the one. It’s an Oyler rotisserie smoker There’s no gas and no electric heat. It would be a whole lot easier if we had more than one, but we make it work. We put on the chickens early and have to crank up the smoker to get them finished. They cook better at a higher heat, and so does the sausage and the hot links. We slow I back down when that all comes off. 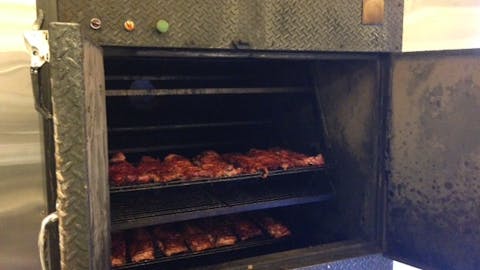 DV: How did you hear that you made it into the Texas Monthly Top 50?

SW: A customer came in and told us. We were all so surprised and so proud if it.

DV: Did that prove to your father-in-law that you knew what you were doing?

SW: It didn’t hurt, but he already felt like I could do it. Being married into the family, any time we had a catering job, I would come in early to help cook. I may not have been here as a full time employee, but I was here once or twice a week filling in where I could. It’s just what you do as a family business.

DV: Did you see a bump in business after the magazine came out?

SW: When the magazine first came out, we definitely had more people coming in to try us out from around the state. A lot of bloggers came in. Then we got a lot of people from say South Fort Worth who had never heard of us. Some have become regular customers. The locals were also proud of the hometown place. Before Grapevine blew up and became this city north of the airport, it was a small country town. A lot of the people that lived here then, still live here. They went to Bartley’s as kids. They’re as proud as if they’re part of us.

DV: Is that a bakery next door?

SW: It is. It’s owned by Lynn’s brother Marvin and his wife Rhonda. They do all of our dinner rolls fresh every day. They also do the pecan cobbler, the cookies, and the cream cheese brownies. Eight or ten years ago they decided to open one right here next door.

SW: Yes. We used to sell our dinner plates with a slice of Texas toast. We still have some old timers who ask for it. I used to go through thirty loaves a toast a day back then, I maybe go through two now. Most people get the fresh rolls.

DV: Do you ever go eat other people’s barbecue?

SW: It seems like ever since I’ve been the manager here, I’m down here all the time. Whether it’s cooking or filling in for people’s shifts. When my father-in-law got sick, he couldn’t help and it all fell on my shoulders. I do try to get around some. A few weeks ago I ate at Meat U Anywhere BBQ down the street. I wanted to keep up with what the competition is doing. We’re actually right in between two barbecue restaurants. Baker’s Ribs is right down the street. Competition has never scared us. If anything it makes us want to try harder. It makes us focus on our cooking more. One thing I had to learn when I started back here is that you’ve got to hit that sweet spot on whatever meat you’re cooking, even if it’s bologna. If you don’t cook it long enough, it just tastes like a bologna sandwich. It needs that smoke. 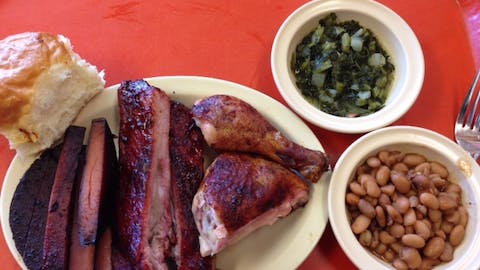 DV: I see that you cut your bologna into thick slices before you smoke it. Why not just smoke it whole?

SW: I tried that once. We put a whole one on the pit to experiment. After about fifteen minutes it had expanded so much that it exploded inside the pit. It looked like a big mushroom. We found that if you slice it, you get a better smoke on it.

DV: You’re a young guy, so you’ve got decades left doing this work. Is that the plan?

SW: Lynn told me that this was a lifetime contract when I came on here. His fishing time has gone way up.

DV: Lynn, these ribs are great. Is that sweet glaze something you developed?

LO: That’s right. The colonel passed away trying to figure them all out.

DV: Can you tell me how Bartley’s got started?

LO: The business had been going since 1968. Marvin Bartley started the business. Bob Burress owned the property down by where the city hall is now. Marvin sold it to Bobby Weddle. Bobby was the postmaster for a while here in Grapevine. Then Bobby passed away, and his son took over. That’s who I bought it from.

DV: Was it still down at the original location then?

LO: Yes. We stayed there for five years. I miss being on Main Street, but I don’t miss that old building.

DV: Why did the business move?

LO: I don’t want to rehash all that. [The city bought the previous building and demolished it to make way for the new city hall].

DV: How did you find this location?

LO: A city councilman, Mr. Ware, was friends with Mr. Waylon who owns this building. They got together and made a deal so I could move the business and not lose it. They wanted to keep Bartley’s in Grapevine. I think the city felt bad about what had happened. 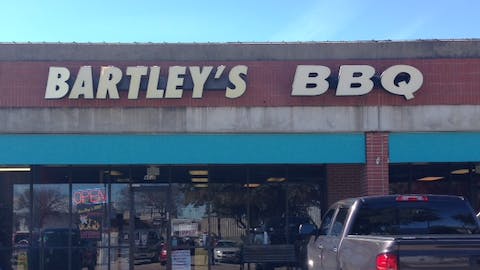 DV: How did your brother come to move his bakery in next to you?

LO: He has several bakeries in Waxahachie and Midlothian. He sold them and was working with me. He had a meat market and grocery store and that’s where I learned to barbecue. I had grown up in my dad’s meat market in Lake Wells, Florida called Owens Market. My brother spent thirty years in the meat industry down there, then he opened his own meat market in North Richland Hills, also called Owens Market. I went to selling insurance, and decided I’d go work with him instead. We built our first smoker out of a watering trough that we found in a guy’s pasture. We brought it out, cleaned it up, and welded some parts on it. We made a smoker out of it, and that’s what I learned to make barbecue on. We listened to what the customers liked and didn’t like.

DV: When did you start working for your brother?

LO: I lost everything I owned in 1988, and I had to have something to do, so I started working there. I had three kids. I made just enough to get by. One of my meat vendors told me about a business for sale. The timing was right. I needed a better way to feed my family, so I went over to talk to the guy and made him an offer.

DV: How much did you pay for it?

LO: I don’t know if I want to say that, but I had it paid off in a year and half. It was on the way down when I bought it. I didn’t have an option, so I couldn’t quit. There was no place to go.

DV: And you had just spent all of your money.

LO: Well, I didn’t have any money. I borrowed that from my dad. We got into it and my dad was working as the associate pastor at the church. A new pastor came and they didn’t keep him on, so he needed something to do. He came to work for me. When I was little, I worked for him for $0.10 an hour, so when he came to work I offered him the same for a little payback. He stayed with me until he was ninety years old. He told me he’d quit when he was ninety. He did, and then he passed away the same year in 2012. 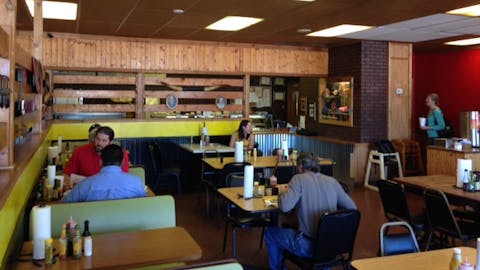 LO: Yes. I took some time off after that. It hit me pretty hard. Then I had liver failure the following year. I got a liver transplant in January of 2014. I was out for two years. Shane just stepped in and ran with it. He’s good at it.

DV: It sounds like we’re lucky to have you here.

LO: You bet. I looked over the edge.

DV: Does it feel good to be back in the business?

LO: Yeah. I missed seeing all my customers. Those two pictures there on the wall, they were husband and wife. He would come in here every day and get the same thing. He’d get peach cobbler, coffee, and a little something for lunch. That was their table there. I miss them.

DV: Having some good help in the back has got to make it easier on you now.

LO: I don’t have to worry about my son-in-law. He wants the same thing I want, and that works out real good.