I called Stephen Joseph in the late afternoon while he watched over his pit. He was trying to get it up to temperature so he could put on the meat he would need for service the next day. Stephen had just returned to Jefferson from Dallas where he provided some incredible pulled pork at an event that benefitted Café Momentum. He was in Dallas last year in November as a judge for Meat Fight and he’s planning to return for the event again this year. This was the most times he could remember taking the three and a half hour trip from Jefferson to Dallas in a single year.

Daniel Vaughn: How long does it take to warm up that pit?

Stephen Joseph: An hour or so. I like to let the wood burn a little bit before I put the meat on. That hour is enough to get rid of the acrid smoke at the beginning.

DV: Where did you start your life in barbecue?

SJ: I started working with Victor and Cindy Williams. They had opened a Bodacious franchise here [in Jefferson] around the late 80’s. I started with them in 1991 right when they dropped the franchise name and renamed it Riverport Barbecue.

DV: Was that in the same building you’re in now?

SJ: No. It was two blocks down on Austin Street.

DV: Are you originally from Jefferson?

DV: Has there been any competition between barbecue joints in town?

SJ: After I took the reins of Riverport in 1993, about six months later a Bodacious Barbecue opened in Marshall which is about fifteen miles from us. Here in Jefferson there’s always been one or two people operating  mom-and-pop barbecue stands a few days a week.

DV: If Riverport didn’t open until the nineties, what was the barbecue like in the area when you were growing up?

DV: If that was your precedent, why does your barbecue taste so different than what you grew up with?

SJ: For years I tried to stay as close to the Bodacious standards as I could, but I realized I needed to separate myself from them if I wanted to make a name for myself.

DV: When was that?

SJ: About seven years ago I started playing with different combinations of wood, rubs, meat quality and various temperatures in the pit. I started using the internet, looking at photos on websites and reading reviews on blogs to get a visual idea of what real barbecue should look like. I tried to mimic the results of some of the better places.

DV: Did you go visit any of them?

SJ: Unfortunately this job is six and half day a week job here, so I never had the opportunity to go outside of East Texas to try much barbecue. I visited most in the area. Stanley’s [in Tyler] and Bob’s [in Henderson] are the only two from the Top 50 that I’ve been able to try.

DV: So you developed most of your methods just from photos on the internet? What sites were you using as a resource?

SJ: I used your blog, Full Custom Gospel BBQ and the earliest one I can remember were the barbecue reviews on DallasFood.org. I also looked at travel guides, Texas Monthly and the websites for the barbecue joints themselves. I took the Top 50 [from Texas Monthly] and looked at all the online reviews from those joints to see what customers liked and didn’t and tried to see what different styles were used.

DV: This was all while you were waiting on the pit to warm up?

SJ: Yep. Just waiting on the pit to warm up.

DV: What type of pit do you use?

SJ: We use an A N Bewley Model 1100.  It’s modified a bit from the original pit. They were modifications we could make when we built the new pit. Now running this pit is just like wearing and old shoe.

DV: Why did you have to build a new pit?

SJ: We had an unfortunate fire on January 15, 2012. There was an electrical fire that got into the rafters of our old building. Within about three hours it was burned to the ground.

DV: How did you hear about the fire?

SJ: I got a phone call around 11:45 from an employee that happened to be driving by and saw smoke pouring from the building. He pulled over, dialed 9-1-1 then called me.

DV: What did you do?

SJ: My wife handed me the phone because I was sleeping and didn’t hear the phone ring. She was handing me clothes while I was on the phone. I live about five minutes away. I got there just in time to see the fire breach the roof on the back of the building.

DV: So you watched your own restaurant burn down?

DV: What was your first thought after that? Did you want to rebuild right away or did you think about doing something else with your life?

SJ: Both crossed my mind, to be honest. At the time I was 43 years old and barbecue is the only adult job I’d ever had. I could have gotten a job with Sysco selling groceries or something like that. In the end I decided I needed to give it one more honest shot to make it work.

DV: When did you reopen?

SJ: We reopened in late June of 2012. We had a celebration last weekend for the anniversary.

DV: It was less than a year after you reopened that you were named a Top 50 BBQ Joint in Texas. How did you hear that news?

SJ: I actually got a text message from my brother Jason. He was watching the announcements on Twitter. He texted me saying “You did it! You made it!” Nothing shakes me up much, but that gave me the shakes a little bit.

SJ: I got a phone call from a fact checker at Texas Monthly one afternoon. I had my fingers crossed, but I was just hoping for an honorable mention. I would have been thrilled either way.

DV: I’ve been to your place and it’s great barbecue. It’s also quite a bit different from others in the area. Have your customers been receptive to the fat and bark and smokiness?

SJ: For the most part. I’ve got a few customers that will request that all the fat be trimmed off. I’m happy to accommodate them, but for the most part the customers are receptive to what we’re putting out. We’ve converted quite a few of them to the new style. 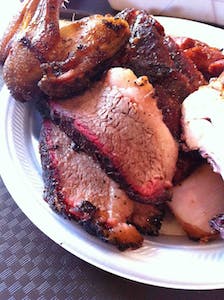 DV: Are you seeing more traffic from outside the surrounding area now that you’re a Top 50 joint?

SJ: Yes. I’ve seen quite a bit from all over the Ark-La-Tex [southwest Arkansas, northwest Louisiana, and northeast Texas] area like Shreveport and Texarkana. There’s not a day that goes by that I don’t have someone mention that they saw us in Texas Monthly.

DV: Are there any plans to expand outside of Jefferson to reach a wider audience?

SJ: We’ll never abandon Jefferson, but we might entertain expanding the business to a larger town in the area. I am forty-five more years old. I have about twenty years left to hammer down and make some decent money for put away for my family.

DV: You once told me a bit of wisdom comparing briskets to pregnant women. Can you share that with the readers?

DV: I know you’ve gotten to know some of the other pitmasters in the state. You were just hanging out with a few of them here in Dallas for the Café Momentum barbecue event. Do y’all share secrets amongst yourselves?

SJ: It’s been an eye-opening experience. I don’t travel outside of my home base much but when I do I like to spend it with people like that. The camaraderie is unbelievable. We do share some techniques, but we don’t give the house away.

DV: With all of the publicity for Riverport Barbecue are you now the most famous man in Jefferson?

SJ: I don’t like to go to the grocery store some days because it can take me a while to get out of there. It’s been a blast. We’re just a little bitty town of two thousand people, but I’m trying to help put us on the map. I’m blown away by how much attention is being placed on this small town country boy. I appreciate it and it’s all due to the hard work that my family and my crew put in every day. I know they appreciate the attention too.