I had the best fried rice of my life at Majordomo, David Chang’s restaurant in Los Angeles that opened in January 2018. But it’s not on the menu—at least, not by itself. The dish arrived at our table almost as a surprise as we devoured a full rack of smoked beef short ribs. It’s a prized but familiar cut of meat at Texas barbecue joints, and has recently been introduced to Angelenos as the new prestige cut of L.A. fine dining. Scraps from the carving of said beef rib, by then an afterthought to our table, had been carted back to the kitchen and used to fortify the fried rice. The rice dish was provided as a sort of lagniappe—something extra for nothing—near the conclusion of the meal. Even the pristine rack of beef ribs was more memorable because of it.

To get a taste of the ribs or the rice requires $190 and likely an advanced reservation specifically for the dish. Five such reservations are available every night at Majordomo, and a few more unclaimed racks go on the smoker for early takers. “I’d love to be able to have it all day,” Chang said, “but there was a day we made ten [extra racks] that we expected to sell on a Friday night, and we had to eat eight of them.” Chang sounded almost apologetic to the future late-night diners who hadn’t planned ahead. They have little hope of trying it unless they beg a better-prepared neighbor.

An eagle eye and a quick trigger on the keyboard are required to snag a seat at Majordomo. A month before my trip, I waited at home constantly refreshing my screen as the time approached when a new day’s worth of reservations would appear for the restaurant. A first attempt was thwarted when all the tables were gone by the time I could enter my credit card information. With flights already booked, I clicked furiously on my screen with frustration until—relief!—a few more tables reappeared. “5:30 p.m., table for four with beef rib” would not elude me again.

Eight dollars is more than I’ve ever dreamed of paying for valet parking to try a beef rib, but that was the only option at the end of a dead-end street beside Majordomo’s front door. We weren’t in Taylor, Texas anymore. The restaurant’s lofty ceiling had a Louie Mueller Barbecue quality to it, but that’s where the similarities ended. The price tag for the beef rib was about double what it would cost for what I consider the best beef rib in Texas, but the accompaniments at Majordomo went far beyond white bread, dill pickles, and raw white onions.

I ribbed Chang about the price when I wrote about his Ugly Delicious series a few months ago. After eating the beef rib, I told him I’d eat some crow. The pricey bill covers a lot of food that comes with the main attraction, along with the elevated costs for rent and overhead that come with a Los Angeles restaurant. Besides, the thinly sliced pork belly and beef ribs don’t come cheap elsewhere, either—Chang says he bases his prices on how much a place in Koreatown would charge. “If you bought as much beef as we’re serving, it’s actually a little bit more at a top-end barbecue restaurant in K-Town,” he said. I enjoyed lunch at Park’s BBQ in LA’s Koreatown, one of Chang’s favorite spots, earlier in the day, and Majordomo’s prices aren’t far off.

The garnishes, or banchan, served with the rib at Majordomo will be familiar to anyone who’s been to a Korean barbecue joint. The accompaniments—pickled daikon and jalapeños, a fiery kimchi, seasoned sesame oil, and a house made ssamjang—stood in admirably for dill pickles and barbecue sauce, and are tried and true for standard, quick-grilled Korean barbecue meats. They went equally well with the smoked version of beef ribs at Majordomo. Ready to envelop it all were leaves of Boston lettuce and a stack of rice paper, both replenished as soon as we requested. Plenty of shisho leaves offered some herbal zing that’s missing on most Texas barbecue platters.

When the fried rice arrived halfway through the Majordomo beef rib experience, I knew I’d gotten my money’s worth. The smoky fat of the beef rib scraps and a bit of sesame oil coated the grains, creating a dish with more smokiness than even the rib meat alone. Shaved horseradish, an obvious complement to the beef rib but an unusual ingredient for fried rice, provided a punch of spice in each bite and another pleasant aroma for the table. A bit of lemon juice and zest at the end aimed to push back against the barrage of gratifying fattiness. Now I know what to do with all future beef rib leftovers.

If the fried rice course is like a duck bone soup, the beef rib shares the careful presentation of a Peking duck carved at your table. The carver rolls out a cart with the whole rack resting on a cutting block. Every diner looks toward your table to gaze at the spectacle while the meat is carefully sliced against the grain. All the pressure is on the carver to select the correct corner to begin the slices on the bias. You can’t really see the beef rib’s grain through the bark, but our carver dove in with confidence and we were rewarded.

The menu calls this dish an “APL Style” beef rib. That’s an homage to chef Adam Perry Lang who perfected his smoked beef rib recipe at the Backlot BBQ pop-up he ran in Hollywood in 2013. Chang was quick to praise APL’s ribs, saying, “all credit to him for teaching me that method.” It’s now on the menu at Adam Perry Lang’s new APL Restaurant in Hollywood. I tried it the night before Majordomo and it was excellent. At $170 (now $180), the original was slightly cheaper than Majordomo, but comes accompanied only with a batch of house-made pickles. It was also cooked a little further along than I expected. Lang is a friend of mine, and I’ve joked with him often about his beef rib method, which usually results in what we’d consider undercooked in Texas. He usually prefers them to have some chew so they can’t be shredded apart like a beef short rib in Texas, but the one we had that night at APL was more tender than I’m used to from Perry Lang. The thick slices slumped under their own weight. At Majordomo, the texture was closer to what I remember from the Backlot BBQ trailer.

When Jonathan Gold reviewed Majordomo, he called the beef rib “a shotgun marriage between the barbecue traditions of Texas and Korea.” He also noted the imperfectly rendered fat as a flaw that made the dish “human, and thus compelling.” I’d argue the point with Gold, and I wish I still could. Chang also said as much. They hadn’t spoken since the Majordomo review, and Chang regrets their disagreements. “I just always assumed that there would be time,” he said. “We never got to sort it out.” But being a bit undercooked, as compared to Texas barbecue, is what truly makes the beef rib “APL style.” The texture both allows and necessitates the thin slices. Thick slices would be too chewy at this level of doneness, and a Texas-style rib couldn’t be sliced so thin. The finished product resembles traditional Korean barbecue more because of it, and provides bite after bite of beef balanced with bark, fat, smoke, and salt.

Chang also tries to mimic the flavors of Korean barbecue with the marinade that every rack sits in for at least eighteen hours. It doesn’t translate as well with this style of cooking, but blame the smoker. I’ve tried using sharp flavors as slathers for beef ribs in the past, but they’re mellowed almost completely after a long smoke. Chang’s beef ribs spend six to eight hours in an apple wood fueled cabinet smoker from J&R Manufacturing, which is a long time for those flavors to survive in a smoker. When Chang joked that Texans would make fun of his choice of equipment, I reminded him that it was built in Mesquite. No apology necessary.

While the smoked beef rib might be a hip new cut to be using in fine dining, Chang has a long history with beef ribs. He always loved garijjim (or galbi-jjim), a Korean dish of braised short ribs. “It’s one of the things my mom would make on special occasions,” he said. Chang also cooked beef short ribs for his culinary final at the International Culinary Center in New York back in 2000. In 2008, chef Dave Arnold introduced him to the forty-hour sous vide short rib, which is finished over high heat for a char. “Whether you grilled it or deep fried it, it gave me that texture of a cooked short rib that was grilled but still soft,” Chang said, with excitement still in his voice. “That blew my mind.”

It was on the opening menu at Chang’s Momofuku Ko in 2008, but it took an incredible amount of time and space to prep. He estimated there were probably ten people who touched that dish throughout the cooking process. That’s why he opted for the smoker, which only necessitated one person to operate it. “The whole barbecue industry has created this [machine] already for maximum efficiency, for high load, and for consistent results,” he said. Because the rib rack is served whole, the kitchen doesn’t have to portion it out for the line cooks to use the following day like they would at Ko. “I don’t have to chill it down,” Chang said, noting that they’re “serving it at its best possible moment.” After a few test rounds, he got the result he was looking for, though he admitted he thought the cooking times would be more standardized. It was a lesson in Texas barbecue when he realized some racks would take hours longer than others.

Chang’s barbecue lessons have paid off with this dish. It’s not Texan, Californian, or Korean. As Jonathan Gold wrote, this rack of smoked beef ribs “is all David Chang.” It’s successful because it’s familiar no matter what end of the barbecue spectrum you’re rooted in. Chang recognizes that, but feels like the real justification comes from how suspicious it may make people from different barbecue backgrounds. “When Korean people eat this stuff they think that it’s sort of wrong,” he told me gleefully, “and if you compared it to Texas barbecue it’s definitely wrong.” I’m glad he’s testing the waters in that delicious in-between space. 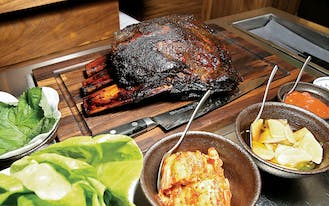