Ah, the chopped brisket sandwich: it’s as ubiquitous to Texas barbecue joints as pump jacks are to the Permian Basin. They’re so commonplace and ordinary, I’ve even criticized them in the past as something far inferior to a thick slice of smoked brisket. But meat on a bun was once the only way you could get barbecue in many parts of Texas. A combo plate wasn’t an option, at least in a large number of barbecue joints operating in Waco, Dallas/Fort Worth and points further north in Texas. Ordering barbecued beef meant chopped beef (often not brisket) on white bread or a white bun. There are still a few around that haven’t adapted to the new fangled menus with pork ribs, half chickens and fatty brisket slices. A couple old joints in Waco still use a cooking method that’s long been out of style anywhere elsewhere in the state–serving Texas barbecue with a little gravy.

In this week’s interview with Billy McDonald of Mac’s Bar-B-Que (1955), he was pretty clear about what folks expected from a barbecue joint in Dallas. In the sixties they moved away from smoking beef navels to beef briskets. “Back in those years it was chopped. Sliced is pretty new. Barbecue in Texas was chopped up with sauce, relish, and onion. That was it.” His menu has now evolved to include combination plates and pork ribs, but those are recent innovations in the nearly sixty year history of Mac’s. Some barbecue joints have never bothered adding such avant-garde foodstuffs.

Dwayne Clanton is 59 and was raking sawdust off the floor of Tom & Bingo’s in Lubbock when he was eight. His dad Tom Clanton moved from Quitman and opened Tom & Bingo’s Bar-B-Q (1952) with Gaston Ray “Bingo” Mills. He brought his hickory wood with him from East Texas and smoked only beef and ham. “We’ve had the same two items since 1952.” Smoked burgers were added later and the sausage just showed up two years ago. Tom may have used beef shoulders to start off with, but Dwayne said it didn’t take long to switch to all briskets. “Brisket back then was not very popular…There used to be a meat company in El Paso called Peyton Packing Company. They told my dad that if he’d buy his hams from them they’d give him the briskets.”

Nowadays, Dwayne still smokes whole briskets over hickory, and sandwiches are still the only option. A raised table in the middle of the restaurant holds pickles, onions, relish and a thin barbecue sauce to customize your sandwich. Some diners choose to sit in the old school desks, but most take their paper-wrapped sandwiches to go.

In downtown Fort Worth, the design of Bailey’s Bar-B-Que (1931) looks like the direct inspiration for Tom & Bingo’s. The only thing missing are the school desks that were removed in 1996 to make way for the few tables that can fit in the tiny dining room. A raised table in the center holds the same condiments found in Lubbock and a similar thin vinegar sauce.

Brenda Phifer, the grand-niece of founder J. T. Bailey, runs the place now. Besides Brenda adding turkey and pulled pork, the menu hasn’t changed much since it opened during the depression. Recalling the menu as she remembers it from her childhood she notes “we had mostly brisket and sausage and we did ham too.” You can’t get a sliced beef plate, but you can get your meat in a to-go box if you’re on a carb-free diet. Phifer herself likes the bread just fine. She eats a sandwich at Bailey’s every day.

You’ll find more school desks at Ernie’s Pit Barbeque (1948) in Greenville where barbecue sandwiches are the feature. As expected, sliced and chopped beef, ham, and sausage are offered with pulled pork being a recent addition. All the condiments are added with the lightning quick hands of the staff who build the sandwiches to order. Get it “all the way” if you want pickles, onions, relish, barbecue sauce, and mustard. Just be sure to get an order of the fresh cut fries. You may find yourself setting the sandwich down to finish them off.

Setting a beef sandwich back down once you’ve started eating is nearly impossible at Jasper’s Bar-B-Que (1915 or 1918) in Waco. Chopped beef is placed on a slice of white bread, topped with a red pepper/vinegar sauce (which is more akin to eastern South Carolina barbecue than most anything in modern day Texas), folded over and dipped in a thin, dark gravy. Think of it as Waco’s version of the French dip. It’s like ingesting an edible time capsule of century old barbecue traditions. Just be warned that the sandwich will disintegrate if you don’t finish it in just a few bites.

Jasper DiMaria opened this place right next to a stop on the Interurban rail line just shy of a century ago. As far as current manager J. D. Bost knows, they’ve been making gravy since the beginning. Back when they received beef forequarters “they cut the meat up and boiled it…the signature item here is the gravy, and that’s what it’s boiled in.” The gravy that results is really a thin beef broth with some spice to it and fortified weekly with beef neck bones. Get there early on Wednesday if you want an order of neck bones. “We open at 9:00 and they’re gone by 9:15.”

If you’re familiar with the barbecue sauce at Louie Mueller Barbecue, this gravy is close, but here it’s kept at a steady boil in a huge vat within the old brick pit. These days, the first step it to smoke the fatty end of the briskets for a few hours in a Southern Pride rotisserie before dunking them in the gravy to boil until tender (they used to go straight into the gravy). That ultra-tender beef is chopped and served with a side of the very gravy that it helped to flavor. Sliced brisket flats that are just smoked without a gravy bath, and sweet glazed ribs are now an option, but chopped brisket on white bread is by far the biggest seller.

The same can be said for Tony DeMaria’s Bar-B-Que (1946) just down the street from Jasper’s. “The majority of people want the meat and bread on paper,” says current owner Geoff DeMaria. The difference in Tony’s and Jasper’s last name isn’t a typo. Legend has it that two brothers, Jasper and Tony Sr., came across from Italy and their surnames were taken down differently in the log books when they emigrated into the U.S. They both made their way to Waco. Jasper opened Jasper’s Bar-B-Que. Tony Sr. had a small grocery store, but he and Tony Jr. went off to World War II together. When they returned to Waco, Tony Jr. opened Tony DeMaria’s Bar-B-Que. A few years later his second cousin Tony DiMaria had taken over for Jasper, so things got confusing pretty quickly when people would ask where to get Tony DeMaria’s/DiMaria’s barbecue in Waco. Despite the two barbecue joints being located so closely together, there wasn’t much of a family feud, but they didn’t exactly collaborate. As Geoff puts it “there wasn’t any hate, but there wasn’t a lot of love either.” As for the barbecue, let’s just say there’s a family resemblance.

Tony DeMaria’s gravy is just as locally famous as Jasper’s. They’d probably tell you there is a world of difference between the two, but tasting the gravies side-by-side showed only subtle variations in spice and viscosity. Geoff uses the exact same recipe as his father, and serves the beef on bread with gravy just like Jasper’s. Unlike Jasper’s, they boil the beef in the gravy first, then it’s finished on a foil-covered rack within the same smoker. All of the heat is generated by an oak fire.

Geoff had a full dining room when I visited on a Wednesday, which is rib day. The ribs and the seating alone were a big departure from his father’s first barbecue joint. “Barbecue was strictly take-out,” when Geoff started working with his father. There also weren’t any pork ribs or even sides on the menu. They were cooking beef, but “nobody was asking for brisket.” Geoff made the move away from ordering beef forequarters in the early nineties, so the beef is all brisket now.  The ribs might rule the roost on Wednesdays, but for most at Tony DeMaria’s it’s still all about the sandwiches.

Our barbecue culture is constantly evolving, but a part of us yearns for tradition. It’s common for us in Texas to think only of sliced brisket on butcher paper as “traditional” Texas barbecue, but these joints have been doing their version of barbecue for over a half century in all cases. These Texas classics just come with meat and bread. 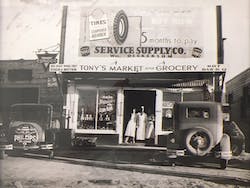 I Say DeMaria, You Say DiMaria 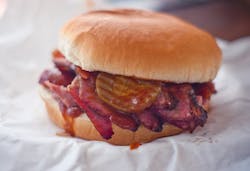