In 2007, John Maywald had a restaurant building that he couldn’t lease out, and he was more than skeptical about using it to run his own place. After nearly four years of sitting vacant, he decided along with his spouse and some friends to fish rather than cut bait. He hasn’t yet quit his accountant day job since he was used to the grind of the weekend warrior circus that is competition barbecue, but they have some very limited hours (every other Saturday and Sunday, aka: call ahead) that hopefully will change given the stellar smoked meats.

An old Oyler pit that he picked up second hand sits within a trailer out back of the joint. Hickory is the only wood that goes in, and what comes out is not the beef broth injected and over-trimmed brisket from the competition circuit. This meat has deep smoke, and perfect meaty texture. The silky soft fat had sucked up any remaining smoke that the brisket missed for an otherworldly flavor. The rub was ingredient laden, but salt and sugar are high on the list, keeping the surface from gumming up. Tender but meaty ribs had the same rub flavor, but with more punch (maybe from MSG). Either way, it was a stellar combo.

I had to fish out the lonely link of sausage from under the pile. It was hiding from embarrassment. There was nothing redeeming from this limp precooked link. It was meant for an oblong white bun, not butcher paper. It honestly had me a bit depressed about the plate as a whole until I bit into the chicken. I can say without hyperbole or any self-doubt that this was the finest smoked chicken thigh I have ever consumed. With the chicken, John was just showing off those competition smoking chops. At the judge’s table, nothing is worse than chewy chicken skin or dry meat, but this thigh had a perfectly paper-thin crispy skin that came away cleanly with every bite through the lusciously moist and tender meat. Smoked chicken is not something I’m used to gushing about, but this was poultry nirvana.

Hard to find at the crossing of two small Farm-to-Market roads just a dozen or so miles north of Boerne, this joint is worth seeking out. With some luck and consistent food, this joint may just find themselves open a few more than four days a month, and the pitmaster can finally put down his calculator. 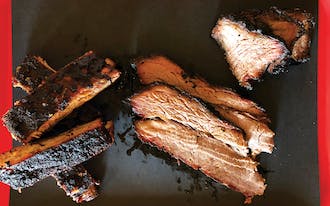