Tom Micklethwait was looking to slow the pace of his big-city life. A couple years ago, he moved from Austin to Smithville, about 45 minutes southeast of the city. His Micklethwait Craft Meats food truck had just been named the eighth-best barbecue joint in Texas in our 2017 Top 50 list, and a second location seemed like a good idea. He found a historic building in downtown Smithville, a former auto shop built in 1949 with concrete bricks cast by the family who ran it. “All these bricks are hand-poured,” Micklethwait told me, pointing to the walls. He and his team lovingly renovated the space, even hand-painting the wallpaper in the restrooms. Micklethwait Market & Grocery would serve barbecue, but they’d also offer fresh baked kolaches and cured bacon. They served free plates of barbecue to promising crowds on their first day in February, and Micklethwait expected to see the joint’s popularity grow locally. It hasn’t.

“It’s quiet. It’s really quiet during the week,” Micklethwait said in a nearly empty dining room on a recent Thursday. “A weekday in Austin is like a weekend here.” He couldn’t pinpoint a reason why, but speculated that lots of folks who live in Smithville work in Austin, leaving the available customer base scant during the week. It’s also proved hard to compete on price with other barbecue restaurants in the area. “I’m shocked at how cheap some of the places out here still are,” he said. He might be referring to Zimmerhanzel’s BBQ, just a few blocks away, where a two-meat plate with three sides runs just $10.49 and a sausage wrap costs less than $2. Micklethwait has dropped the price of its two-meat plate to $14, and the brisket is just $18 per pound (it’s $20 in Austin).

I bit into a pork spare rib that Micklethwait had just unwrapped from its butcher paper blanket at the cutting block minutes before. It was stunning. The flavor of the pork came through beneath the smoky essence. It was salty with a good dose of black pepper. This spare rib was the epitome of Central Texas barbecue. I shared that opinion with Micklethwait. He laughed and told me about a recent interaction with a customer. Ren Garcia is a co-owner and usually runs the trailer in Austin, but he was working the cutting block in Smithville when it first opened. Micklethwait recalled, “This lady walked up, didn’t say a word, slid a piece of paper over to Ren, and walked out. It said, ‘Zimmerhanzel’s ribs are better.'” I guess not everyone in town agrees with me.

The locals are fans of the smoked barbacoa. Micklethwait smokes beef cheeks until they’re tender enough to shred, mixes some of the fat back into them, and serves the result on a sandwich or plate. It’s incredibly rich and works well with a house-made hot sauce Micklethwait has developed for his new taco truck, Taco Bronco. I’ll get into the details of those tacos in a bit. Satisfied with the barbacoa, I didn’t bother trying a slice of brisket. Besides, it’s the same brisket you’ll get in Austin. They smoke all the briskets for both restaurants in Smithville. “It’s good for quality control and efficiency,” Micklethwait said. By efficiency, he means both in labor hours and in wood. They were going through a delivery of two cords of wood in Austin every two weeks. Since they smoke just smaller cuts in Austin, those deliveries now last up to eight weeks.

The overnight cooking in Smithville is done by Tony Olvera, who was new to barbecue when he started work at Micklethwait in Smithville. “I was out here building the pit one day, and he rolled up on a Harley. He was like, ‘I don’t have any restaurant experience, but I really want to learn,'” Micklethwait remembered. “He picks everything up really fast.” Olvera has relieved Micklethwait of some of his workload and will be pitmaster for most of what they’ll serve at Taco Bronco, which Micklethwait describes as a smoked meat taco truck. Brisket, barbacoa, and pulled pork carnitas will be on the daily menu, which will begin service sometime next month in Austin in the old Romanouska’s Deli trailer.

Micklethwait said he’d thought about this taco truck for a while and finally pulled the trigger because of how slow the business is in Smithville. He was expecting to serve just three or four briskets on the day of my visit. They have a full kitchen and plenty of pit space that’s underused by the restaurant. He needed to get value out of all that equipment for barbecue catering and as a commissary kitchen for the upcoming taco truck. I asked Micklethwait if he’d considered closing his new restaurant. He hasn’t reached that point yet, but he admitted, “Austin keeps the lights on in here,” and without the Austin location bringing in so much business, “[Smithville] would have shuttered six months ago.”

That’s disappointing to hear about such a promising new joint, especially in a small town. Big cities like Houston, Fort Worth, and Austin have seen a huge influx of new barbecue options, sometimes at the expense of small-town joints. I love the Micklethwait Craft Meats trailer in Austin, but sitting in the well-appointed dining room of the Smithville location is far more comfortable. They even have a few more menu options, like cheesy scalloped potatoes, savory greens with sausage and rutabaga, and smoked turkey breast. Unfortunately, the “grocery” side of the business, which was supposed to be stocked with raw meats and baked goods, was mostly empty during my visit. The dough wouldn’t rise that morning, presumably because the water used to bloom the yeast had been too hot. The fresh-baked bread that I enjoyed for free on a couple prior visits had been replaced with bagged white bread. When I pointed that out, Micklethwait toasted a couple slices of his homemade bread for me that he’d frozen.

Micklethwait explained that the workload has been getting to him. He moved to Smithville to escape Austin, but he’s found himself driving into the city multiple times every week. Olvera’s work in the pit room has been helpful, but Micklethwait hasn’t yet found a baker experienced enough to take over those duties. “The goal was to have someone here doing all the desserts and baking everything,” he said. Some days, “I’m here sixteen hours a day. I was back to where I was when I started. I worked really hard not to do that.” Despite that, he still has a love for baking and describes the process as even more exciting than transforming raw meat into barbecue. “It’s not like any other kind of cooking, I think. What you start with is so different than what you end up with. Flour and water and yeast, and then it’s any number of breads,” he said, finally cracking a smile.

Micklethwait promised that the lack of bread and kolaches during my visit was an anomaly. Even without them, the barbecue and sides at this location are some of the most carefully prepared you can find in the area, and I can attest that they have the best ribs in town. Micklethwait still holds out hope for an uptick in business. His approach to changing the fortunes of this restaurant is the same as for the getting the next batch of kolaches right. “We’ll start again tomorrow,” he said. 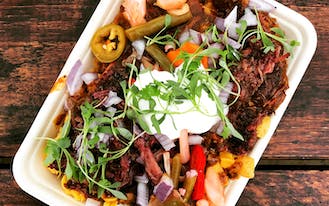 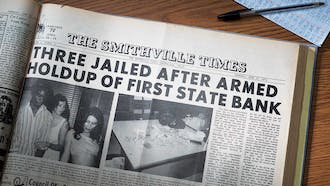 Will the Real Smithville Bank Robber Please Stand Up?