Dirk Miller knows his way around meat. He’s a deer processor, taxidermist, sausage maker and a master at the barbecue pit. Hidden a couple blocks down a side street in Belton you’ll find his small but expanding storefront. On the way there it’s hard to ignore the billboards and prominent location of nearby Schoepf’s right on Central Avenue, but the few extra blocks are painless. It started with a single smoker and a tiny dining area. Now there are a number of steel behemoths belching oak smoke and a larger dining room in the rear of the shop. 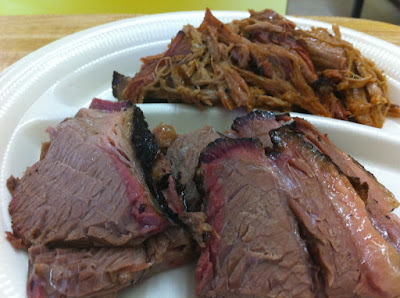 It was a Wednesday, so we were denied the Friday-only pork ribs. We settled for a plate of sliced brisket, pulled pork and all three sausages. Just looking at the brisket, I knew it would be good. The fat was translucent, the crust was black and the smokering was pronounced. With the first bite I was enraptured in oak smoke. This was some of the most deeply smoky brisket I’ve had that didn’t enter into over-smoked territory. The fat was buttery and the meat came apart with ease. A rub of seasoned salt, garlic pepper and black pepper added restrained but necessary zip while still allowing for a crackling bark. Pulled pork was a letdown in comparison. The meat lost most of it’s character after the addition of a sweet tomato based sauce. 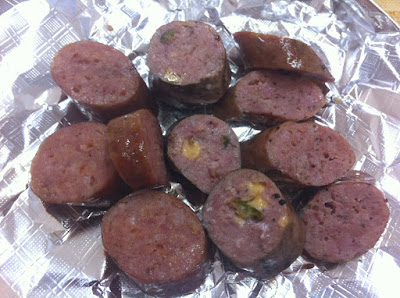 Three sausages are all a beef/pork mix with similar character. All had a fine grind but none entered the too-cohesive texture of a commercial sausage. The original link had a restrained seasoning that was dominated by garlic. A hot link ditched the garlic for paprika and cayenne, but still needed more kick. Jalapeno cheese was the best with large chunks of jalapeno and melted cheese. All three are cooked over direct heat in a silo shaped smoker with five circular racks stacked above heat source of wood coals. Maybe the ones I ate came off the top rack, but they all needed more smoke and a crisper casing. I must give him credit for making three unique sausages in a time where making just one signature link is becoming very rare.

As the meal was finishing I made another comment about missing the ribs and a guy came out from the kitchen with two ribs wrapped in foil. Too many ribs had been cooked for a catering job, so we got some leftovers. They’d been wrapped in foil for a while, so the crust had dissolved a bit, but the flavor from a heavy black pepper rub and smoke was excellent. The meat on the tips was a tad chewy and dry, but I’m sure these issues are worked out on Fridays when the ribs are a menu feature. 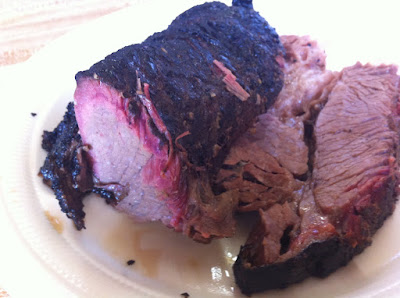 After the meal we talked with Dirk. A student of Texas BBQ, he shares his anxiousness to get to Austin for a visit to Franklin Barbecue and JMueller BBQ after reading Katy Vine’s Texas Monthly article on the two. He showed us the smokers then took us back to the kitchen for some fatty brisket. He cut a large blacked chunk of meat from the back end of a brisket and was visibly pleased when we asked him to keep all the fat on. The slices we had a few minutes earlier were great, but this was otherworldly. Get yourself down to Belton and find out for yourself. Dirk will be happy to serve you.