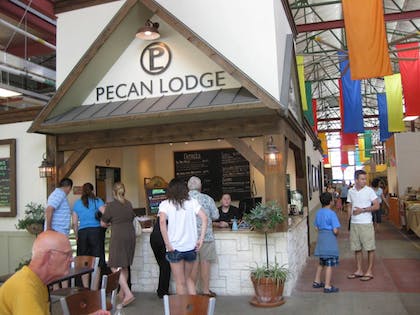 The tenuous relationship between the Dallas Farmers Market and Pecan Lodge now has a path toward closure. Pecan Lodge has decided to move into a stand-alone location. In a report by the Dallas Morning News that they may take a sweet deal from a nearby suburb, Dallas mayor Mike Rawlings made a decree. “We’re not going to lose them to a different city.” Whether or not Mayor Rawlings had anything to do with it, Pecan Lodge will in fact remain in Dallas. As previously reported by Teresa Gubbins, they will soon have a Main Street address in Deep Ellum.

Most disappointed today is probably the Carrollton Mayor Matthew Marchant who most actively tried to woo Pecan Lodge into the suburbs. Co-owner Diane Fourton said that the new location “gives us a chance to start from scratch.” But by moving just one neighborhood over, they have ensured that they won’t have to build a fan base from scratch. Those that visited them at the Farmers Market won’t have far to go to try the new place. The timeline of the construction is still unclear, but Pecan Lodge will remain open in the Farmers Market until they’re ready to move. We’ll keep you informed as more details become available.