California is known for a lot of things—sunshine, wine, earthquakes—but its barbecue scene isn’t one of them. Which isn’t to say they don’t have it at all. There are, of course, the smattering of “Texas-style” and “Louisville-style” and all the other ex-patriate homages to various barbecue iterations. But California has its own style too. Rather, Santa Maria, a coastal town off of Highway 1, between the beaches of Los Angeles and the San Francisco fog, has a homegrown variation that few outside of its border (and fewer still outside of California) have tried or even heard of.

Santa Maria-style barbecue has a rich, local history, one not too dissimilar from our own history of brisket and how it clambered to the top of Texas’s barbecue heap. Its familiar origins start with a tale about tri-tip. As a cut of beef, tri-tip was unknown until the fifties. That’s when Bob Schutz, a one-armed butcher at the Safeway in Santa Maria (you read that right), decided against grinding the triangular piece of bottom sirloin  as he’d normally done, and cooked it on the store’s rotisserie. He loved the result, and started marketing the cut as a tri-tip. When he opened the Santa Maria Market in the sixties, he made it a signature cut in his butcher’s case. Nowadays, when you find “Santa Maria-style” on a menu in San Francisco or Los Angeles, it’s for grilled or smoked tri-tip, which would surely elicit a chortle from the seasoned cooks in Santa Maria. They know it’s about more than that single cut of beef.

Those familiar with the geography of Santa Maria will know that vineyards abound in the area, but it’s good to remember that this was first known as cattle country. According to R. H. Tesene’s book Santa Maria Style Barbecue, barbecue for big events in this area around the start of the twentieth-century were done with large cuts of beef placed on saplings over a trench filled with red oak coals. It looked just like the barbecues held in Texas at that time, and much like today’s community barbecues in Texas. Then, in 1920 the Santa Maria Club was founded and a barbecue pit was installed behind the club headquarters. It was then that the style of Santa Maria Barbecue began to take shape.

The Santa Maria Club was known for its public barbecues. They cooked prime ribs over red oak almost exclusively. The same goes for the local chapter of the Elks Lodge which was founded in 1935. Both organizations routinely cooked barbecue for large parties, and prime rib was the preferred cut for decades. Ike Simas has been a member and a cook for the Elks for six decades. (The Santa Maria Club folded in the seventies.) He told me when I visited Santa Maria late last year that prime rib just got too expensive. They sought out a new beef cut and settled on large slabs of top sirloin, known in the area as “top block” sirloin, which Simas prefers over the better known tri-tip. “I don’t think there’s any comparison between the flavor of a top block sirloin and a tri-tip,” he said without hesitation. “The tri-tip is a little hard to chew and eat, whereas a sirloin that is cooked right and handled right is just like butter.”

At the Santa Maria Elks Lodge, “cooked right” means that the meat is speared on long, steel rods and placed over a pit of flaming red oak logs. Simas continued “Preferably, we get thirteen-pound top blocks in cryovac and we like to age them six weeks minimum. Then, we cut them one time down the middle and fold them over the rods.” The rods can be moved up and down depending on how slowly the meat should be cooking at any given point, and top blocks can take up to three hours to completion. Despite Simas’ preference for top block sirloin, the Elks were cooking 1,100 pounds of tri-tip the day I visited with a few friends. It was Veterans Day and a feast was being held downtown. The Elks were acting as volunteer caterers, so the protein choice wasn’t up to them, but the fuel remained flaming red oak.

It should be noted that when Coastal Californians say “red oak” they’re not referring to the type of red oak that grows in Texas. There are a variety of species in the oak family, and one native to the Santa Maria area is coast live oak. It’s an evergreen with small leaves, and burns clean without creating too hot of a fire. Some of the folks I asked around the Elks Lodge mentioned coast live oak, but most of them just referred to it as red oak.

A huge drying room beside the pit room holds enough wood for about a year. It dries in this room for at least nine months after it has been collected, but there is no hired wood supplier, as Ike Simas explains. “We have a crew at the Elks Lodge. These guys go out every Wednesday and they have their own saws and their own equipment. They don’t cut down any trees. They just trim the trees or cut ones that have fallen.” Given the drought that California is suffering from, it’s far too easy to find the dead trees. 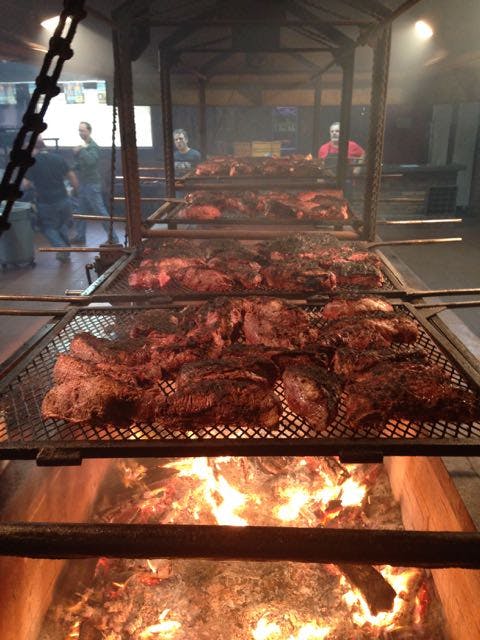 We walked into their fully enclosed cook-house which was more impressive than what you can find at most Texas barbecue joints. An enormous three chamber grill is the centerpiece, and an industrial ventilation hood sits above it keeping the room free of smoke. The cooking rods were left in storage on this day in favor of the grill grates for the smaller tri-tips.

The head of the barbecue committee, Wayne Stahl was managing the operation. Stahl also prefers cooking top blocks to tri-tip, but it’s more a matter of economics. He can get about three times the weight in beef on the pit at the same time if he cooks the thick top block. As for tri-tip, he said “It’s perfect for backyard barbecue,” which I took to mean that it’s not a cut for the pros. Simas doesn’t even bother with it there. “I’m a lousy backyard cook,” he tells me. “Give me the biggies. One hundred pounds and up.”

The beef selection might have been out of the ordinary for the Elks, but the signature Santa Maria seasoning was the same: garlic powder, salt, and black pepper. The accompaniments were also traditional, according to Simas. “The basic menu is salsa, French bread, green salad, macaroni salad—and the meat. Of course, there’s also the Santa Maria-style pinquito beans. That’s very important.” Pinquito beans are a small version of pinto beans grown only in this area of California; the French bread is butter-soaked garlic bread; and the chunky tomato salsa is anything but spicy. You’ll find a similar menu at the many restaurants in town that specialize in Santa Maria-style barbecue, but Simas warns that it’s not the best way to enjoy the essence of the style. “Honestly and truthfully, restaurants can’t serve Santa Maria-style barbecue, at least with the rods. That’s true Santa Maria style-barbecue.”

That doesn’t mean there aren’t a whole range of restaurants that try to duplicate what the Elks have perfected. According to author R. H. Tesene, in 1952 he began holding barbecues on Sunday night at his restaurant The Beacon Outpost. Beans, salad, salsa, and garlic bread were served alongside prime rib. It was likely the first restaurant in the area to serve Santa Maria-style barbecue. Later that same decade, The Hitching Post, in nearby Casmalia, and Jocko’s, just north of town, in Nipomo, started serving barbecue, and in 1958 The Far Western Tavern opened in Guadalupe. Now you can find Santa Maria style barbecue all over the city (for more on area restaurants, check here).

But even without a single restaurant visit, a trip to Santa Maria was worth it just to see the team at the Elks Lodge cook for a few hundred hungry Californians.

– Two publications served as excellent resources for this post. From Sunset Magazine, The West’s Best Unsung BBQ Town provided the impetus for my trip to Santa Maria, and I found the book Santa Maria Style Barbecue by R. H. Tesene at the local chamber of commerce in Santa Maria for $20.